When it comes to the Big Standardized Tests, we know that one thing is important before all else-- not the soundness of the questions or the validity of the test or the value of the scoring or the careful construction of questions that truly measure what they're alleged to measure. No, only one thing matters most--

Protecting the proprietary materials that belong to the test manufacturer. 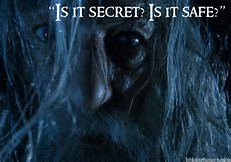 You may recall that last year there was a tremendous flap over PARCC questions and the leaking thereof. Or the continuing issues with the SAT security, or the complete absence thereof.

This may be in part because test manufacturers hate to be publicly outed for the ridiculously bad nature of their materials. There was the infamous talking pineapple debacle of 2012. Or this year when the actual author of some materials on the BS Test in Texas realized she couldn't answer questions about her own work.

But these incidents are merely embarrassing. The real problem with test security is that when a set of questions become compromised, the test manufacturing company has to make a bunch of new ones, and that costs money.

Bureaucrats and test companies have tried a number of approaches to deal with all this. Pearson got caught spying on student social media and demanding that local administrators punish the students involved in security breaches. And during the PARCC flap, all across the bloggoverse those of us who so much as linked to summaries of the questions were hunted down and slapped.

In Pennsylvania, as in many states, we get "training" for test proctoring that frames the whole gig as "ethical standards of test administration," so that I understand that my highest ethical duty is not to my students nor to the local taxpayers who hire me nor to the state that certifies me professionally-- no, my highest ethical duty is to the company that manufactures the test and demands that I keep their proprietary material secret and safe.

Florida (and Pennsylvania, and Georgia, and several others) also goes after the students themselves, requiring children to sign secrecy pledges. Parents are not always in the loop on this. One recent Florida news report shows the sort of outstanding family talks about school that this prompts--

“When I asked her about her test, she started crying and tells me that she can’t tell me or she’ll be arrested,” Rivera said. “I was shocked.”

The instructions that are read to the student, and which the student must sign off on, include the usual list of non-cheaty things (don't help the student next to you) as well as:

Because all the content in statewide tests is secure, you may not discuss or reveal details about the writing prompt or passages after the test. This includes any kind of electronic communication such as texting, emailing, or posting online, for example, on sites like Facebook, Twitter or Instagram.

The actual document reportedly says only that the child "understands" the rules about security, but of course a ten year old thinks signing an official-looking document is a Big Deal. The document wouldn't stand up for five minutes in a court of law, but a ten year old doesn't know that. On the other hand, I couldn't tell you when exactly Pennsylvania started in with this because my students absolutely don't care. They pledge to maintain test security, and they start talking about the test questions roughly the instant they are able. The worst parts of the test still make it immediately onto social media. It's almost as if these students don't care about the negative financial impact of sharing the company's proprietary information.

Reformsters love to use the talking point of putting students' needs ahead of adult concerns, but this demand that students be subjected to an attempt to intimidate them into silence in order to protect the financial interests of test manufacturers is a prime example of putting adult concerns first. Nobody in state offices is asking, "Gee, is it a good idea to try to bully a ten year old into silence by hinting that she'll go to jail for talking to her mom about the test?"

It's abusive foolishness of the highest order. It's oppressive, Big Brothery, and makes a bizarre statement about what's most important in the whole BS Test universe. More than that, it underlines the uselessness of the BS Test itself-- The only kind of test that needs this super-high level of security is a bad one. Well, that, and a cash cow that folks intend to make a huge profit on. It's one more reminder that opting out is still a great idea. The fact that some folks think this is No Big Deal, that of course we would make children swear to uphold the secrets necessary for a corporation to profit-- that in itself is a sign how completely we've lost sight of what really matters here. 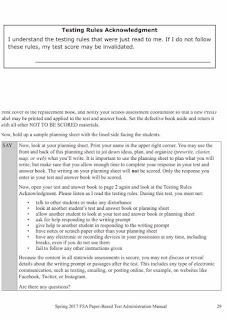