Inspired by the stunning NEPC report on just how deeply and thoroughly charter schools are used as a mechanism for sucking public tax dollars into private pockets, I've been trying to read up on this stuff, in particular by looking through the work of one of the reports co-authors, Bruce Baker (Rutgers University). Baker operates the blog School Finance 101, and it's an excellent resource for those trying to make sense out of the arcane world of, well, school finance.

I'm dipping into Baker's work to lay out one simple progression that takes charters from vexing to terrifying in just a few steps of property acquisition, in the process setting a ticking time bomb. I'm going to try to lay this out in my own words, mainly as an exercise for myself (one of my personal and professional principles of learning is this: want to really understand something? try to write about it), but I recommend you follow the links and read the full originals. (Also, any mistakes in what follows are mine, not Baker's).

In this piece, Baker explains how the taxpayer buys the same property twice, and ends up with no control over it. Here's how I think it works.

I buy a house. Well, I take out a mortgage on the house. But now I'm on the hook financially for the house. I make my payments. I may even pay it off.

Then Chris comes along and proposes to buy the house from me. And Chris's proposal is that I take out a mortgage for Chris, but give Chris the deed to the property.

So now I have taken out two mortgages on the same piece of property. I have bought it twice. And it now belongs to Chris.

STEP TWO: Kick the Can and Light the (Very Long) Fuse

With schools, the device used for getting yourself in debt isn't a mortgage, but a bond.

A bond works like this: I loan you some money, and you promise to pay me regular interest on it. You also promise to eventually pay me back the principal when the bond "matures." That's why the highest-rated, most secure bonds are loans to things like municipalities-- organizations that nobody expects to vanish and skip out before the bond matures and the principal is due. That's important, because a bond is different from stock: when you buy stock, you own a piece of the company, but bondholders own nothing except the bonds.

Here is the scariest chart from Baker's recent piece on Subprime Chartering. 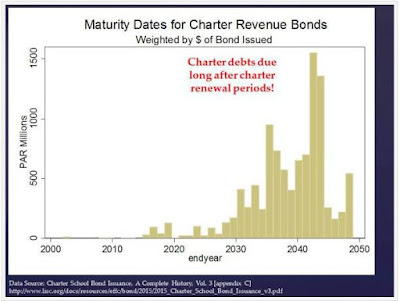 That's right. Billions of dollars in debt is out there, and it doesn't come due for decades-- well after the time that charter businesses have to decide whether or not to stay in the business. If I were an unscrupulous charter operator, I could float my charter on an ocean of bond money, use a variety of devices (see that NEPC report) to shovel that money into my pocket and then, when my renewal time came around, just not even apply to have my charter renewed. The possibilities are mind-boggling and remind me of nothing so much as Bialystock and Bloom in The Producers.

And even if I'm a moderately- or highly-scrupled charter operator, maybe I will do what many charter operators do-- decide that the business just isn't producing the kind of returns I need to make it worth my while, so I'm going to fold up my tent and go.

Remember that much of this debt was not run up by the charters, but "on behalf of charters." So who's left holding the bag, and how many of those bag holders eventually discover that they are holding a bag of air, that the investment has vanished.

Set the whole host of educational issues aside-- is the continued proliferation of charters creating another financial time bomb? Are investors and bankers and venture capitalists and hedge funders creating a future financial catastrophe?

Probably not. I mean, those guys are knowledgable financiers who know what they're doing. Surely the investors and bankers and capitalists would never do something so foolish, reckless and short-sighted that it would pose a serious risk to the nation's economic health.
Posted by Peter Greene at Saturday, December 12, 2015