Campbell Brown's pet PR project went after some union blood this weekend with revelations about AFT, NEA and UFT spending.

Now, when we start breaking it down, there are some line items that seem a bit of a stretch in the outrage department. For instance, the AFT spent $6,700 at Walt Disney World, which is one day's admission for about 65 adults (who don't plan to eat during that day).

But the list also includes cruise tickets, international air travel, and fancy shmancy hotels. The 74 admits that the spending amounts to a small sliver of the total disbursements by the union, and that some of the travel and expense is an outgrowth of international union connections and even some humanitarian work.

The narrative here is a predictable one for the74-- those dollars are dues dollars and union members don't want their money spent on all this foolishness. Writer Naomi Nix has a nifty quote from Jade Thompson, an anti-"mandatory"-dues activist about how much the $800 of dues would mean to a working family. "It's our money," says Thompson, who probably meant to say, "It's our money that we only received in the first place because a union helped us negotiate a fair contract." And we should go back to the sliver. The article, for instance, marks NEA as spending $2.2 million over four years on "luxury travel and hotels." At three million members, that comes to about 18 cents a year in dues money.

But my absolute favorite nominee for Journalistic Insightfulness would be this part of Nix's article:

“They might have very good explanations for this. They might not,” Stanford University politics professor Terry Moe said of the spending on hotels and travel.

Well, you know. I think that just about covers it.

Moe also claims that "if you listen to them." the unions claim they are spending it all on collective bargaining. I don't know. I've been listening to them a long time, and I never got that impression. Moe claims that union spending on politics is like some kind of secret. I'm pretty sure he's wrong.

Look, I'm the last person to defend union spending patterns. As a local president, I went to region meetings that came complete with meals. I've sat through the arguments about whether to spend local dues money on things like retirement dinners and social gatherings. And I've been the teacher grumbling over state-level union people who wear suits that are nicer than anything I'll ever wear ever. There are some items in this article that do make me cringe.

I wish the unions operated on a shoestring and everyone traveled coach and stayed in a yurt. But I also understand that teachers give up time and effort to serve, and if the only time they can meet is during mealtime, then they should eat. I understand that maintaining a stable of experts who can be sent out to any local in need costs money, bot for maintaining and sending. I understand that if I want someone to go represent me in the big leagues, it helps if they look as if they belong in the big leagues. I understand all that, and I'll still vote for Bernie and not Hillary, because I want to believe in a world where it doesn't cost money to play in the big leagues. Of course, I also want to believe in a world in which you don't really need a union because the People In Charge already listen to employees and make sure those employees are treated well. 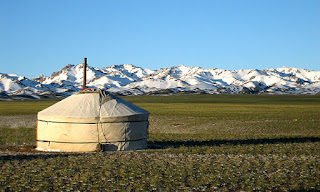 This is a yurt

I wish my union didn't spend big bucks on fancy hotels, especially because when they do, it makes it possible for outfits like the74 to do union hit pieces that throw around big numbers to make the union look bad. But this article was a fishing expedition, looking for a way to slam unions and support the narrative that unions need to be stripped of their ability to collect dues and gain members.