ESSA has just cleared Congress, and the Department of Education is already giving us a look at the freshly sliced baloney that they will be serving at the Ed Reform Buffet. From Twitter, just now: 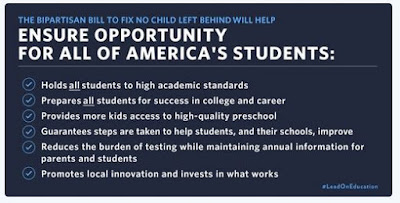 Let's count all the ways this is wrong, because it helps us understand just how USED's vision is messed up.

The federal government cannot hold all students to a high academic standard. The mind boggles at even attempting to imagine how that would work. John King, Acting Pretend Secretary of ED, will stop by my classroom and go over my students' work with them? He'll engage in spirited motivational speeches to get my students to try extra hard.

The federal government is a dozen layers of management removed from interacting with students. They cannot "hold them" to anything. The most they can do is to try to force those of us who actually deal with students to prove, somehow, that we're holding the students to high standards, and then either carrot or stick us for what they think they know.

Prepares all students for success in college and career?

Again, federal law will not do this. But then, USED and Congress and the rest have no idea what "college and career ready" either looks like or means. On this point, we are right where we've been for fifteen years.

Guarantees steps are taken to help students, and their schools, improve?

Again-- what does anyone at USED know about how to help a student learn? And the feds have been "helping schools improve" for fifteen years, with absolutely nothing to show for it. School Improvement Grants were a bust, takeover and turnaround districts have failed to get results, and charters have taught us what we already knew-- that if you have a select group of students in a well-supported fully-resourced school, they might maybe do a little better than the regular pubic school. The jury is still out on how much damage you do to the social capital and stability of neighborhoods when you take their neighborhood school away.

Guarantee steps? You can't even say what the steps would be.

Sorry. My fingers literally refused to type this baloney. ESSA could have reduced the burden of testing and it very carefully and deliberately refused to do so. The burden of testing has not been reduced, and I defy any USED employee to point to a place where the law makes any meaningful attempt to do so. It's the same old Big Standardized Tests-- plus the opportunity for daily "assessments in a can" to suck even more education out of school and pubic education dollars out of the public education system.

Promotes local innovation and invests in what works?

This is a new USED talking point, so I've been trying to unravel it. It appears to mean "We will find new excuses to funnel public tax dollars to private entities like charters and test manufacturers and alternate certification groups like TFA, because we can declare anything a Local Success that we want to. Watch us make it rain, baby."

So this is the new baloney, much like the old baloney. They have missed the one useful feature of ESSA-- a reduced opportunity for USED to inflict its delusions directly on state departments of education. We can only hope that little bit of air between the feds and the states comes into play in the years ahead, because this little bullet list shows the USED has a Grand Canyon's worth of air between itself and pubic education reality.
Posted by Peter Greene at Wednesday, December 09, 2015
Email ThisBlogThis!Share to TwitterShare to FacebookShare to Pinterest