While we're all busy worrying about the big sexy parts ESEA rewrite, like testing, teacher evaluation, and just generally squeezing blood from the public ed turnip so that Educorporations can get their daily dose of Vitamin $$, the folks at American Institutes for Research have been taking a look at less glamorous sections of the law.

You may recognize AIR as the folks who brought us the SBA test, as well as some knockoff testing products for states with CCSS-averse electorates. But they have many, many researchy segments, and one of those has made some recommendations regarding Title II of ESEA.

Those of you who know all about Title II can skip to the end of this paragraph, but you're probably lying. Title II has two stated purposes-- 1) raise student test scores aka "student achievement" by getting more awesome teachers and principals in schools and 2) holding local districts accountable for student test scores aka "student achievement." AIR notes that there are many fed-approved uses of Title II money, but mostly districts just spend it all on professional development. Notes AIR drily:

Sound educator learning activities and resources are critical to effective teaching and leading as well as to continuous improvement in our schools. Yet, 13 years and some $30 billion later, Title IIA has not had the effect on teacher and principal quality or student achievement its creators hoped.

So what do districts actually spend the money on. Turns out its mostly PD and class reduction. 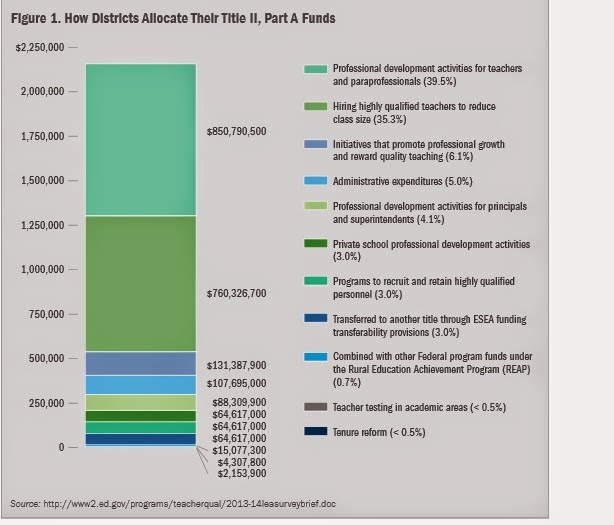 AIR notes that after 13 years and $30 billion, problems persist. Inexperienced teachers are still in high-needs schools, hard-to-staff schools are still hard to staff, principals still burn and churn, the test score gap aka "the achievement gap" is still wide between poor and minority students and everyone else, and we still are getting beaten by Estonia on international tests. Also, instructional quality varies between classrooms and the sun continues to rise in the East.

AIR only rattles off that list to set up their next point-- of course Title II funds can't fix all that, but at the very least it could fund worthwhile professional development. Some research suggests that some local PD is okay, but mostly some AIR research from 2009 finds that "by and large, U.S. teachers have been receiving professional development that is superficial, short-lived, and incoherent."

Now, that 2009 research looked mostly at PD from 2005-2006, so I'm not so sure that-- oh, who am I kidding. "Another professional development session! Oh boy! I'll bet this will be very useful," said no teacher ever. But decade-old research is going to miss the giant increase in a gazillion sessions that could all be loosely titled, "How to do a better job of teaching to the test and getting scores up."

Fun factoid. AIR notes that neither the USED or Congress has ever commissioned post-NCLB research on how effectively the Title II money has been spent. But in 2014, the Gates funded the Boston Group, an organization that's a huge fan of privatization, to find that "although more teachers report engaging in research-based, collaborative forms of job-embedded professional development, even these richer formats leave most teachers cold." According to that report, only 30% of teachers called themselves "highly satisfied" with their PD and only 34% thought PD was getting better.

So, short answer-- Title II as an engine of professional development is a failure.

If you're teacher who has ever sat through professional development, you may have some thoughts about why PD sucks, but AIR is way ahead of all of us. Here are their Three Reasons That Title II Is Failing Miserably (I will paraphrase, translating from the heavy bureaucratese of the report):

1)  PD tries to hard to work on individuals when it should be fixing the "organizational capacity for sustained and continuous performance improvement." They explain this later as emphasizing "teacher" quality instead of "teaching" quality. While AIR doesn't really Go There-- this can only have one implication-- that PD should be about making individuals function better as cogs in the machine.

2) "It contains no incentives or supports for enhancing the strategic management of educator and organizational learning" because, as always, the reformster assumption is that there is no incentive intrinsic to working with students or managing teachers who work with students.

3) It uses a bad definition of "professional development" that doesn't link directly to better test scores.

Now, not everything that AIR has to say is bone-stupid, even if it is in ivory tower gobbeldeeshmear.

That's not wrong (I particularly like the notion of relieving teachers of "non-mission-critical" tasks. But the whole thing rests on somebody, somewhere knowing what the "right" knowledge and the "right" skills are. This is one of the precise moments where reformsters and teachers part ways. The teachers can raise their hands and say, "OOh! Pick me! I know! I can tell you what's needed," but reformsters are ignoring them and making noise about calling in lobbyists/experts and using bad standardized tests as systemic tools.

3) Stop allowing Title II funds to be transferred, swapped or generally used for other things.

4) Finally spend some money studying what Title II is or isn't accomplishing.

AIR has identified a real problem. An awful lot of professional development sucks. But AIR doesn't seem to have a clue of what to do about it, including asking the teachers who actually suffer through it. For instance, AIR seems unaware of Inverse Delivery Law of PD-- the further someone has traveled and the more they have been paid to deliver the PD, the more likely it is to be deeply, terribly awful.

In particular, AIR's idea that PD should not actually address concerns of teachers, but should focus on getting them to be part of a better-functioning piece of machinery seems terribly ill-advised and unlikely to help a bit.

So, could Title II be fixed? Sure. Does AIR have a clue about how to do it? Not so much.
Posted by Peter Greene at Saturday, April 04, 2015