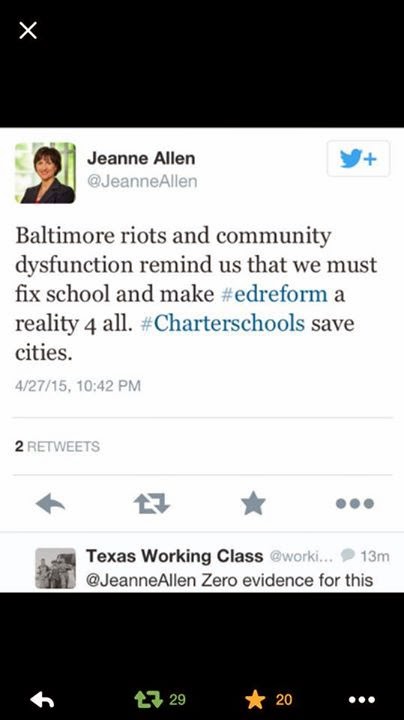 And in my inbox was an email from the folks at The Center for Education Reform, a hard-core charter promoting group.

They shared a story of a mom who was happy to tell how getting her kid into a charter saved his life, and charters had improved her neighborhood. She was talking about DC, but the writer was careful to draw the parallels:

She noted the people in her community haven’t changed since the mid-90s, but school choice has empowered them to make better decisions and aspire for something greater. The nation is watching Baltimore clean up from yesterday’s destruction caused in large part by young schoolchildren that have no choice in a city where violence looks a lot like D.C. did twenty years ago.

Katrina was a golden opportunity for charter promoters to take over a whole city's school system.

Now, the boiling over of Baltimore will apparently be treated as another marketing tool. It's a two-fer; not only are the riots and racial unrest a disaster that trash the city, but they are a disaster created by public schools.

Not jobs. Not reining in a berserk police department. Not a reinvestment in the public schools that already exist. Not a concerted effort to reverse a cycle of social, political and economic injustice that has chewed neighborhoods to bits. Not sitting down with the people who live in the beleagured sections of the city. Not any ideas that might cost money and not turn a profit.

No, we need charter schools, stat. If black boys spent their youth in charter schools learning to line up, sit still, speak properly, and offer no excuses, the Baltimore riots would never happen.

Disaster capitalists have to be ready to jump on the next disruptive opportunity. Looks like the riots in Baltimore could be just the thing.