Back in October, top Biden aid Stef Feldman spoke to Education Writers Association members about ed policy. It was... not encouraging. She didn't make a "firm commitment" about state testing waivers, an odd stance for someone who promised to put an end to high stakes testing. She stood by the "former public school educator" promise, but as many of us have noted, depending on how Biden defines his terms, Michelle Rhee would fit the bill. Blerg. Excuse me-- I gave myself the shivers for a minute there. 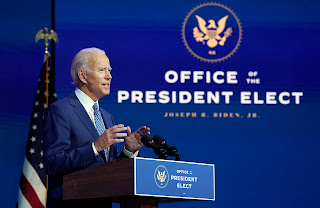 A variety of topics came up. Biden wants to re-open schools by using a massive funding wave to get schools what they need to be safe (including FEMA funding), which is okay, but also using argle bargle like "ensuring high-quality learning during the pandemic." He's going to roll back a bunch of Trump-era rollbacks of Obama-era guidance. More Title I. Boost teacher pay. Nice ideas--I'm sure Mitch McConnell will go right along. SEL. HBCUs. MSIs. Maybe get back to supporting civil rights. Excellent. All fine things.

Also, student loan legislation, police on campus (yes, but with training), for-profit colleges must "prove their value (smh), early learning (the low-hanging fruit of ed policy), repairing school buildings, fund it all with taxes on super-wealthy and big corporations. No on school segregation.

But about charter schools.

As President, Biden will ban for-profit charter schools from receiving federal funding
Nope. This is the old Clinton-era fall back designed to make both charter fans and charter opponents happy. Only California and Arizona allow for-profits in the first place. In the second place, there are plenty of ways to make a ton of money from "nonprofit" charters. So this ban is about as useful as declaring that the feds won't fund any charters located on toxic waste dumps--it's a good policy to have, but it doesn't really address the main issues. Feldman goes on to say that Biden says that the feds will stop funding nonprofits "that don't provide results," which is exceptionally vague (Feldman "clarified" that the USED would have to figure that out). He does score a good point by saying that all charters must "be authorized and held accountable by democratically-elected bodies like school boards," which shows that somebody groks one important issue.
Sanders got the issues better than this, and the "unity" document did as well. This is a step back.
Today we get a look at the "agency review teams," and the education team is...well, not encouraging.
We already knew that Linda Darling-Hammond, loved by some and mistrusted by others, is heading it up. Here's some of the mix-- folks from the Education Trust, Learning Policy Institute, Alliance for Excellent Education, Teach Plus, and the Century Foundation. Ruthanne Buck, a senior advisor at the department with Duncan and King is here. She's also an old AFT hand, which I note only because there are three AFT staffers in the group; just one from NEA. There's some overlap, too-- Ary Amerikaner is VP of the Education Trust and former Obama USED staffer. The Teach Plus rep is CEO Roberto Rodriguez, another Obama alum (his bio says "From 2009 to 2017, he developed and led President Obama’s education initiatives to build systemic change and improve opportunity and outcomes across the educational continuum.")
If you have been holding your breath, waiting and worrying about whether or not Biden is going to take us back to the days of education under Obama--well, there's not a lot here to set your mind at ease. It is probably best to hold judgment and wait to see what they come up with, who the new secretary will be, what actual policies are going to be supported by the new administration. This week's news is just another reminder that just because Betsy DeVos is on her way out doesn't mean public ed supporters can stop being vigilant. For what it's worth, these people are volunteering to do a difficult job that is even more difficult than usual given the mess being created by President Hissy Fit, and for that, they do deserve some thanks. And it's hugely unlikely that we won't end up in a better place than we are now. In the meantime, you can choose to be either disappointed or hopeful, depending on how you're inclined. Whatever your inclination, keep both eyes open.
Posted by Peter Greene at Tuesday, November 10, 2020