Betsy DeVos Will Be Leaving. Prepare To Curb Your Enthusiasm.

It has been a few hours since the race was finally called, and now, once we get past a few hundred petulant lawsuits, the Trump Train will be leaving DC (undoubtedly kicking over every table it can find on the way out).

That means that Betsy DeVos will be leaving the department of education, and that is unquestionably, undeniably a good thing. And if you want to celebrate it for the rest of the weekend, I don't want to take that away from you--just put a pin in this post and come back to it Monday.

Feel better? I certainly do. Now then... 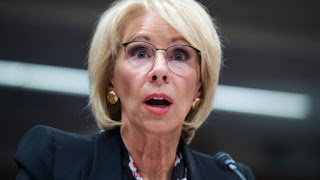 DeVos is almost certainly not going away. She has devoted her entire adult life to the pursuit of privatized, Christianized education, to a system that aids the Betters and keeps the Lessers in their proper place, to a world in which the wealthy can hold onto their well-deserved piles of money without having to use any of it to pay for nice things for Those People. She is not going to stop now.

She is far more experienced and suited to the life of a billionaire political operative than that of a government bureaucrat. That is what she knows how to do (hell, Secretary of Education is the only actual job she's ever had). In some ways, she did more damage as a private citizen then a government functionary. Ask any education advocate from Michigan--the DeVos family has mastered the art of checkbook advocacy, of backing politicians who will do their bidding and threatening those that won't. In fact, the DeVos family never stopped--they raised money for John James, even though he ultimately lost.

That loss (and a few others) may signal how things have changed for DeVos. For much of her career, she was able to operate somewhat stealthily. She now has spectacular name recognition--and it's not very good recognition at that. "This candidate is back by Betsy DeVos," is likely to be an albatross around the neck of any future politicians willing to answer her call. She has attained a huge level of unpopularity among the general public, and teachers at one point reported they dislike her more than they disliked Trump (sadly, plenty of teachers once again voted for Beloved Leader).

But if you think DeVos's departure from office means you've heard the last of her--well, no. She's only in her early sixties, she's wealthy, and she is a righteous True Believer. I know some folks think her stint at USED was about power and money, but I don't believe it. She wants to transform the world into the one that she believes it should be, having gotten her marching orders from GodJesus himself. I believe she has always been absolutely sincere about wanting to do away with her job.

What Biden gives us in her place is another conversation that we'll have for the next many weeks. I'm not encouraged that DFER has some "helpful suggestions," and I'm not excited about some of the company he keeps. So we'll just see. That could be awesome, or go horribly wrong. We'll see.

But do not take everything you've learned about DeVos in the past three years and just toss it away because you think you'll never have to deal with her again. The right wing school choice crowd has been clearing ground for a path to privatized Voucherland Christianist schooling; it runs right through the Supreme Court, and the election of Joe Biden doesn't change any of that a bit. What changes now is that Betsy DeVos is one more private citizen who can help bankroll and coordinate further attacks on public education in this country. And she still has a few weeks to set fire to the offices before she leaves.

That will be partially balanced by some new heft in certain quarters, because for some like-minded folks the allure of the title just never entirely wears off (I'd say that was ridiculous, but here we all are still hearing Arne Duncan offer pearls of wisdom years after he slunk out of the office). In some places, folks think she's done awesome work (looking at you, Florida politics man).

Four years ago most public ed supporters only kind of knew who DeVos was. Some didn't know her at all. Now we all know her a bit too well. I recommend that we keep that knowledge handy and stay alert in the years ahead.

In the meantime, enjoy this moment.