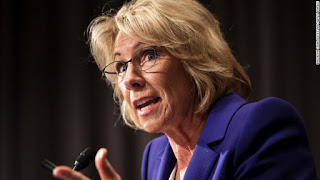 When floated in 2019, the idea was obviously not about kind thoughts about teachers or even philosophical consistency for the choice-loving secretary. It was a way to chop Title II out of the budget. It's a funny thing, but the words "choice" and "freedom" often end up meaning "We are going to spend way less money on this and just let you find your own way." But it looks as if the department  has found a way to move ahead.

Still, she's not wrong about one thing:

I've spoken with hundreds of teachers as I've traveled across the country and hosted teacher roundtables at the department, and I heard far too often how limited most teachers are in their own professional development. They have little to no say in the courses they take. They have very little freedom to explore subject areas that interest them.

Okay, the "spoken with hundreds of teachers" seems unlikely, but the "teacher PD mostly sucks" part won't get you an argument in most faculty lunch rooms. Particularly since the days that PD became welded to standards and Things That Will Raise Test Scores, leaving teachers of non-tested subjects twisting in the wind on every PD day.

So why not give teachers vouchers and let them shop for PD that they care about, are interested in, might even find useful? Here are the problems with such a system.

How big a voucher? Nobody knows at this point, but the current version of the idea involves waaayyyyyyyyyy less money than Title II-- like $200 million to cover all the teachers in the US, which would amount to about $40 per teacher if we tried to hit every Pre-K through 12 teacher. The department is apparently making noises about some sort of PD competition; I'm not even sure how that would work.

Bottom line is that districts now save money by buying PD in bulk. Teacher PDS vouchers would either require teachers to bundle themselves to cover costs, PD vendors to come up with clever ays to make more money from poorer customers, or the government to just spend more on teacher PD.

When DeVos was talking to all those teachers, I'll bet very few also said, "I need one more time-sucking non-teaching task to eat up my time." But PD vouchers would require teachers to sit down and plow through the various catalogs and directories and advertising fliers shoved in some corner of their desk, looking for something to spend their voucher on. Yes, this will be one more fun task on which to spend their copious free time.

Read this account from a teacher who went through a similar program. It seemed like a cool idea at first glance, but shopping crushed much of the staff.

The PD That Teachers Actually Want

Ed Week quotes Stephanie Hirsch, former big cheese at Learning Forward. Teachers, she observes, "are not asking for a PD voucher program—they’re asking for time for collaborative learning and problem-solving with their colleagues."

A lot of the best PD is produced in-house, colleague to colleague. How would vouchers factor into that? Would teachers be able to go ahead and set up in-house PD and use the vouchers for pizza?

And speaking of "could teachers" questions, who is going to manage the PD approval process that has to go along with this. Pennsylvania has a system in place for certifying that an even counts for PD hours, but would that satisfy the feds? If the end result of this system is "you must select your PD from the federally-approved list of vendors," it is not going to be much better than the current system.

The department says they want to fix the current "scattershot" approach to PD. This proposal would seem to do the opposite of fixing that.

Giving teachers control of their own PD, as if they were actual grown smart professionals, is a great idea. This doesn't seem like the best way to do it.