CT: Another Way To Privatize Education

To read press accounts, one must conclude that Ray and Barbara Dalio are not exactly like other billionaire dabblers in education.

He is a successful hedge fund manager and the richest guy in Connecticut. She immigrated from Spain fifty-ish years ago and worked at the Whitney before settling into the mom-and-kids track. He has announced that capitalism is  not working, and that income gap is a huge national crisis. When she decided she was interested in working on education, she started visiting actual schools. After a start working with charters and Teach for America, she pulled away and started supporting public schools instead through her philanthropies and organizations like Connecticut RISE. Teachers, even union presidents, describe her as humble, a good listener, "truly a partner." 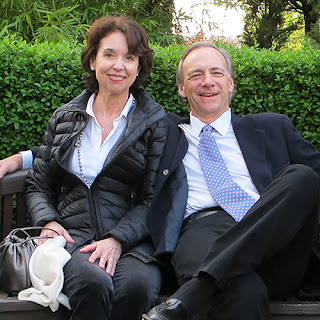 And yet, in some respects, they are exactly like other members of the wealthy philanthropist club. Ray Dalio thinks that the solution to dysfunctional capitalism and the wealth gap is that there "need to be powerful forces from the top of the country to proclaim the income/wealth/opportunity gap to be a national emergency and take on responsibility for reengineering the system so that it works better." In other words, the same old "empower a visionary CEO" model.

After giving some money here and some money there to public education in Connecticut, the Dalios decided last spring to up the ante, and offered $100 million to the public ed system. The money, they said, will be matched by the state and other philanthropists and "will be used to benefit students in under-resourced communities with a specific focus on communities where there is both a high poverty rate and a high concentration of young people who are showing signs of disengagement or disconnection from high school." The state teacher union president said, "I usually hate public-private partnerships, but this one looks okee dokee."

It seems swell, and yet.

As the New Haven Independent argued, Dalio, whose company Bridgewater Associates has been the recipient of state largesse, was simply returning public money to the public. CT RISE was itself one more example of philanthropic enthusiasm and money misspent.

And it turned out there were conditions. Big conditions, like the panel overseeing this giant pile of money would be exempt from ethics and disclosure rules. The GOP House Minority leader had a reaction that is too good not to share:

"These corporate board-holders are going to go up to the balcony and sprinkle down dollars on, I guess, the peasants of Connecticut, and we’re supposed to be happy about that?” said Deputy House Minority Leader Vincent J. Candelora, R-North Branford.

But that was in June. Last week it became clear that there would be no balcony, and no windows either. The group, now christened the Partnership for Connecticut, met behind closed doors, locking out the public, the press, and five legislators who would have been bound by the Freedom of Information Act.

The Connecticut Mirror was quick to point out an irony-- that Ray Dalio claimed that one secret of his success was "radical transparency." That came on top of more irony; after meeting behind closed doors (with a taped-over window), chair Erik Clemons announced, "In the spirt of transparency, we had a really great discussion on transparency."

The Dalio foundation does hav a representative on the board as an "advisor," because of course te Dalios want to know how their $100 million is spent. Apparently Connecticut taxpayers aren't so lucky, even if they are putting up their own $100 million for the enterprise.

This is the same old privatization baloney. Because privatization isn't just about getting public money into private pockets; it's about taking control. It's about saying, "Let's you and I partner up, but only if we operate according to my rules and not yours." Let's go in together on buying a car-- we'll each put up half the money, but only I can drive and the car stays in my garage and you don't get to know what I'm doing with it when you're riding in it. That sounds like an equal partnership, right?

Modern philanthropists seem really fuzzy on the meaning of "gift." If I present you with a gift, I don't get to control what you do with it or how you use it. If I give it to you, but I still get to act as if it's mine, that's not a gift. It's barely even a loan.

It's even less than a loan because in the case of these public-private "partnerships," the philanthropists  don't just not-really-give something-- they also get something from the public side, which is the legitimacy and power of government. Dalio gets to have the governor and the rest of state government backing his play, and he still gets to play by his rules-- with public money. The argument over how transparent the proceedings need to be is already raging (open up everything, or just votes), though of course there would be no such argument if we were talking about any government agency busy spending taxpayer dollars. It is the same old story-- democracy and all of its processes are just so damned inconvenient. The goals here may be noble and well-intentioned, but this is still how we replace a republic with an oligarchy, and I'm not excited about that, not even if the oligarchs are nice people and we call it a public-private partnership