If you live in western Pennsylvania, you may already know the story of Ashley Kuzma. If you don't, I'd like to share it with you.

Kuzma was born in Beaver County, PA, and graduated from Freedom Area High School in 2005. She attended Pitt where she earned a Bachelor's in History and Poli Sci, and Edinboro University, where she earned a Master's in Education and a teaching certificate. She worked as a long term sub teaching social studies, then later became a gifted support teacher for Lancaster schools, then taught gifted at McDowell Intermediate High School. 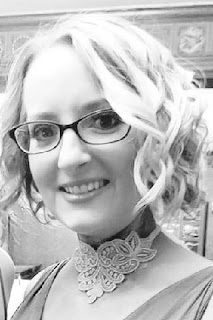 Teaching was a challenge as she suffered from throat problems that made her increasingly hoarse. A biopsy revealed those problems to be the result of laryngeal cancer. She went through radiation treatments, then a partial laryngectomy. She returned for the final day of school with a feeding tube. Then the cancer came back. In September  of 2018, she went into the Cleveland Clinic for a total laryngectomy, plus 30 radiation and 5 chemotherapy treatments. She returned to the classroom, able to speak softly with the aid of a prosthesis held against a permanent opening in her neck. As a young teacher, she did not have nearly enough sick days accumulated to cover her absences, so much of her treatment occurred during unpaid leave.

Her story became more widely known when a friend entered her in a Norwegian Cruise Lines contest that offered free cruises for 30 teachers who showed a passion for teaching. Kuzma was one of the winners.

Before it was time to leave for the cruise, Kuzma learned that her cancer was back. She traveled to Mexico and Chichen Itza. Her treatment options were limited.

Before she passed away, Kuzma completed one other exceptional act. She wrote her own obituary. Here are some excerpts:

When you have recurrent laryngeal cancer that just won't take no for an answer, you have a lot of time to think about death. The good thing is I no longer have to worry about saving for retirement, paying off student loans, or trying not to get skin cancer??? One positive outcome from having recurrent cancer was that it taught me to let go of the insignificant things and to just enjoy the people and places. After three recurrences, my body finally had enough and I passed away on Sunday, September 22, 2019 at the Cleveland Clinic.

I am extremely grateful for the life that I lived. I was fortunate to have a loving family, supportive friends, a stable and meaningful job, and a house to call my own. My wish for you is to stop letting insignificant situations stress you out. Do what is important to you. Relax and enjoy the company of those around you. What do you value in your life? In the end, that's what matters.

This obituary was written by Ashley preceding her passing as part of the many preparations to make the transition easier on her family.

There's not much to add. I am reminded of my old friend Susie who, during her rounds of chemo, would step outside between classes, lean against the building, throw up, and then go back to work. I am reminded of Jim, who kept showing up to teach his classes until the doctors made him stop. There is nothing good to say about people who die young. It's just a reminder that as long as we're alive, we have work to do-- but we won't be alive forever. Don't sweat the insignificant things. Know what matters; let the rest go.