The Fake Furry Story That Will Not Die

There it was again, this time on my facebook feed, One of my friends had shared someone else's post, a four-picture collage of a teen girl wearing some ears and makeup, costumed to look catlike. Could have been a Halloween shoot or just a dress-up photo, but of course it was accompanied about pearl-clutching text about how some school was allowing some girl to attend school self-identifying as a cat, and What Are We Coming To These Days.
"Not true," I responded with some context. "I guess," others replied, "But still..." while others responded with various mixtures of horror, derision and outrage.
It's the lie that will not die, and it should be laughable, but it tells us something about the far right bubble and how quickly it can spread baloney even as it remains impervious to actual facts. 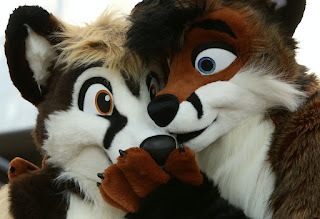 Folks started noting the spread of furry panic back at the beginning of this year. There are schools, the story goes, that allow students to self-identify as animals, wear their furry costumes, eat sitting on the floor, do their business in litter boxes. So far there has not been a single factual foundation for any of these stories. Nor, for that matter, do the stories get it right when it comes to Furry culture and behavior  (furries do not, for instance, wear their outfits to work and insist on acting as animals or pooping by their desks). But it doesn't matter.
In Colorado, the GOP candidate for governor has tripled down on the claim that students are self-identifying as animals throughout the Denver with the support of their school districts, despite repeated debunking and denials.
Minnesota also has a GOP gubernatorial candidate who repeated the litter box claim, despite debunking.
In Tennessee, school leaders had to take time to respond to a litter box claim by a state senator.
South Carolina districts felt the need to respond to litter box stories. In Wyoming, parents told a board they were worried that furries were covered in equality policies. And Rhode Island. And Pennsylvania. And New York. And Illinois. And Oregon. Oh, and Marjorie Taylor Greene, too.
And so far we're just talking about stories in the last month (h/t @KyleClark).
If we go back over the last year, we find more. In Nebraska, in a rare apology, a state senator had to admit that the furry rumor he had repeated was baloney in March. In Texas, a GOP house candidate went with the relatively milder "lowered tables" story in January. A South Dakota school district had to explain to a parent in July that no, they would not be putting in litter boxes for furry students. Maine was battling back the litter box rumors in May. In April, a Wisconsin school district had to explain that they have no "furry protocol."
Patient Zero for this fake story seems to be Michigan's Midland Public Schools board meeting in December of 2021, at which a mother spoke claiming she was informed that litter boxes had been added in bathrooms for students who "identify as cats", calling it a "nationwide" issue and pointing to an "agenda that is being pushed" (a "nefarious" one). The co-chair of the Michigan GOP promoted the stories ("Parent heroes will TAKE BACK our schools), and before you could say crazy-pants disinformation campaign, the story was being covered by Buzzfeed, USA Today, and the New York Times.
Since this post went up, several readers have pointed out that the story also traces origins back to the post-Columbine practice of keeping an emergency bucket in classrooms in case of an armed siege--including kitty litter for the trapped students.
And you can find all this coverage and more quickly and easily by just going to the Wikipedia page about this whole loonie story.
Regrettably, almost none of the coverage asks obvious questions. Like, do furries self-identify as animals? And do furries use litter boxes? The answer is no to both. Furries are best understood as animal cosplay, and like your neighbor who dresses up as Captain Kirk or Wolverine or a Rennaissance Faire sword-bearing barbarian, they know who they are in "real life" nor do they wear their costumes to work.
But the "identify as" that folks use when they spread the stories is a tell-- furry panic is a barely-masked version of LGBTQ+ panic, cut from the same cloth as the old "If we let the gays get married today, will people be marrying their dogs tomorrow."
Furry panic highlights several features of the current landscape. It is ready-made for the parents' rights movement, which is in turn ready-made for the current election cycle. It also dovetails nicely with the drive to reduce trust in public schools so that they can be dismantled and replaced with a privatized system. It's a story that serves too many peoples' purposes to be allowed to die.
And it reminds us of the societal cost of destroying trust in everything outside a particular propaganda bubble. Because these stories should absolutely have stopped by now. The repeated denials by school officials of every stripe should have mattered. The fact that after almost a year, nobody can point to an actual incident should matter. There's one story about a kid who got in trouble for barking at a teacher, and someone on my Twitter feed says a student told him that kids at school get away with wearing horns and a tail, and that's all a far cry from allowing students to identify as animals and use litter boxes at school.
But we are once again in the land where facts don't matter--or, rather, only information that comes from people in the bubble can be treated as a fact. Objective reality is not a thing; only my far-right rumors and outrage source can be trusted. Ironically, it's likely that actual furries probably have a better grip on reality than some of the people who are indulging in this groundless panic.
Furry panic is also a reminder of the power of repetition. Repeat a lie often enough, and it becomes that thing that you heard somewhere and hey, if I keep hearing it--well, where there's smoke, there's fire right? This is one of the best tricks of the far-right outrage complex--just keep bouncing the same picture of smoke around and around and eventually folks believe that there's a fire, when there isn't even really smoke. That's why the "mirrors' in "smoke and mirrors" matter. The notion of "I'm correct, so if I just explain it once, clearly, that should be enough to make it stick," is sweet, but not an excellent plan.
Posted by Peter Greene at Tuesday, October 04, 2022
Email ThisBlogThis!Share to TwitterShare to FacebookShare to Pinterest