Not Politics In The Classroom

Distance learning seems to have pumped new life into the debate about politics in the classroom. From parents freaking out over a Black Lives Matter poster, to simple declarations that teachers should never, ever talk politics, to the Pesident's adoption of the call for more patriotic education, we're back to arguing about how much political content should make it into a classroom.

I actually agree that a teacher's politics don't belong in the classroom. But there' a reason that maintaining the wall has become more difficult, and I'm pretty sure I don't mean the same thing that some critics mean.  But I have another way to sort this out--I'll get there eventually.

The problem is bigger because of the politization of everything

One of the extremes represented by the current administration is the extension of a personal political brand. This kind of bundling is not new--if you were a Prohibitionist, there was a whole batch of political positions having nothing to do with alcohol that you were expected to support. But Trump has taken this over the top, from the very beginning of his term when he established that counting people in a photograph was a political statement. 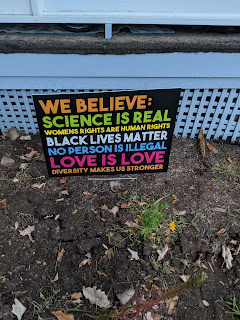 That has simply accelerated. If you say that climate science is real, that Black lives matter, that California is a lovely state, that Mexicans are not all racists, that racism is part of US history, that mocking disabled people is wrong, that Nazis are always bad, and any number of other comments, you have taken a partisan political stand. Trump has staked his claim to so many positions that it's hard to have a position on anything at all and not be taking a side for or against the President. Again, this is not new--once upon a time, it was partisan politics to say that ketchup is not a vegetable. But it's as bad now as it has ever been, and needlessly extended to a number of piddly issues.

For some subjects, this is an extension of an old minefield. I taught US literature for decades, which meant that I had to discuss race, religion and gender issues every week. All of those are more politically fraught now than they were thirty years ago. My position was always, explicitly, "I am not here to tell you whether these folks were right or wrong, but to show you as clearly as I can how they saw the world and their place in it." But the very notion that somebody can hold a particular point of view for reasons other than being stupid and/or evil--well, that's also politicized now. You can't just disagree with the President--you must, apparently, hate him.

How to build student understanding of the world without showing students different ways to see that world? That is increasingly the challenge.

YMMV, but this is where I draw lines in my own head.

Values are one thing, and politics are something else. What you think matters, what your map of the world looks like--that's not politics. The solutions to issues created by governments and laws, the lines that you draw to create boundaries on your map--that's politics. (I like, also, P. J. O'Rourke's definition--Politics is the business of getting power and privilege without possessing merit.)

That applies in both present and past tense. Whether Columbus was a wretched disaster vector or a noble-ish explorer is not a political question; it only becomes a politics-flavored question when you try to attach it to the question of what the government ought to be doing right now.

But we often try to "reduce" things to politics as a way of diminishing them, of saying this is not about facts or honesty or a better understanding of the world--it's just about politics.

Hence the bitching and moaning about Black Lives Matter and the 1619 Project. Look, there is nothing remotely political about saying that Black human beings have a right to life. It is not a political statement. Some folks have tried to engage with good faith arguments with people who dismiss BLM by way of many fine metaphors (Imagine you've been sitting at the dining room table and getting nothing to eat. Imagine that your mother just announced she has cancer) but for some BLM opponents, that's not the point. They believe, essentially, that Black people used to have it rough, but at some point (maybe the Civil War, maybe the 1960s) we fixed all that and right now, Black people don't have it any worse than anyone else. This BLM stuff, they are pretty sure, is just a ploy, a piece of political theater intended to leverage the government into favoring a particular group. The 1619 Project is not a legitimate attempt to put forward another perspective on history, but simply an attempt to create pressure on the government, a political project.

"All of this clarifies nothing," I hear you saying. So let me try to boil it down to specific classroom practices.

No points for agreement

My class involved lots of writing about controversial subjects, and discussions to help flesh out the ideas. My job was to argue any and all sides to add fuel to the fire. Invariably my students would ask me what I really thought, and I always refused to tell them, because for a writing and discussion class, it was critical that they knew that all viewpoints were fair game. I learned in my first year or two that if you tell students what you think about the topic, you'll get a stack of essays that agree with you.

It's impossible to pretend that we are some sort of blank slate of belief. Classroom rules ("everyone in this classroom will be treated with respect") are infused with our beliefs.

As the year progressed and we built a level of trust, I would become more transparent about my beliefs. Teachers are among the few adults that students encounter in life, so it is important to model adult human behavior, including How To Believe Something Without Being a Giant Asshat About It. That includes giving students the safety to express opinions that you think are wildly wrong (and boy was I tested on that in some moments). That includes demonstrating disagreement on an issue without sending the message, "You are a jerk and a fool and Less Than because you believe that" (again, lots of testing). That doesn't mean pretending that you could conceivably agree with that damn fool thing that just came out of their mouth or pen, but once you've built trust, you can push back. "Find me some evidence" is your friend here.

Two things I held onto here. One is that it's hard to make a good argument and write a good essay in support of terrible ideas. The other is that humans, particularly young humans, learn and grow, and they do it best when they have the ability to examine their own thoughts and ideas rather than building a fortress around them to protect them from perceived attack.

But how do you decide what becomes explicit in your teaching. I have that poster at home--would I have put it up in my classroom?

Where I draw the line

For me, it goes back to a safe and accepting classroom environment.

If I put up a KKK poster or a Confederate flag or legalized abortion is murder poster or argue against some legislation that has been labeled part of the gay agenda (whatever the hell that is) in my classroom, I'm going to send a message to some students that they are not welcome there. That's bad practice. It guarantees that some students will feel threatened, that they will know they should never write an honest essay for me. It will mean that they get the message from an official representative of the Adult World that they are unwelcome, Less Than. That is not okay.

Likewise, a poster for a political candidate signals that the classroom has been claimed by one particular team, and members of other teams are not welcome.

Does a Black Lives Matter sign, or a Love Is Love banner, have a similar exclusionary effect? I suppose a student who doesn't like gay or Black folks could argue that it is, but there's a big difference between "You aren't welcome here" and "I don't want to be around Those People." In one you are being excluded, even threatened, against your will, while in the other case you've made choice about who not to accept. Deciding you don't want to be included is different from being told you won't be included.

The line for me is anything that makes the classroom feel unsafe or unwelcoming for a student. We can handle disagreement and controversy. But it is never okay to send the message, "Because of who you are, you are not welcome here. You are not okay." Not from student to student and certainly not from teacher to student. And if you believe that an inclusive message interferes with your need to treat other people as Less Than, well, you may want to search out a private alternative to public school (just don't ask the people that you want to treat that way to help pay your tuition).