Has Miami-Dade Really Found The Secret Of Cheap Excellence?

From school choice to school finance, Florida is the state education disruptors love to point at, though they tend to point verrrrry carefully at very specific features of the Floridian education landscape. For instance, here's Michael Q. McShane at Education Next running a piece about how Miami-Dade schools have "bucked the staffing surge trend" while still maintaining "student achievement." His thesis is right up front:

The Miami-Dade County Public Schools spends less per student than the only three larger districts in the country and still manages to deliver top-tier student achievement results.

The implication, popular with the conservative wing of reformsters, is that educational excellence is available for bargain prices if we just worked the right levers. But there are three large holes in his Florida argument. 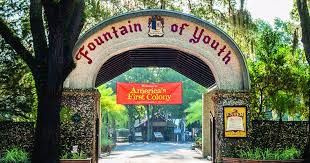 About that staffing surge...

McShane starts by pointing out that Miami educates around 350,000 students, and according to the census folks, they do it for less than $10K a year, far less than other huge districts, even when adjusted for cost of living. This has not a surprise; Florida schools have been trying to shake off the "latest" budget cuts for years (here they are in 2011, and here they are this year). Florida is run by politicians who are openly hostile to public education, and they've been trying to bleed the system dry for years.

But Miami-Dade, says McShane, is doing it "partly" by providing low-cost education by pushing back against the "staffing surge."

Except here's the thing about the staffing surge. Bring it up on Twitter and Bruce Baker (School Finance 101), a Rutgers University professor specializing in school finance and education policy, may well bring up this chart: 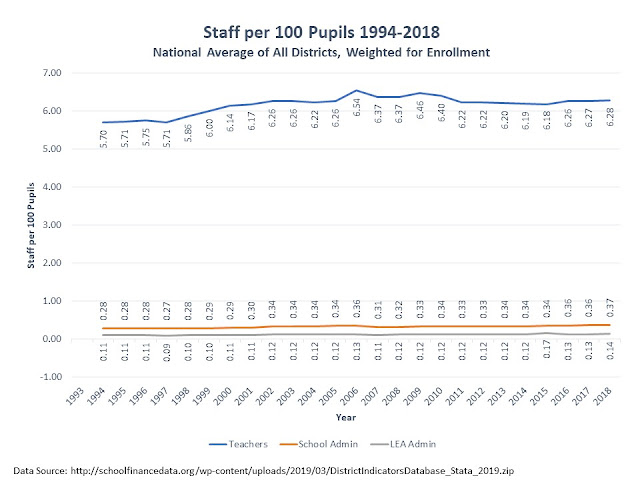 The staff surge is not very surgey. Now, that is a national average, so some parts of the country could be feeling some surge, I suppose. McShane is using numbers from Ben Scafidi of Kennesaw State University, but he seems to have focused on how much student and staff populations grew or shrank by percentage. By his measure, Miami-Dade is unusual in showing a percentage of growth equal to the percentage growth of student population.

Now, I'm not an education scholar, but I know this about percentages. If I have a thousand students in school, and next year I get 100 more, my student population has grown by 10%. But If I had two administrators and I hired two more, my administration staff has increased by 100%. Since student populations, particularly in a huge district like Miami-Dade, are way larger than teacher or administrator populations, comparing their growth or shrinkage by percentages is an apples-to-watermelons situation. I'm confident Baker's method of measuring is more useful, and that the "staff surge" issue is not that big a thing.

I'm a broken record on this point, but I am just going to stay in my groove until folks examining education start singing a different song. When McShane says "student achievement," he means "student test scores."

Just do me a favor and keep repeating that infinity times.

But even if we decide we care about test scores...

McShane wants to point at NAEP scores-- well, the Trial Urban District Assessment NAEP scores. But he only wants to point at very particular NAEP scores. Miami 4th grade reading and math scores outperformed  the large-city average for the test. The 8th grade scores were...meh. On par with other large cities. There is also such a thing as regular old NAEP scores and, in some years,12th grade NAEP scores, but McShane doesn't bring any of that up. Can you guess why?

Billy Townsend knows, and he lays out all the gory details in a blog post here. The short answer is that by the time Florida students are finishing their education and ready to go out into the world, all of that 4th grade test-based awesomeness has vanished. Not only vanished, but cratered as Florida's students fall behind the nation as a whole.

Stanford did a study looking at growth, and Kevin Drum, a political writer for Mother Jones took a look at the results, mapping out districts based on how much students advanced in a year between 3rd and 8th grade. 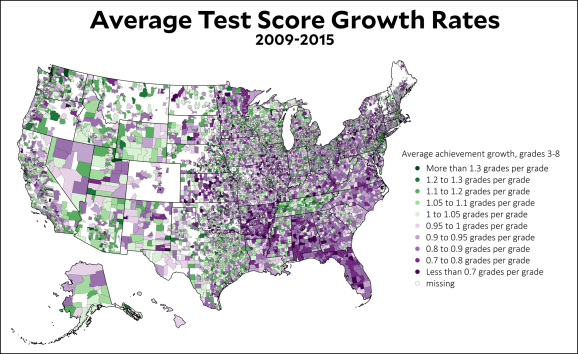 You know I'm not a fan of these kinds of test-based statistical shenanigans, but if that's the game these folks want to play, let's take a look. In the map above purple marks the districts with the very least growth between 3rd and 8th grade. As Drum concludes, based on these results, "Florida is an almost insane basket case."

So if they've been drilling testing into students since the students were five years old, why don't they test well as eighth graders? That is a question that answers itself, although I might add, have you met an eighth grader? Florida wants to be a proof of concept state for many things, but one thing it is absolutely proof of concept for is that focusing your entire education system on test taking leads to lousy educating.

So in the end, we have to conclude that along with the fountain of youth and land deals that can make you rich, cheap educational excellence is another thing that cannot be found in Florida.