At the beginning of the week I made the drive to Lansing, Michigan (shorter trip than flying, and I like a good drive) at the invitation of a member of the State Board of Education at their meeting on the subject of competency based education. I'll try to distill what I told them for this space at some point; in the meantime, there's video out there somewhere.

I'd never been to Lansing before, never addressed a state board of education before. It was an adventure, and there were a few lessons to be gleaned from the trip. In no particular order: 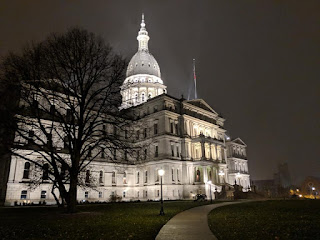 While many state capitals favor a sort of neo-classical architecture, Lansing's main government building mall feels a lot like Soviet Bloc circa 1964. Their capitol building has a dome, but to my eyes it's weirdly elongated, like someone squeezed a photo while editing it. I'm sure the fact that it was mid-November and starting to snow didn't help.

Much notice has been paid to how Trump's election goobered up the left-right coalition of reformsters. The resistance to reform has also long been an alliance of left and right folks, whose concerns and goals have not always perfectly aligned. I was invited down there by a GOP board member who is allied with some activists on the right end of the spectrum, after being recommended to him by someone also on the right in the world of the resistance. I don't think I'm particularly far left, but I'm far left of these folks. And during the lunch break, I was invited to dine (okay-- grab something in the cafeteria) with my host and two of his Democratic colleagues.

I suspect (as do they) that when it's time to give focus to what they want to see rather than what they don't, they will find some things they disagree about, but at the moment they are allies. More importantly, they are able to talk to each other respectfully and with the assumption of good intent. 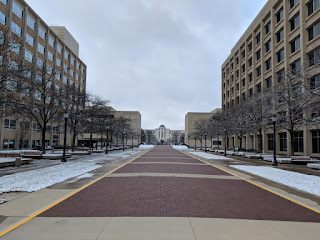 Not the first time I'd heard of this one, but the game has been played, again, in Michigan.

Why is there now a conversation about CBE going on in Michigan? Because rather than talk about proposing it publicly or tossing it around in the appropriate committees with appropriate public discussion, legislators snuck it into the budget. This is a cool old trick. Let's say you want to support plastic widgets in your state, but you don't want to bring it up publicly because plastic widgets are controversial. Just add to the budget a $100 million grant item to foster the development of the plastic widget industry. Nobody has to talk about it, and if you do a really good job nobody will even notice it's there except the plastic widget industry folks. Michigan did that with CBE instead of plastic widgets.

The lesson here is always pay attention to the budgeting process in your state. Just because nobody announced a legislative plastic widget initiative doesn't mean there isn't one.

How The Bully Pulpit Works

As several members of the board noted, it's not that they haven't heard about CBE. They've heard plenty-- it's just all been happy talk about how wondrous it is. When a political chief, like a governor, decides to push a program, one of the levers they have is the ability to bombard key people with information of a certain flavor. I don't think I'd really thought about this a lot, but after my trip, my list of qualifications for elected office-- any elected office, no matter how minor, obscure or boring-- is the ability to study up on a subject and think for themselves. Honestly, I think I'm better with someone from the Other Side who can actually think like an independent grown-up than I am with someone from my own side who just follows along with whoever is next up the food chain. 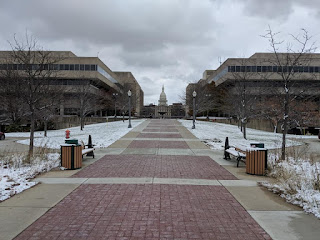 As you might imagine, it's still there. One of the board members is a DeVos BFF. She listened politely and then sweetly and passive aggressively put me in my place. It was kind of cute in a church lady kind of way.

This was a different thing for me. I'm used to taking my shots from behind a keyboard, or working in front of a self-selected-for-friendliness crowd, or working an audience of teens, or performing with either an instrument in my hand or my back to the audience. But if we're going to keep saying that teachers (active and retired) are education experts, then we should be prepared to stand up and speak our truth, without apologizing for it. Asking the opinion of an actual teacher is exactly what outfits like state boards of education should be doing, and lots of other groups, too. More of us should be putting ourselves out there, or pushing our colleagues who have the gift out there, and when the chance to speak comes, we need to take it. So I'm glad I did that.

Also, as far as Lansing goes, I am told there are very nice parts outside of the area in which I spent my 16 hours.
Posted by Peter Greene at Friday, November 16, 2018