Killing the Five Paragraph Essay: A Book About Writing

I'm happy to have sitting on my desk a fresh new copy of John Warner's Why They Can't Write: Killing the Five-Paragraph Essay and Other Necessities officially out next week. For anyone who teaches writing, or who just wants to understand how we entered this golden age of bad writing instruction, and who also wants to know how to escape it.

Warner is a regular blogger for Inside Higher Education, and he turns up in a variety of other settings as well as having spent a couple of decades teaching writing on the college level. He knows the territory. 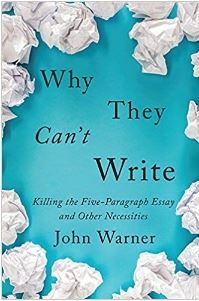 He's also heard the complaints about Kids These Days and how they can't write, and with the first few pages, he dispenses with the usual suspects (bunch of snowflakes with too many cell phones). So what's the answer?

The short answer is they write badly because we taught them to. The long answer takes up the first ten chapters of Warner's invaluable book.

We need to acknowledge first that we have always been complaining that students could not write, while also acknowledging that writing, unlike speaking, is a completely unnatural process that humans have to learn. Warner lays some important groundwork in talking about the writer's practice.

But the particularly valuable chapters are those that lay out the different influences that have created a perfect storm of bad writing instruction. Over those seven chapters, Warner helps clarify how these disparate yet interlocking forces brought us to this place. This sad, lumpy place.

Warner runs through seven problems. There's the problem of atmosphere, the way in which schools and a culture of pressure and competition can suck the fun out of learning. There is the problem of surveillance, the ways in which we monitor students closely, often choosing bad proxies in place of more authentic indicators (e.g. attention). The problem of assessment and standardization, the belief in the One Right Answer, which is the very opposite of good writing. The problem of education fads, like grit (here Warner includes a great breakdown of The Hype Cycle). The problem of technology hype-- no, the good writing assessment software that is always "almost here" still has not arrived. The problem of folklore, the received wisdom that is passed along with no evidence but age. And the problem of precarity, which speaks to the lack of stability in a teachers' life, including precarious pay and increasingly senseless and unpredictable means of evaluating the teachers' work.

You may not have thought of all of these as factors in the teaching of writing, but Warner makes a clear case for each. Then he talks about a better framework (my favorite chapter title here: "Making Writing Meaningful by Making Meaningful Writing") and wraps the book up with unanswered questions, those challenges that must be addressed.

This is a great book, clear and concise and accessible. It looks at the big picture of how we got to this place and how to get out of it, which is critical. Writing texts that focus simply on specific techniques and exercises invariably end up tinkering around the edges, because too many teachers are starting from a fundamentally flawed foundation. Not their fault-- it is a foundation that has been built and enforced by outside, non-teachery forces-- but before we can build a better structure, the foundation has to be addressed.

That is not to say that there aren't specific items from the "things you can use in your classroom next week" category, but the book is important for anyone who is interested in growing a world full of better writers, including people who aren't in the classroom. For more specific activities and exercises, I recommend Warner's The Writer's Practice, due in February of 2019.

This is a book we've needed for a while, and now that it's here I recommend you grab a copy.