This week, reporter Ann Doss Helms of the Charlotte Observer and Lynn Bonner of the News & Observer both offered accounts of a striking example of 'how the sausage is made" and how public officials make sure that the sausage carries a nice chartery taste.

Wednesday was the day to present the state department of public instruction's report on charter schools to the State Board of Education. They were supposed to accept the report on Thursday, but Lt. Governor Dan Forest had a problem. Per Bonner:

Lt. Gov. Dan Forest argued that the report, intended for the legislature and full of data on charter school enrollment, demographics and costs, was too negative.

“The report, to me, did not have a lot of positive things to say,” he said.

And just in case you're thinking maybe Forest is just concerned that charters aren't getting the job done and he wants to shape them up and that's what he's responding to...

Once the board issues reports, Forest said, “that is the fuel the media uses for the next year to criticize whatever we’re doing.”

And so Forest sent the report back to the drawing board, even though the deadline for acceptance of the report is January 15. Forest said that he would "run interference" with the legislature if anyone complained about the missed deadline. Helms offered her own analysis:

I was among the reporters present. The brief discussion struck me as an unusually blunt demand to make data more politically palatable.

Will you be surprised to learn that Forest is a big-time fan of the charter industry? His General Counsel and Policy Director, Steven Walker, who sits on NC's Charter School Advisory Board and was presented the Charter School Champion Award last summer from the Charter School Initiative of North Carolina.

What did Forest not like about the report? Well, as it turns out, since the report was submitted to a public meeting, a copy (what I guess we must now consider the rough draft) is online for the reading. Let's take a look! The report has three main sections, and I'm sure Forest is over-reacting. Surely this report will create a rosy picture of charter life in North Carolina!

Once the previous cap of 100 charters was removed back in 2011, the charter gold rush has been on, though more charter requests have been denied than approved. Currently there are 187 charters operating in NC.

The report notes that charters can draw from any geographic location, and while they are encouraged to reflect the racial and ethnic composition of their location, "There is no mechanism by which schools can guarantee racial and ethnic balance, however, nor is there an official consequence for not achieving it."

That might explain why charters in NC are more white and less Hispanic than public schools. Charters student populations are 57% white, compared to 49% for public schools. Public schools are 16% Hispanic, while charters are 8%. Black population is about the same. This statistic is problematic for all those charter fans who insist that charter opponents are trying to deny Black families a choice for a better life.

But the report digs beyond these raw statistics and finds that, well, things are actually worse. The report finds that individual charters are highly segregated, and that the trend over time has been for fewer and fewer non-white students to make it into charters. Public schools have remained a pretty evenly segregated mix over that same time. They refer here to a working paper by Helen Ladd, Charles Clotfelter and John Holbein of Duke University, tracking the growing "segmentation" of charters in NC. That paper is pretty striking read, and it provides this pair of charts to bluntly illustrate the problem: 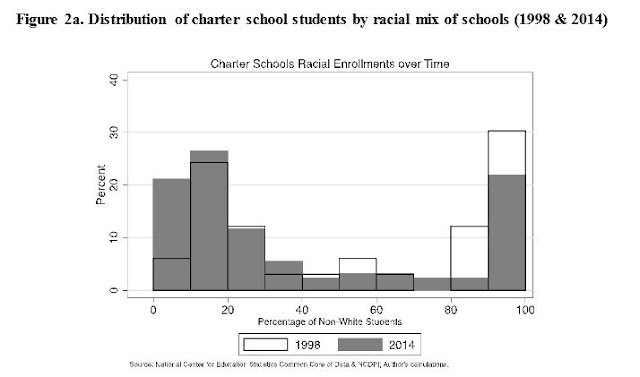 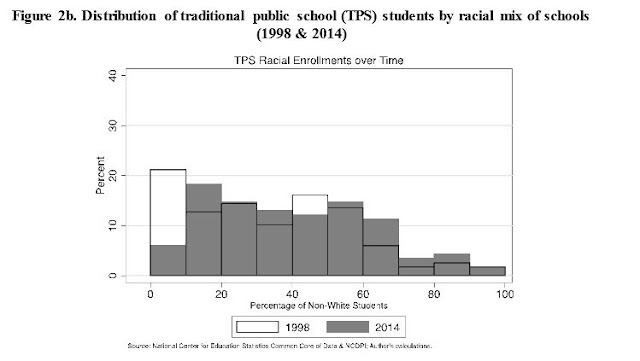 North Carolina charters have also consistently served fewer economically disadvantaged students. The numbers fluctuate over three years, but the ratio remains consistent-- public school Ed population has been at 50, 61, and 55 percent of student population. In charters, it has been 40, 37, and 36. And once again, it's worse than it looks, because that's an average, and looking closer reveals that a third of NC charters keep their ED student numbers below 20% (and half of those are below 10%).

The news about "exceptional children" is a little more complicated and nuanced, but for the most part, charters are on the same page as public schools.

How do these schools perform? North Carolina is one of those states that now gives its schools grades. The public school grades are distributed in a pretty bell-curvy manner, but charters are more spread out to the A/B and D/F end of the scale than public schools.

Charters do generally perform better than their home LEA, though about a third can't be compared to their home LEA. These data seem incomplete in many ways-- for instance, what about a comparison to the home LEA of the students, rather than that of the building. The data could mean that NC charters are producing amazing results, or that they are creaming top students, or students from more upscale neighborhoods are attending a charter in the poor part of town.

Inadequate charters? There are such things. When the cap was lifted, legislators also created a definition of a crappy charter that included low academic performance (aka "test scores"). In 2012, one charter ran afoul of this. For 2012-2013, the state moved the goalposts so that test results wouldn't count against charters. In 2014-2015, sixteen charters got warning letters for academic suckiness. They could be in trouble. Maybe.

Pre-cap-lifting, 57 charters closed, including 14 that never opened. 35 of those closures were because of financial problems. Since the cap was lifted, 13 charters have closed

Impact of Charter Schools on the Public School System

Charters currently pull $366 million in funding. The report notes that while in theory this is simply money redirected from public schools, since charters also pull in former home or private school students, they are actually adding to the state student population, and since the state doesn't increase school funding proportional to student numbers, this is actually a net loss. In other words, when Pat stops home-schooling or attending Lilywhite Private Academy, Pat's Regular Public High School loses money-- even though Pat never attended RPHS in the first place.

This is actually a financial wrinkle I've not seen brought up often. I'm doubting that charter supporters are happy to see it turn up in this state-level report.

The report brings up the issue of specific economic impact on specific districts-- and then notes that the state stopped asking local districts about this in 2013, because...:? Don't ask, don't tell? What you don't know can't hurt your charter PR?

And then the report actually tries to say some nice things about charters, like how competition might help (though all options aren't really available to all students) and parents might become more engaged as they try to figure out what's going on. No, really. When I first read the paragraph, it seemed sort of favorable to charters. But now-- damn you, close reading!

Oh, charter laboratories of education! What genius educational ideas have you brewed up in North Carolina? And, um, why is this part of the thirty-page report only two pages long?

Back in June of 2015, NC set up standards to rate a charter as "high quality." The standards involved academic, operational and financial domains. And of the 146 charters in operation last year, a whopping nine earned the high quality seal of approval. There's a list. Next year they're going to tweak the standards.

Well, how about EVAAS, NC's preferred junk science measure for effectiveness? Did any charters manage high EVAAS scores with high populations of economically disadvantaged students? There were eight, with two way out in front of everybody (Henderson Collegiate and Maureen Joy Charter). The report does not offer any clues to the secret of their success.

The remainder of the report is a compendium of updates and structures (here's some services the NC Department of Public Instruction offers charter folks, here's some of the pending legislation, and here's an update on some ongoing stuff, like North Carolina's pilot program to enter the wildly unsuccessful cyber-school business).

Good Luck on That Rewrite

So the department now has its marching orders from the Lt. Governor-- "Go make this thing less sad, and don't make charters look so much like a resegregate NC schools while draining taxpayer dollars."

Forest meanwhile felt some pressure to explain exactly what he meant by, "Go rewrite that report so it doesn't make me sad." In an interview with Pete Kaliner of WWNC, he indicated that he saw the negative view of charters as part of a pattern, that positive news was withheld on purpose.

In the interview Forest said he objects to the way the state report compares demographics and letter grades at charter and district schools. And he said a section that details increased state spending on charter schools and concludes that most of that money would otherwise have gone to school districts is “an opinion piece.”

And if the department is unsure about how they can "fix" the report, Forest knows where they can get help.

Forest said said there should be an opportunity for “charter schools themselves to be able to read it and look at it and go, ‘Wait a minute. This isn’t painting our picture.’ There’s a lot of great positive things going on with charter schools in the state. Let’s tell that story, too.”

Meanwhile, since the original draft is right there on line, we'll be able to compare the final product to see exactly how many coats of whitewash have been applied to the big charter barn. Let's hope they do a good job, because facts and the truth are nice and all, but not when they come at the expense of good charter PR. Carry on, North Carolina.
Posted by Peter Greene at Sunday, January 10, 2016