Last week the Economic Policy Institute popped out an article attached to this graphic: 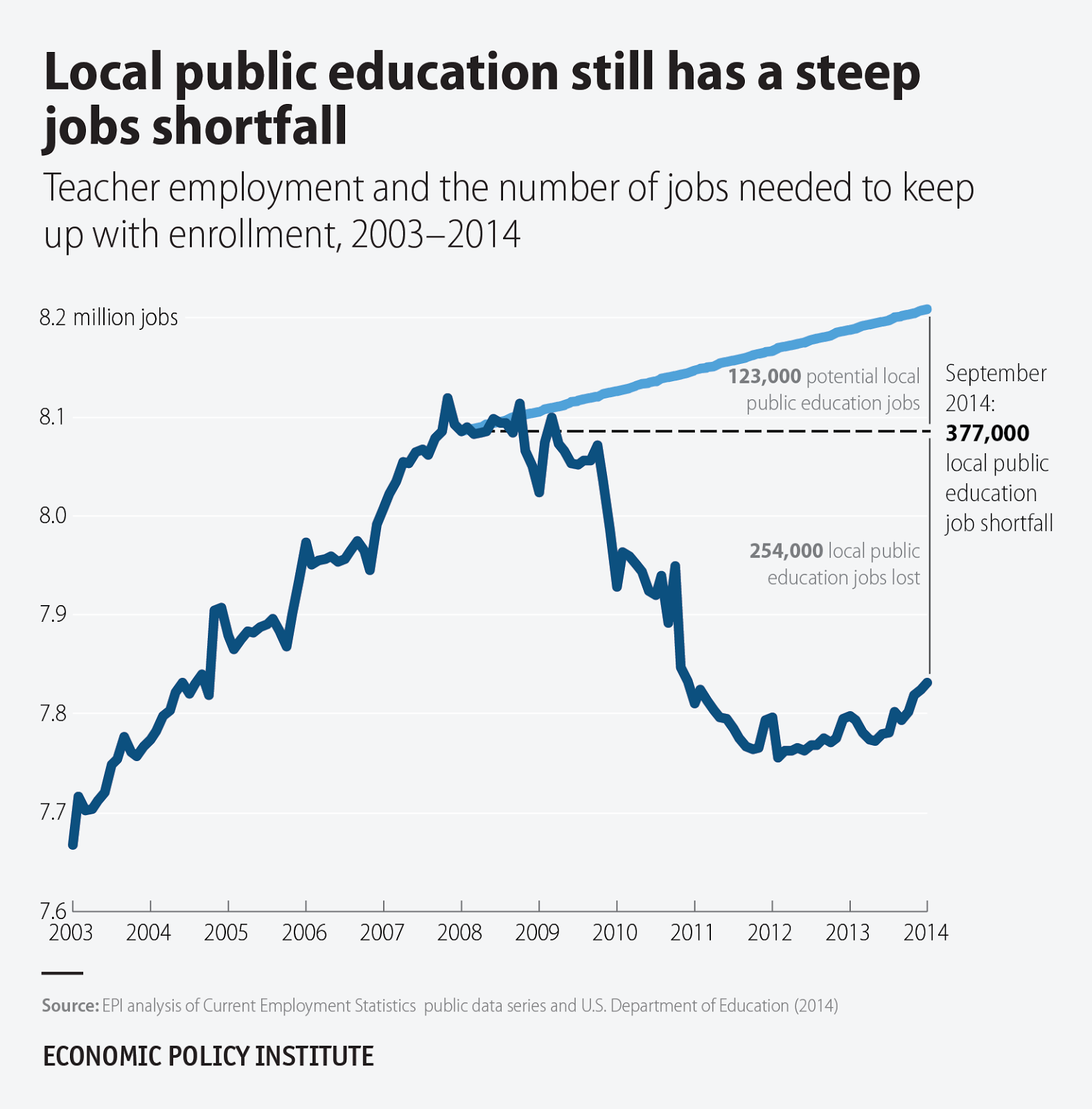 Their headline was the dramatic shortfall of jobs in public ed, particularly when compared to their projection of the number of jobs needed to keep up with enrollment.

I have a number of questions raised by the graph.

Does this reflect a shift to private employers? How many public school jobs are being shifted to private and charter schools? We know about the dramatic shifts of this nature occurring in places like New Orleans and Cleveland, where pubic schools have been shut down so that they can be replaced with charters. But is that process occurring in smaller ways throughout the country-- Bogwump High School cuts three teachers, but Bogwump Corporate Charter opens with a six teacher staff. And that raises its own second question-- is the EPI accepting the fiction that charter schools are public schools, or is it correctly counting charter teaching jobs as non public school jobs.

Public education added 400,000 jobs between 2003 and 2008?!?! Okay, not exactly a question, but-- damn. Did everyone go on a staff spending spree with their stimulus money? Did regulations and court decisions create a ballooning demand for special needs teachers? I mean, I was going to look for data to indicate whether that's abnormal growth or not, but I don't really need to. If that were normal growth, that would mean twenty yeas ago there were no teaching jobs at all, and I'm pretty sure that's wrong.

But that raises the real question-- are we looking at a shortfall, or a market correction after an employment bubble?

What is that projection based on? EPI says we should have added 123,000 jobs over the 2008 numbers (or 377,000 over where we are now) in order to keep pace with student growth. I'm curious about exactly what formula was used top determine that number.

Where is the understaffing happening? If this chart and the EPI interpretation of it are correct, we have schools that are grossly understaffed, overworked, and financially strapped. Everything I know tells me that is true-- but not everywhere. My own school, for instance, has shed many staff positions in the last ten years, but we have also dropped student population considerably. The same story is true in most districts in my region.

So has somebody done a more specific regional study? Do we know exactly where local public schools are failing to keep staffing rates up to speed with student population numbers? This is definitely more of a problem in some places than in others-- do we know where those places are? And do we have some data beyond the anecdotal?

The Great Recession was hard on teaching as a profession, and it raised the curtain on reformster policies that were also hard on the teaching profession, particularly in public schools. Given the number of people who have been chased out of the profession, this chart is but half as picture, and too broad of one to be really useful. The profession is hemorrhaging teachers, particularly teachers of color and young teachers, and where it is not hemorrhaging them, it is chasing them away vigorously by making the profession as unattractive as possible (looking at you, North Carolina).

Are we shedding jobs to keep up with shedding teachers? Are we chasing teachers away by shedding jobs? And most importantly-- how do these dynamics play out differently from place to place?

Ultimately this chart raises many questions for me. If you have the answers, let me know. If I find any answers, I'll pass them along.

Posted by Peter Greene at Monday, October 13, 2014
Email ThisBlogThis!Share to TwitterShare to FacebookShare to Pinterest