Whatever Happened to Affordable College Education

I enjoy the blog Curmudgeon Central not just because the name makes us some sort of internet cousins, but because the writer, a college professor in Texas, makes me look like Little Mary Sunshine.

Recently, he published a post that jumps off from this internet meme 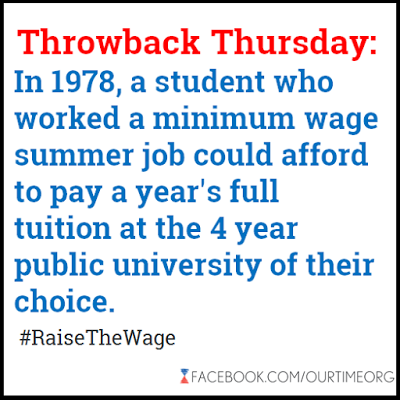 If you are of a Certain Age (say, mine) then you recognize this is more-or-less accurate. I graduated from college in 1979, but it was a pricey liberal arts school, but my summer job certainly amounted to Real Money in that context. Fast forward to my children, college grads of the 20-Tens, and we're looking at tuition bills that weren't even covered by my full-time job, let alone their summer jobs.

Politico's infamous fact (kind of) checker (sort of) took the meme on, but Curmudgeon Central is not a big truster of Politico, so he did some math of his own.

So… what are the real figures? Well, that summer job: 13 weeks, 40 hours a week, minimum wage ($2.65 at the time) would generate $1378 in income (before taxes). A year’s tuition and fees at the average four-year public university at in-state rates in 1978-79: $688. The summer job, it other words, would for tuition and about half of room and board at the average four-year state university, where the total year’s bill would be $2145. That’s 200% of the cost of tuition, or 64% of the total cost of attendance. Yeah, yeah, sure. Some flagship state universities would have cost more. Students still had to buy books and other supplies. The occasional late-night beer and pizza was de rigeur. And that wages figure was before taxes. [Please note: all figures below exclude taxes. Curmie isn’t so naïve that he thinks they don’t matter, but inserting a qualifier every time I cite a statistic is going to get really old for both of us. Please consider it stipulated throughout.]

The piece delves into the real numbers, and then addresses the Big Question-- why the hell did college get so expensive? He presents four reasons:

1) Wages haven't kept pace with inflation. As noted by a gazillion different people, in real dollars, minimum wage has been drifting slowly backwards.

2) Increasing expenses. Everything from additional student amenities to the kudzu-like spread of administrative associate assistants to vice-deans of pudding has upped the costs of operating a university.

3) Fees. Extra fees. Fees that look like options, but which are not. Some universities have taken lessons from the phone company and now use a price structure based on a $10 charge augmented by $150 in fees.

4) State funding. Or rather, the cutting thereof. Here in PA, where we can boast the lion's share of the most expensive public universities in the country, we have this mastered.

Maybe it's my heightened sensitivity because I teach high school and because I expect to be paying off Parent PLUS loans until I die, but I'm always mystified at the degree to which college affordability is not more vehemently and repeatedly discussed in this country.

We have let a college education become a luxury item available only to the well-off and in the process turned higher education from an highway that provides mobility between socio-economic classes into a huge wall that helps keep the classes separated. We have made it the goal of all public education to make students ready for college while paying little or no attention to their ability to go there. We might as well teach all of our students classes in How To Do Maintenance on Your Lexus Fleet or How To Properly Manage a Staff of 25 Servants.

At any rate-- take a look at this article. It has actually facts and stuff, with plenty to think about as well.