Support for the Core among teachers has been cut almost in half. That is just one of the findings in a survey released today by Michael Henderson, Paul Peterson and Martin West in Education Next.
The survey, administered in May and June of this year to 5000 adults, provides info on several issues. With charts and graphs! All of this has to be viewed through a careful filter-- EdNext is a reformster advocacy outfit. But that's part of what makes some of these results surprising.

The survey is not loaded with good news for fans of CCSS, and that's a group which includes the people at Education Next. By this survey's measure, the picture has changed considerably since just last year. Take a look at this handy chart.

The actual surprise in this data-- that support for the Core has stayed strong among Democrats. And make sure to note the phrasing of the question-- this poll was conducted by a group that supports the Core, and this is a question that has put the best possible spin on the Core. And this is still the result they got.

Interesting sidelight-- when they dropped the actual words "Common Core" from the question and just asked about "standards," they found public support increased to 68%.

I'm hoping leadership in both unions takes a good hard look at this result. Again-- a group that is committed to promoting CCSS, that has a vested interest is being able to say that people and teachers love the Core, has determined that teachers do not love the Core much at all. Please pay attention, union leaders.

What exactly has kept Democrat support so strong is a bit of a mystery, but it tells us who needs to be taken to school on the issue. The drop in support among teachers is predictable, given that many teachers spent the last year learning that the Core was not the benign set of standards laden with teacher freedom-to-interpret that we had been told previously. Familiarity has, in fact, bred contempt. The GOP drop in support is also predictable given the onslaught of conservative opposition. The real mystery there is how much of the opposition comes from people who actually know what they're talking about.

Oh, wait! They asked that question, too, sort of... 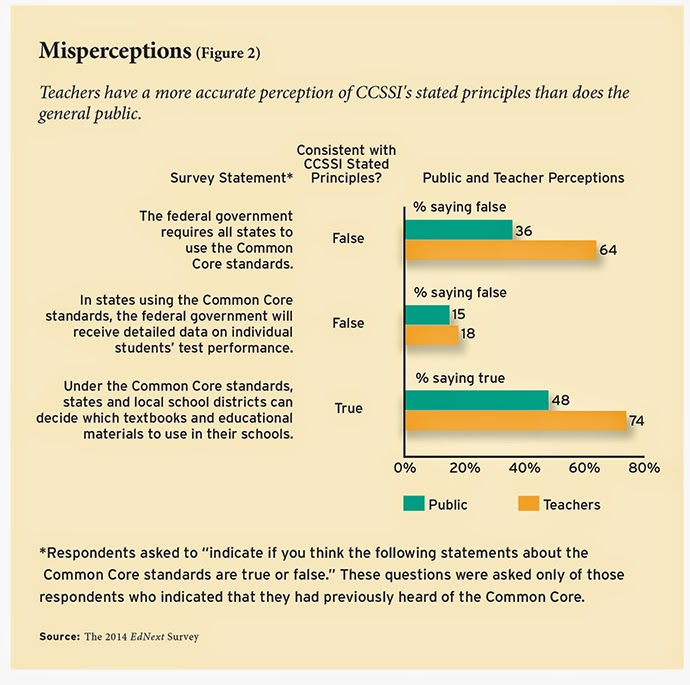 Trying so hard to skew this survey. Note that they only asked these questions of people who claimed to have heard of Common Core. For teachers, that was 89%, but for the public, a mere 43%. So if you wanted to play correlation days, you could argue that the better people know the Core, the less they like it. Though, of course, the "knowledge" questions depend on statements that neatly sidestep issues such as how "free" local districts are in their decision-making.

The survey also looks at some teacher issues, with an eye toward tenure and related issues.

First, let's see what people think on the How Many Teachers Actually Suck issue. 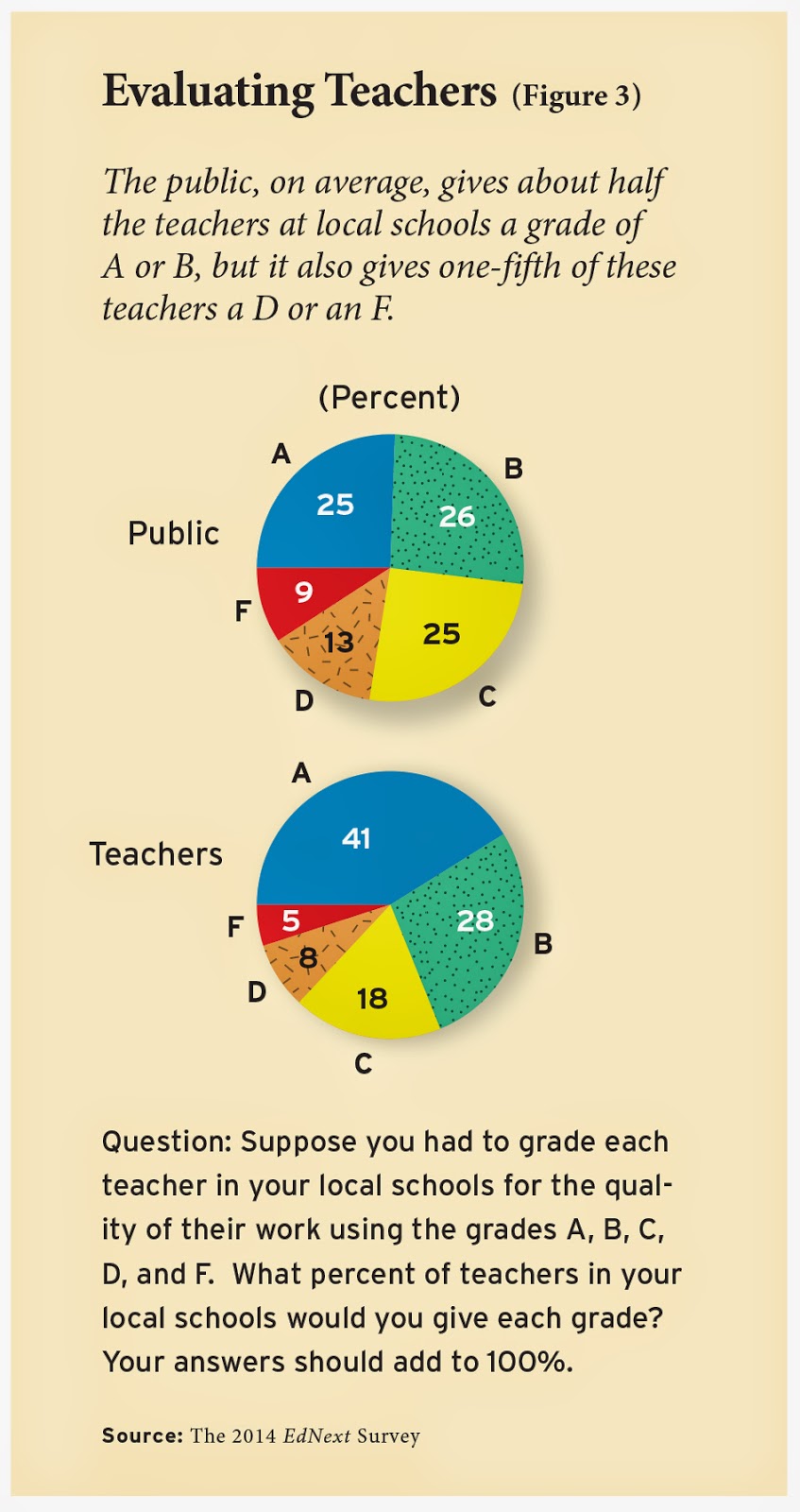 So, the consensus  is, not that many. How about tenure?

Perhaps because the public is concerned about the performance of some teachers, 50% of those interviewed oppose “giving tenure to teachers” altogether. Only 32% favor the idea (and another 18% take no position). We followed this question with another asking whether teachers should demonstrate that their students are making adequate progress on state tests in order to receive tenure. Overall, 60% of the public liked the idea. Even 65% of respondents who favor tenure say it should be based on student performance. Only 9% of Americans favor “giving teachers tenure” and oppose using student performance on state tests to determine tenure.

You'll note that the survey did NOT check for how well the respondents actually understand what tenure is. Nor did they as if respondents believe that teachers should be protected from being fired for arbitrary, political, or personal reasons. So we have no way of knowing how many people oppose tenure because they incorrectly believe it is a job for life.
On merit pay, which the survey expressed as “basing part of the salaries of teachers on how much their students learn,” 57% of the public supports it, but only 23% of teachers do. No surprises there.

Still reading? Good for you, because there's more in the survey. They next addressed the issue of alternatives to public school.

They asked an interesting question-- what sort of schools have the children in your home attended? The breakdown between public, private, charter, homeschool-- that's all interestingish, but the really interesting news is that the results were basically identical for teachers and non-teachers. In other words, teachers are just as likely to private school, charter school, or home school their kids as anybody else.

They also asked about support for voucher programs. This has interesting implications for those who think that the best way to get voucher programs going is by using them for low-income students.

So, tax credits for business is great, but giving vouchers to those poor folks, not so much.

Also, the results for "blended learning" were about even.

The bottom line here is that people favor spending money on schools until they understand how much money we're talking about. Support for class-reduction is high, then drops when you tell people who much it will cost. Support for paying teachers more was high; then the surveyors explained how much teachers make, and the support dropped. The writers do not say what they used as figures for their explanation of what teachers actually make.

There is plenty to chew on here, and it bears repeating that there's no reason to expect scientific objectivity from EdNext; the article makes several recommendations about how reformsters need to use spin and PR to sell their ideas better educate the public. Mostly they conclude what teachers already know-- it's not just how you teach 'em, but what you teach 'em.


Posted by Peter Greene at Tuesday, August 19, 2014
Email ThisBlogThis!Share to TwitterShare to FacebookShare to Pinterest