Jeanne Allen's magical phrase, turned into a rhetorical weapon against her and other free market choicers, never seems to quite go away, perhaps because all sides find it an apt description of free-market choice. Right now they're getting ready to load up more backpacks out in LA. Allen was sure that this was a great portrayal of the awesomeness of choice, but I'm not sure we ever thought it through. 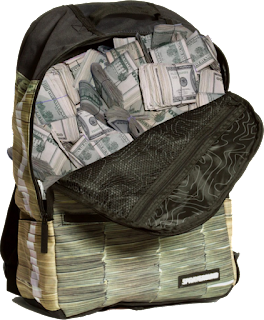 After all, in this vision of school, students are couriers. Their job is to carry backpacks full of cash to various vendors and business operators like little pack animals. The backpacks full of cash image unintentionally focuses on what many fans of the free market model are very interested in--easily moved, largely unguarded cash. We could as easily describe students as little foxes or minks, important mostly for the valuable pelts that they carry with them (and from which they will eventually be separated).

One of the great tricks of free market choicers has been to hide their primary focus in plain sight, and the focus is not education or even choice, but in free marketizing public education.

And yet, for years, few people stop to ask, "Hey, wait a minute. Why does school choice have to involve market forces? Why do we have to strap money to the backs of children?"

After all, we could offer school choice within a public system. We could offer a variety of different schools in one system. We could (and I'd argue already do) offer a variety of school options under one roof. If legislators believe that public schools are choking in too much red tape and regulation, well, then--get rid of them. Every educational goal that choice fans espouse could be met within the public system we already have. The goals the public system can't meet are the structural ones, the ones that are all about freeing businessmen to pocket some part of the vast stack of money we spend on education.

Why does a requirement of school choice have to be that private operators must make money from it?

I get that some folks have a sincere belief that market forces drive competition which drives excellence and innovation. I don't see a lot of evidence in the real world. Success in the market comes through many means other than excellence in products (eg Coke, Walmart, Microsoft), and once market dominance is achieved, market command is used to squash competition and buy up innovation before it can become a threat (eg see above). The free market does not foster superior quality; the free market fosters superior marketing. They compete over the fat middle and leave the outliers to fend for themselves (eg cable tv). Then multinational winners in the marketplace create their own sets of laws, regulations and bureaucracy that any nation's government would envy.

So I see no benefits to letting free market forces loose in a vital public service. On top of the fact that they don't deliver any of the benefits ascribed to them, they foster this view of students as pack animals tasked with delivering backpacks full of cash.

There are valid arguments to be made in favor of some version of choice. But none of them require the inclusion of privately owned-and-operated marketeers.

Of course, to offer choice within the public system would require more money. Choice as we're currently doing it requires more money, but various shell games are being used to hide that fact. But here we are in the same old place--we can think of cool things that might make education better, but those things would cost more money, and when it comes right down to it, we don't want to pay that much for the education system (our own kids, sure--but not for Those Peoples' Children).

So for some folks, the solution is to strap cash to the backs of children and turn them loose so that various business operators can compete at the work of coaxing the cash couriers into one business's doorway. Instead the object of education, the center around which school revolves, free marketeering transforms them into conduits of cash, one more cog in the machinery instead of young humans that the machine should serve.