Generally, when education secretary Betsy DeVos makes a public appearance, you get a rehash of the same old talking points. But put her in front of a friendly, like-minded audience, and she may just let her hair down and let 'er rip, giving us all a clearer picture of what she's really got going on upstairs.

That just happened this week as DeVos made an appearance at Hillsdale College. Hillsdale College, a super-conservative, uber-Christianish, Euro-centric college in Michigan, known for its strong resistance to federal anything and special treatment for any non-white non-traditional folks. They love Jesus and the free market with notable zeal. They have ties to both the Macinac Center and the Heartland Institute. They have a Charter School Initiative with a whole raft of charter schools (mostly "classical"), and a teacher prep program. In short, these are Betsy DeVos's people. 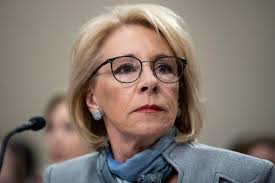 DeVos's prepared remarks open with nods to Hillsdale's history of awesomeness, with special attention to how smart they've been to avoid getting help from the feds. And that lets her pivot to her current fave point--that the Covid crisis has "laid bare" all the Bad Stuff of US public education.

"Sadly," she continues, "too many politicians heed the shrill voices of the education lobby and ignore the voices of children, parents, teachers and health experts who are begging to get our students back to learning."  Not Betsy-- she's a fighter, fighting for students and parents and against anyone who wants the government to be "parents to everyone."

Now she pivots to world history, and a chapter that is actually new--and revealing.

DeVos wants to talk about a guy long associated with her beliefs, named Abraham Kuyper. Kuyper was a 19th century Dutch theologian/politician who also founded his own newspaper. He was a staunch opponent of modernism in theology, aka the idea that the interpretation of scripture should take modern science, knowledge and ideas into account. He's the granddaddy of Dutch Reformed Church. In the Netherlands, he put together a Christian political party, and pushed the idea of "common grace," the idea that Christian faith should permeate every aspect of daily life. The State, he asserted, must take into account the Bible. Christ should be the Lord over nations, not just the church. And the government should not discriminate between funding secular institutions and religious ones. I am seriously short-handing the work of a guy who was an extraordinarily prodigious writer, but you see why DeVos is a fan.

DeVos, like others, sees Kuyper as a guy who stood up to those modern ideas that came out of the French Revolution (sometimes we call them the Enlightenment). There's some debate about whether or not we can lump Kuyper in with the Dominionists, the folks who think Christians are supposed to take charge of society's institutions until Christ returns, but here's what DeVos says to the Hillsdale crowd:

Tragically, it’s because no one has taught them differently. And worse, some have been indoctrinated to believe not in themselves, but in government.
Yup, it's entirely the teachers and schools, and not, say, the visible, palpable and painful ways that market based ideology has failed an entire generation. History shows us the best way to beat back socialism within this country--a robust demonstration, shared by all citizens, of the power and rewards of market capitalism. But no-- definitely socialist indoctrinators in the classroom (because teachers have so much time for that).
And that's not all that schools can be blamed for: "America’s cities ablaze today witness a failure to teach the things that make the American experiment work."

And now, DeVos is going to go Full Trump-- They're coming for you!!
So, the unholy mob thinks our economies need redistributing. It thinks our Constitution needs rewriting. It thinks our families need restructuring. One prominent group was explicit about its desire to “disrupt the Western-prescribed nuclear family structure.”

That’s taken right from the old Marxist playbook. It admits the goal is to “[do] away with private property and [educate] children on a communal basis, and in this way [remove] the two bases of traditional marriage.”

Even Marxists know the family is it. The family is at the center of our economy, of education, of culture—and it’s under attack today.
Damn that unholy mob. She also invokes the evil attacks on Amy Coney Barrett's "big" family. Because family family family family. Which, you know, would mean more perhaps if the US weren't among the worst countries in the world for family leave to take care of newborns and this administration weren't trying hard to shred the safety net for struggling families. But the attempt to invoke the sanctity of the family loses much of its power when it is not attached to any attempts to actually help families through any means other than insuring that they have the "freedom" to sink or swim and their needs are always subordinate to the needs of business and corporations (why have they lost their faith in the free market, again?)
But DeVos-channeling-Trump is still on a tear. Conservatives are under attack everywhere in the social medias places thingies. Cancel culture! Censorship! Those who talk "tolerance" are so intolerant! And "this environment makes it harder to protect principle."
But protect them we must! Kuyper said "arrows do not exist simply to be kept in the quiver" and DeVos says not to shrink from that metaphor. "Moms know what I mean. We know what to do with an arrow when our family is under attack." Which I guess is the DeVosian 19th century version of a Trumpian call to go mess up our opponents.
[Update: Adam Laats points out there's another layer here.
It's WAY worse than [that]. It is about using women as "quivers" to birth new champions for Christ.
Put together with the support of Barrett's family, yeah, this is something. You may have heard the term "quiverfull" before; you can read a bunch more here.]
So, says DeVos, let's challenge the culture--with education. "Because we don't believe in retreat. We believe in redemption." Boy, I would love to sit down with her and try to unpack that. Before we can redeem people, we have to kick their asses? This mix of violent get-out-the-arrows confrontation with redemption language is--well, I was raised Methodist, and I don't recognize this language. And then:
Let’s begin by reasserting this fundamental truth: the family is the “first school.” If we recognize that, then we must also reorder everything about education around what the family wants and what the family needs.
Let's please not stop with education. Let's reorganize health care and health insurance around what families need and want. Let's reorganize business and the economy around what they need and want. Let's rewrite some of the rules so that families can share in the nation's prosperity instead of hanging on for dear life on the bottom end of the biggest income/wealth gap in the history of civilization. And, by the way, let's talk about "families" instead of "the family," thereby recognizing the many rich and varied forms that family takes in this country.
Don't check out yet. If you needed one more clear statement about what DeVos wants, she's using it for her wrap up:
We are families. Education is our sovereign sphere and we are taking it back!
"Sovereign sphere" is Kuyper, and it refers to the idea that some spheres of society should be free of government involvement. The refrain is also familiar in conservative Christian circles with the idea that schools need to be "taken back" from the government. Everything else DeVos says about education is window dressing and attempts to win the argument; at heart, that's the simple goal.
Posted by Peter Greene at Wednesday, October 21, 2020