What The Heck Is A Chief Innovation Officer? (And Does Your District Need A Proactive Change Agent Visionary Leader To Transform Your Human Capital With Capacity-Building Systems?)

My college job was in the private sector, working in the education and communication department of an industrial manufacturing company. In ways that my college education could never hope to, my time there drove home how there are plenty of folks making a good living using language to obscure rather than reveal, the there's a whole art of using language to try to convey importance and weight while cloaking the actual content of those words with smoke and mirrors. On the one hand, it's appalling, like watching someone use the Mona Lisa to scrub the grime off their car. On the other hand, it's its own kind of hilarious language, a linguistic emperor's new clothes. We entertained ourselves by cranking out faux bulletins in corporate argle bargle; I actually have a bound collection of our best work. 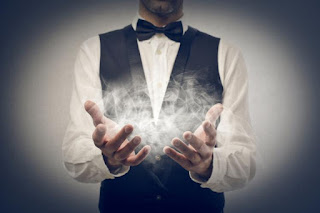 I am reminded of all that when I read some of the corporate baloney unleashed on education (not that education doesn't have its own ridiculous jargon). Take, for instance, the new-ish corporate ed reform job of Chief Innovation Officer. Right off the bat, we know this is corporate-style baloney, because of the desire to signal this is a Real Important Job by making it C-level with a Chief in front. The whole trend of turning school administration jobs into "chief" jobs is about "translating" education-speak into corporate-speak.

The Center for Digital Education offered its own balonified exercise in explaining CIOs in 2013; you know from the very first paragraph it's going to be richly foolish:

Chief innovation officers are slowly popping up in school districts around the country. Some say they fill a gap in leadership that's preventing education from moving forward.

First-- "slowly popping up"?? I'm trying to imagine slow-popping popcorn, or a jack-in-the-box that emerges like an arthritic octogenarian. Nope. If you're going to pop up, you can't do it slowly.  Second- "some say"?? Some what? Some corporate guys who want to remake education in their own image.

It turns out that "around the country" meant "in at last four school districts" in 2013. The article features plenty of unfounded assertions, like "Right now, probably 70% of school districts  need a complete makeover." Don't expect any support or elaboration for that. The article interviews a new CIO who's supposed to provide "visionary leadership" and who says an "exciting piece" of his job is "to empower people  and build capacity in a way that inspires." But the article also notes that the CIO job description is varied from place to place; in Detroit, the  job is simply "to better prepare students for college." What that has to do with innovation is not clear.

Not that the corporate world where the term originated knows either. The term supposedly comes from a 1998 book, Fourth Generatio R&D,  and wikipedia says it's for the person most reposnible for managing change, who comes up with new ideas and who recognizes them when other people bring them up. Inc offers its own explanation which involves championing innovation and driving new growth. Back in 2009, Forbes was sure that you needed one for your company. LinkedIN shows close to 200 openings at the various times I looked.

Education has always been where corporate fads go to die (before Outcome Based Education, there was Management By Objectives), but modern ed reform, with its belief that education needs to be run like a business, has accelerated that process. So as we saw above, CIOs were a coming thing in 2013. In 2016, edWeb was explaining why schools needed a CIO in the same graceless language

Education is experiencing an extraordinary transformation that requires Innovative Leadership to implement major change initiatives and redesign numerous systems within a school district. A strong movement driven by Future Ready Schools is charging toward a personalized learning environment to prepare students for college, career, and life readiness that links the learning in the classroom to a real world setting.

It just sounds so smart, you know. Major change initiatives. Redesign numerous systems. Charging toward a personalized learning environment. It has the solid ring of corporate argle bargle-- you almost know what it means, close enough that you assume that with some specialized training you'd have a better idea what exactly they mean. That's a more charitable assumption than figuring that they are keeping the language vague and grand because they themselves don't know exactly what they mean, but they still want to make the sale. It's like moving a product by giving it a fancy designation, like JSB-400; it makes it sound hard-edged and sciency, even if you just made the whole thing up. Corporate reform wants to sell itself as hard-nosed scientific management, and so we get this language to hide the fact that they are just as vaguely fuzzy-headed as those bleeding heart humanists who want to call teaching an art.

Meanwhile, you can get a CIO certificate to prove, I guess, that you are a visionary change agent of environmental disruption. And higher education is being scolded for having only 25% penetration of CIOs.

To really capture the baloney-fest, here comes Bellwether Partners with an interview with two CIOs-- Margo Roen (Education First) and David Saenz (Forth Worth ISD).

Roen's view of the job is more entrepreneurial-- grab data, look for "gaps," fill gaps through "internal capacity building or external partnerships," and then "formalize these strategic partnerships through performance contracts that clearly lay out expectations, autonomies, and supports for partners." So, figure out what test  prep you need and hire  some companies to provide it. Saenz is more managerial-- the CIO handles "change management" with various projects and communications with "internal and external partners," plus knowing how all the parts of a school district works. So, pretty much a superintendent.

Roen notes that there is still "not one prototype for the role" which is charming but really, what other job could get away with that. Certainly nobody's response to "We need more evaluation and accountability for teachers" is not "Well, there really isn't one prototype for the role." Roen believes innovation "can help create new solutions and more equitable systems, and use a more focused process to surface innovation needs." So, figuring out what  problems ned to be solved and solving them-- is that really innovation, or just basic management?

Saenz gets to describe a typical week, and it's mostly meetings, but wow, what meetings. His typical week is "centered around meeting with a wide range of stakeholders to help foster collaborative decision-making as we address gaps in our district." He facilitates the work of the Office of Innovation, including the Innovation Action Team, a "cross-functioning team" with  all sorts of key officials (including the "human capital office.")

Saenz also talks about the supports in place, like a "district culture" that enables CIOs "to push the limits of their district's capacity and form new schemas for how we manage our schools." He also lapses into plain English long enough to say that a lot  of this is about charter school authorizing. Which for some of you will come as no surprise at all, because "innovation" these days is a euphemism for "privatization."

Which brings us to the last question in the interview-- why would a superintendent want a CIO. The argle bargle answer is that they are too busy with the daily problems and putting out fres that they lose the big picture. In other words, reformsters have found that getting their agenda fulfilled sometimes takes a back seat to actually running the district, so if the district could have someone working on privatizing full time, that would be a big help. Or, if you prefer, someone "who who is solely focused on the big picture, who shepherds forward an annual cycle of proactive evaluation and planning, and wakes up and goes to sleep every day thinking about the range of options and quality in the district."

All of this noise is generated in service to two obscure two things: 1) nobody pushing this stuff can offer  a specific, concrete explanation of what it is and 2) it's about  privatizing and profiteering.

It also reminds us of a point that is perhaps not made often enough (my hat is tipped here to Andrea Gabor, who addresses this really well in her book After the Education Wars) -- that we have a problem not just with reformsters who want to use business methods to manage education, but with reformnsters who want to use lousy business methods to manage education.

For teachers, the important point is to believe your own eyes and ears. You know language, and you know baloney when you see it. When it looks like someone is trying to fake you out with a bunch of baloney, they probably are. In this case, they definitely are. If you think you can see the emperor's bare ass, it's because you can. Do not be intimidated by what a friend of mine use to call Big Wig Lingo.

And for the people pushing this stuff. Take a step back, really looking at what you're saying, and ask yourself if anyone should take this kind of billowy jargon seriously (spoiler alert: the answer is no). If you really have something to say, you'll do better in plain English.