KY: Starting the New Year With Threats Against Teachers

Sadly, it's not unusual for teachers to start their new school year by being threatened, but even the worst administrators understand that it's useful to at least pretend that they think of teachers are respectable grown-up professionals. But in some districts, bosses go straight to thinly veiled warnings. And then there's those special rare occasions when teachers start the school year by being threatened by their state's governor.

All discussions of teacher upset in Kentucky have to start with one important reminder-- teachers in Kentucky will get absolutely nothing from Social Security when they retire (surprised? There are fourteen other states where that is true).

So when you mess with teacher pensions in Kentucky, you are threatening teachers' entire future. 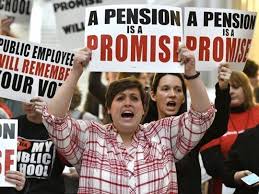 The recurring strikes in the newly right-to-work state of Kentucky have been about issues related to the teacher pension, an always-tender subject, as it is possibly one of the worst-funded pensions in the country. So, in  2018 it was about a sneaky attempt to kneecap the pension fund. And in 2019, it was about an attempt to strip the Kentucky Education Association of its power on the pension board. This is a logical next step in a right-to-work state that is just flexing its muscles and trying to  disempower the teachers union. Some media dutifully note that KEA "only" represents 43,000 active and retired teachers, without providing the context that there are just under 43,000 teachers are working in Kentucky.

The state wants to give more power to the Kentucky Association of Professional Educators, one of those non-union unions. They say they aren't anti-union, but they also proudly list the many things they don't do, and just leave the "like those other guys" part silent. They've been at this for quite a while, providing teachers with, basically, liability insurance and propaganda to counter that nasty union propaganda, while making it a point not to take a position on any legislation (aka supporting the party in power, aka GOP). Many legislators (GOP) belong to the group, which heads its website with the motto "KAPE Stands for Truth." It might be nice if they also stood for teachers.

KAPE has about 3,000 members, but the legislature would like to see them on equal-or-better footing  with KEA on the pension board, thereby playing into a long-standing tension between the two groups.   Legislators say they don't like the idea of one group having so much say over the pension, which is a little bizarre when you recall that the pension being discussed belongs to KEA members. Kentucky teachers found it  more than just bizarre, so they walked out again.

Which brings us up to the threatening part.

Kentucky's Labor  Cabinet announced that they believed that the teacher walkout was illegal, and that they had the authority to hit every teacher who walked out with a $1,000 fine. Governor Bevin, a DeVos BFF who has made it more than clear that he's no fan of teachers or public education, decided not to actually levy the fine, but his Labor Secretary made it clear that next time, books would be thrown

“Let it be clearly understood that the grace extended in this instance will not be extended for future such proven violations,” he warned.

Kentucky House Democrats at least seem to have a grasp of the situation:

House Democratic leaders responded with a joint statement, saying, “This administration has tried every trick in the book to undermine our teachers and their supporters. Its Labor Cabinet threatens them with fines for exercising their right to be heard on legislation directly affecting them; its Finance and Administration Cabinet all but locks the doors to the Capitol to shut down any form of dissent; and the governor calls them thugs and tries to take away their retirement. Our teachers — and all of Kentucky — deserve better than this.”

You generally don't want to start the school year with a message that says, "We have more plans for you guys, and whatever we decide to do, you had better just sit there and take it quietly--  or else." But the Kentucky governor and his GOP allies have been consistently unpleasant to teachers for a while now, and Kentucky teachers remain largely unbowed. Stay tuned for what comes next.
Posted by Peter Greene at Monday, August 19, 2019