Bad Laws in Texas: The Opposite Side of the Holocaust

Look, this is what you get when you hastily pass a sloppy law. Particularly if it has to do with schools.

I feel sorry for Gina Peddy, the Carroll Independent executive director who was caught on a recording telling teachers that, if they have a book about the Holocaust, they should make sure to have one "that has an opposing, that has other perspectives."

Carroll Independent School District, located in a "mostly white suburb 30 northwest of Dallas," has a reputation for being a great school district. But this is not the first time they've been in the news. Back in 2018, partying students from the district posted a video of white high schoolers shouting the N word, and one Black parent decided she had had enough. Families stepped forward to share the many tales of racist insults against Black students. It took them two years to address their racism issues (and in the meantime more offenses occurred), and that involved a plan to require diversity and inclusion training as part of the curriculum. It took aggrieved white parents a couple of days to put together a political action group and to start packing board meetings to shout the now-familiar claims of Marxism and leftist indoctrination.

And it has only been a week since CISD was in the news for reprimanding a teacher for having a copy of This Book Is Anti-Racist in her class library (a mom said the book violated her family's "morals and faith." Teachers in the district were supposedly told to sort through their classroom libraries and root out anything that some parent might find offensive. District leaders were trying to avoid any possible trouble; instead, they found themselves in NBC News coverage.

So Gina Peddy is not exactly the first person in the district to step in it.

This is what you get when you add a vague and ill-considered bill to a community that already has racism problems. Texas jumped on the teacher gag law bandwagon back in June with a bill that lists a bunch of specific does and don'ts for teachers, with some attempts to balance the slate as they dictate curriculum from the state house, including items like a requirement to teach "the history of white supremacy, including but not limited to the institution of slavery, the eugenics movement, the Ku Klux Klan, and the ways in which it is morally wrong."

But the law also includes the usual litany of anti-crt items-- no teaching that meritocracy is racist, no suggestion that slavery was integral to America's founding, and certainly no use of the 1619 project.  But you can't have a school policy of forbidding students to bring these things up. But a teacher may not be "compelled" to discuss "a particular current event or widely debated and currently controversial issue of public policy or social affairs." And that leads to this part:

A teacher who "chooses to discuss" any of the verbotten topics, events, or issues shall, "to the best of the teacher's ability, strive to explore the topic from diverse and contending perspectives without giving deference to any one perspective."

That's the part of the law you can drive a truck through. Other states that have copy-and-pasted their way to similar laws have included disclaimers, a list of some topics that don't have to be "balanced" that could include the Holocaust, but Texas hasn't done that. If it's controversial in any way, teachers are required to provide all sides and forbidden to favor any side.

If you've worked in schools, you know that a certain not-uncommon breed of administrator is driven by a prime directive--don't get in trouble. Don't get dragged into court. Don't get a bunch of phone calls.

I've said this all along-- what these bills will do is drive some administrators to tell staff, "Look, just don't do anything at all ever that could possibly get parents stirred up. Just stop doing all of it." You can stiffen their spines a bit if they can be certain that the law is on their side, but this law is an open invitation to rain grief down on the district.

So CISD has a "rubric" for deciding if a book should be anywhere near a school. It sucks. Nothing inappropriate (ie explicit, because we don't want people complaining about sexy seahorses here). The author should not have a visible bias (aka point of view or voice)--this rule guarantees really boring texts. And multiple points of view must be represented and not "a single dominant narrative" which is really nuts, because every well written work of fiction does just that. This rule alone rules out a book from "Green Eggs and Ham" (the anti-eggs side is presented, but ultimately the do-eat point of view dominates the narrative) to "Hamlet" (the murdery side of the narrative dominates). The rubric also contains the guiding question "How would the use of this book be perceived by all stakeholders." meaning that if even one person is upset, then that book needs to go. 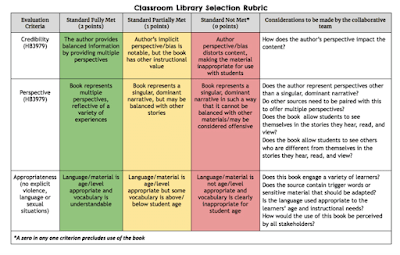 NBC News quotes the GOP senator who wrote the bill objecting to this mess:

State Sen. Bryan Hughes, an East Texas Republican who wrote Senate Bill 3, denied that the law requires teachers to provide opposing views on what he called matters of “good and evil” or to get rid of books that offer only one perspective on the Holocaust.

Except it kind of is. And waving the vagueness away with a reference to matters of "good and evil," as if that's a clear distinction that we can all agree on is lazy, and sloppy, much like the law itself.

When you draw a line that is vague and broad and hard to see, some district leaders are going to just try to stay as far away from it as possible so nobody gets In Trouble. If you listen to the recording, Peddy doesn't sound like some sort of calculating evil book-burning Nazi; she sounds like a floundering bureaucrat, whose superiors have tasked her with passing down the rules that are unclear and contradictory. I can just imagine the leaders of the district sputtering "Oh my God--we're in NBC News! Somebody fix this damned mess!"

It doesn't matter whether Texas legislators thought they were drawing a clear line in a defense against Badness (because everyone surely agrees on that) or whether they were deliberately trying to create a vague law that would better intimidate teachers; the result is the same. Bad legislation plus bad district leadership results in really, really bad directives for teachers. And, yes, this is all on top of all the problems we already have with racist and inaccurate textbooks, many aimed at the Texas market. But that's for another day. Today, let's just grow enough of a spine to teach just one side of the Holocaust--the truthful one.

Update: And the superintendent of CISD has issued a statement saying, in part, "We recognize that there are not two sides of the Holocaust," a sentence I would not have imagined any school superintendent would ever have to issue. But here we are. If you think we've seen the last of this type of fiasco, I have a bridge to sell you.