The good news is that the headlines is, as headlines will be, a bit inaccurate. The bad news is everything else. Starting with this lede:

President Joe Biden on Wednesday praised the nation's K-12 education system for fueling America's economic growth for almost a century. But, he stressed, that system may no longer be sufficient as the foundation for future prosperity.

We've been here before, starting with this fundamental misunderstanding of the problem:

Mr. Biden's American Families Plan is taking aim at an issue that has bedeviled economists as well as millions of families struggling to stay afloat financially: A high school diploma is no longer enough to secure a middle-class life. 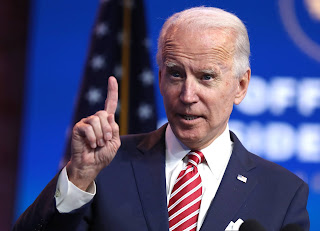 If the situation has changed, if all the good stuff has been moved to a shelf that is too high for regular folks to reach, is the problem that regular folks are too short, or that somebody moved the good stuff to a too-high shelf? The democratic/neo-lib theory is based on the too-short-humans theory, in part because the MarketWorld thinking of neo-libs is that the economic shenanigans that moved the good stuff to a higher shelf are inviolate, unquestionable, and not to be messed with (yes, go read Winners Take All). So instead we end up with the theory that if people are more educated, bad jobs that don't support a middle class lifestyle will turn into good jobs that do. Wal-Mart and McDonalds will say, "Well, now that our workers have better educations, we will spontaneously decide to pay them more." Companies will decide not to automate jobs or send them overseas because US workers have a better education.
Yes, I know. The theory is that a better-educated population will entrepreneur the hell out of things, growing mountains of great jobs. But the bad jobs will still exist, and people will still be needed to fill them. And it will not help if government is saying, "Well, we spent some money to have education fix it all, so we've done all we can, and those teachers better by God get to work on it."
"We know a good job with simply a high school diploma is almost impossible," said Arne Duncan, Secretary of Education under Barack Obama, during a Wednesday call with reporters to discuss Mr. Biden's plan.
Yes, having Arne back in the discussion is a great sign. Do we know that a good job with a high school diploma is impossible? If that's true (and I know a bunch of well-paid blue collar workers who would like to talk about that)--but if that's true, can we please talk about why? Is it because all the jobs require so super-much, or because we've stood back and let corporations break down jobs into "low-skill" tasks and pay bottom dollar to people who fill them, while the people at the top hoover up all the value and profit that the workers create? Jeff Bezos is a gazillionaire and his workers get peanuts--how exactly is this because those workers didn't get a good enough education in high school?
But--said some folks on Twitter when I was sputtering on about all this--isn't publicly funded pre-K a win? Isn't some publicly-funded college a win?
Well, yes. Yes, it is, for a number of reasons. Pre-K is hugely useful, though I wonder how necessary it would be if we hadn't spent two decades turning kindergarten into the new 2nd grade. Which is definitely on the table; David Brooks made some phone calls and was told that the administration wants children (we're talking 3 and 4 year olds here) "in the classroom." The Board of Directors here at the institute are just shy of four. My grandchildren are in a similar age range. My primary concern for exactly none of them is for them to get into a classroom.
That's the problem of course. Not that publicly-funded pre-K isn't potentially a great, game-changing thing, but that it be done well, that it be done in a way that is healthy and nurturing for tiny humans. We can say as one person did that we don't give a fart (I'm sure that's what the F stood for) about the underlying philosophies or rationale behind the pre-K because in the end, we get pre-K.
But the underlying rationale is going to determine what kind of pre-k we get, what is measured as success. The rationale will decide if "success" is happy healthy tiny humans or if success is higher Big Standardized Test scores or if, heaven help us, it's increased lifetime earnings according to some bad study or if it is an ample supply of meat widgets for corporations to consume.
Maybe this will be fine. Maybe it will be a straight up win. Maybe it will arrive in a functional form that has not been beaten up by the process, which will most likely be about politics, not policy or educational expertise. Maybe this will be fine. Maybe that big sharp knife the administration is carrying will be used for good. But I remember the last time we saw that knife, and that time, things ended badly.
Would a badly conceived and executed publicly funded pre-K be better than what we have? Probably. Hard to say. It may give some parents just enough assistance that they can use to get their heads a bit further above water. It might give some tiny humans a better shot. It might position the tiny humans to better cope with a kindergarten system that will make developmentally unsustainable demands on them. It might give them one more soft place to land besides home. If it does any of those things, it's a plus.
So I don't want to shout the idea down. I do want to hound policy makers mercilessly about not not NOT using a pre-K program to expand and extend all the bad policy ideas that Clinton/Bush/Obama administrations injected into K-12 education. And as it becomes increasingly clear that this administration loves many of those same bad ideas, I want to keep an eye out for their appearance elsewhere.
None of this is a surprise, but dammit, Joe--it is a disappointment.
Posted by Peter Greene at Friday, April 30, 2021