A few Wisconsin legislators have a dumb idea for a law. They'd like to spend $1.5 million on cyberschool-- on line computerized instruction-- for pre-schoolers.

This is just layers and layers of dumb.

First, cyberschools in general have proven to be lousy. Spectacularly lousy-- and that's in a study run by an organization sympathetic to charters.. Students would be better off spending a year playing video games lousy. So bad that even other charter school promoters won't defend them lousy. In short, outside very specific sets of special needs, there is no evidence that cyberschooling works. 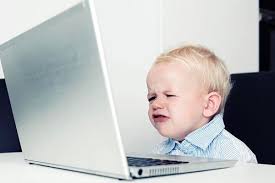 Second, while there is still considerable debate, the general consensus is that screen time for littles should be somewhere between very small amounts and none at all.

Third, academic studies are a lousy idea for littles, unlikely to yield real benefits even as they may create real harm.

But education committee chair Rep. Jeremy Thiesfeldt is either unaware or unconcerned-- well, I don't know how he can be either. The man has an elementary education degree (from Martin Luther College) and taught for some time at Winnebago Lutheran Academy. Now, yes-- MLC has as its purpose the cranking out of witnesses to the Lutheran faith (and playing sports). And yes, WLA is a private religious school that exists to "glorify God" (and play sports). But I've known plenty of Lutherans, and there's nothing about being Lutheran that would preclude knowing that cyberschools and academic instruction for littles is a lousy idea.

The program would be used fifteen minutes a day, five days a week, and would be piloted in a combination of rural and urban districts and would be added on top of the state's existing program for four year olds.

Thiesfeldt has some fairly specific ideas about what the program should provide.

The vendor would be required to show past success in similar endeavors; provide instruction in reading, math and science; design a program to improve a child’s transition to kindergarten; require parental engagement including interaction with a learning coach; evaluate a child’s growth; and provide internet and a computer at no cost to families that do not have them.

Also it would help increase reading scores. Because getting standardized test scores up should totally be the focus of pre-school education.

How did he come up with such a clear picture of what he wanted. Well,  he just happened to see a presentation (aka "sales pitch") from Waterford.org, the outfit that is an industry leader in infliucting cyberschool on preschoolers through their widely adopted UPSTART program. So, to recap, he's seen a pitch from one company that works in this field, and he's written a law tailored exactly to that company. I hope the marketing guy for UPSTART is being paid really well.

UPSTART popped up in Utah a few years back, a state that was investing $0.00 in pre=school education. In Utah they also used the business model of making friends with a legislator,State Senator Howard Stephenson, and his explanation was not inspiring:

“We want to reach the greatest number of children with the resources that we have,” Stephenson said. “I don’t think we’re being cheap at all. We’re being smart.”

I'm more inclined to go with this alternative theory.

“It’s wishful thinking by state legislatures,” said Steven Barnett, the director of the National ­Institute for Early Education ­Research at Rutgers University. “We want preschool, we want to get these great results, but we don’t actually want to spend the money.”

Sadly, UPSTART has been spreading like a weed-- a big, cheap weed. Indiana. Mississippi. They benefit from, again, the cheap, plus the shiny computers, plus periodic outburst of uncritical just-run-the-news-release press. The idea of plunking three and four years olds in front of computers to do academic work has become widespread enough that Defending The Early Years actually took the time to write a report pointing out that putting pre-schoolers in front of computers to learn to read is a terrible idea.

Waterford's website trumpets "Do you know 2.2 million children do not have access to public-funded early education?" which is a compelling statistic, except that it compels me to agitate for public-funded pre-K for all and not a cheap, unproven, bad idea of a software program. But it's really shiny, and it promises a cheap technosolution; the TED-linked Audacious Project handed Waterford $20 million. Waterford calls their program "Award-winning" and boasts that their DIBELS scores (that's the test in which small children decode nonsense syllables, Exhibit A in "When phonics goes too far"). UPSTART also "improves cognitive outcomes," and, no, sorry, but no, you have no idea whether or not it does any such thing.

Their business model, as we've seen, seems to focus on getting paid with tax dollars, which allows them to market their product as "free"! Oh, and they're "non-profit," so you know-- no, you don't know anything other than there are no stockholders making money here. As multiple non-profits have shown, "Non-profit" and "intensely focused on making money" are not mutually exclusive.

Ah, well. It appears that Wisconsin is poised to join the states that would rather get pre-K cheap than right. Bad news for Wisconsin's children, good news for the UPSTART marketing team. Ka-ching.

Posted by Peter Greene at Sunday, December 22, 2019
Email ThisBlogThis!Share to TwitterShare to FacebookShare to Pinterest