Teaching While Black has been problematic for decades.

If we roll the clock back to the Brown vs. Board of Education, we discover a response that some folks have just forgotten all about.

In the spring of 1953, with the Brown vs. Board of Education desegregation case pending in the U.S. Supreme Court, Wendell Godwin, superintendent of schools in Topeka, sent letters to black elementary school teachers. Painfully polite, the letters couldn't mask the message: If segregation dies, you will lose your jobs.


"Our Board will proceed on the assumption that the majority of people in Topeka will not want to employ negro teachers next year for White children," he wrote.

The USA Today piece from 2004 lists a variety of chilling statistics. In 1954, there were 82,000 Black educators; in the eleven years after Brown, 38,000 of them lost their jobs in the Southern block of states. Number of Black teachers hired in Arkansas desegregated districts between 1958 and 1968-- zero. Black principals were driven out of the profession even more aggressively. Between 1967 and 1971, the number of Black principals in North Carolina dropped from 620 to 40.

The practice of nudging, pushing, shoving, ramrodding Black teachers out of the profession has been around for decades. They are, in fact, Exhibit A in the argument in favor of tenure. In the same article, we're reminded that Black teachers were also fired for voting and for joining the NAACP.

So are we doing better nowadays, now that we've dubbed education the Civil Rights Issue of our time? Ha!

Education reform has not made the prospect of Teaching While Black any more attractive than ever. Beyond the more isolated incidents, like the bizarre incident in which a Black principal fired Black teachers for teaching too much Black History (at a middle school at historic Black Howard University), or the appalling NYC principal who called some teachers "nappy-haired," "big-lipped" and "gorilla in a sweater" before firing them.

Most notable in the recent past is the massive firing of Black teachers in post-Katrina New Orleans. The teaching force went from 71% Black to less than 50%, not just a blow to equity in the classroom, but a gut shot to New Orleans' middle class.

And then there's this, from the ever-erudite Jersey Jazzman. He and his research partner Bruce Baker have often noted the disproportionate impact of reformster activity in New Jersey, but this newest piece makes it plainer than ever. I strongly suggest you read the whole thing, but I'm going to focus on what I found most stunning.

In fact, one school, Francis K. McGraw Elementary School, is one of the top schools in terms of the math growth measure and they are right in the middle for the ELA growth measure. McGraw is on par with some of Camden's carefully creamed charters for beating the statistical predictions that go with their demographic make-up. And in fact, none of the five targeted schools have the most struggling statistics for any measure.

You know what McGraw does have the most of? Black teachers.

In fact, take a look at this chart that I am going to borrow from Jazzman's piece: 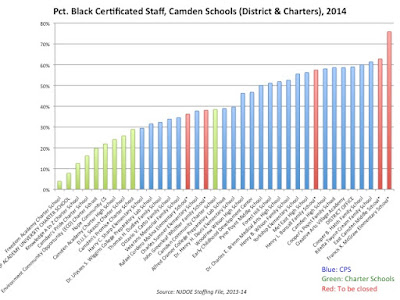 Because, notice which schools have the lowest percentage of Black teachers? The charter schools.

Look, I'm not even going to argue about whether we need more Black teachers in the classroom. We do. Students don't need to be taught exclusively by folks who look like they do, but no child should spend a day in a school where no adult looks like that child. We know that we are losing non-white teachers faster than we lose white ones. Good lord, even Teach for America gets that they need to aggressively pursue non-white TFA temps-- and what do they get for the effort? Racist blather.

We see it over and over. Failing schools keep turning out to be full of non-white, non-wealthy students, and "rescuing" those students keeps meaning that we silence their parents and neighbors and then shove out their non-white teachers.

After crunching the Camden numbers, Jazzman* reach this conclusion:

Put simply: black and experienced teachers are more likely to have to reapply for their jobs under the Camden "transformation" plan than white and inexperienced teachers, even when taking into account their schools' student populations and growth scores.

And all of this is before we even talk about what non-white teachers deal with if they aren't pushed out. The problems of TWB are not new, and they're not exclusive to places under the thumb of reformsters. But reformsters sure aren't making things better by continuing to act as if better teachers are somehow whiter ones.

*Update: The earlier version of this noted Baker as a co-author of this particular brief. That was incorrect.
Posted by Peter Greene at Thursday, July 09, 2015
Email ThisBlogThis!Share to TwitterShare to FacebookShare to Pinterest