How Much College Remediation Is Really Needed?

When reformsters want to beat the College Ready drum, they get out the sticks of college remediation statistics. Tons, mountains, endless chains of entering freshmen must be remediated, they declare. Clearly, high schools are turning out defective products. Something Must Be Done. Otherwise we will continue to fall behind Estonia and be conquered by Finland or Vikings, or something.

I've talked about this before, and I've offered some explanations.

2) Let's make students take extra courses that we can charge for but which don't count toward a diploma. After the original post, I heard from college folks who swore no such thing happens ever, and college students who said, "That totally happened to me," so I'm concluding this is a localized issue and not a universal one.

3) Marketing. We've been trying to convince all students that they must all go to college or they will end up alone, unloved and living in a one room apartment over a hardware store and eating cat food they've warmed up on a hot plate.

Bonus reason) As we spend more and more time getting students ready to take standardized tests, we spend less and less actually preparing them for college.

Well, thanks to blog reader Ajay Srikanth, I've been reading up on the work of Judith Scott-Clayton. Scott-Clayton and colleagues Peter M. Crosta and Clive R. Belfield published some research back in 2012 on this very subject, and Scott-Clayton (Columbia University) penned this little piece for the New York Times.

She was spinning off an article about how early medical screening might not be all it's cracked up to be. And she applies the same thoughts to college placement exams and the remediation they often lead to.

While remediation rates based on placement exams has increased dramatically, Scott-Clayton notes that the major increase is among students with strong high school grades.

For students with high school grade-point averages between 3.5 and 4.0, remediation rates have more than doubled (see chart below). This is not a result of high school grade inflation – the percentage of students with G.P.A.’s in this range has not changed – but is consistent with increasingly ubiquitous placement testing. 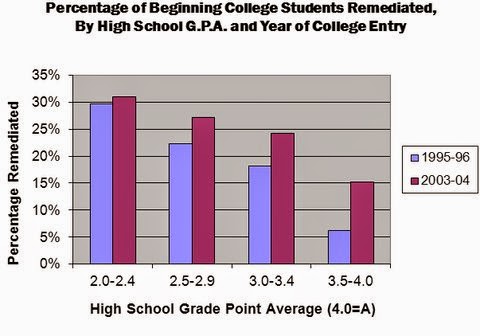 
Scott-Clayton considers two important questions raised by all this.

First, is there even any benefit to the remediation, because "remediation has been referred to as the Bermuda Triangle of postsecondary education, because the majority of those who enter never make it out. "

The second point is so obvious I feel foolish for not having originally considered it.

Scott-Clayton, whose research covers this very subject, says "the tests commonly used to screen for college readiness are only weakly related to college outcomes" and cites two studies mentioned in another NYT piece that say so. Students who go on to have trouble in college pass the test, and students who would have done just fine fail it. This is a murky area of coulda-woulda-shoulda, but Scott-Clayton estimates that one in four remediated math students could have pulled B-or-better grades without remediation, and one in three English students would have done the same in freshman comp.

Scott-Clayton further figures that remediation rates could be dropped by 8 to 12 percent just by exempting strong high school students from placement tests, with no drop in the college's pass-fail rate. At the very least, this would be a cheaper solution that re-tooling the entire US public secondary school system.

Scott-Clayton posits that this system remains in place, like medical screening, because you can regret failing to catch a Bad Thing before it happened, but little regret is involved in pursuing a solution that may not have been necessary. I mean, as long as we've had a dog, our home has not been attacked by Vikings. Maybe we don't need a big floppy chocolate lab to keep the Vikings away, but do we want to take that chance? I think not.

So once again we find that Common Core supporters are trying to sell the Core as a solution that won't work for a problem we don't have. Well, actually, it might work. Since the real problem is that too many incoming freshmen are failing poorly designed standardized placement exams, giving them more high school training taking badly designed standardized tests might indeed fix the problem. Of course, so would throwing the exams out the window and just focusing on actual education. We could prepare them to take college courses instead of preparing them for college placement exams. But we wouldn't want to get too crazy. Vikings, you know.
Posted by Peter Greene at Sunday, September 21, 2014