Teach for America is nothing if not flexible.

In the oft-told tale, TFA was a targeted response to a specific problem-- inner-city schools that could not find enough qualified staff to fill their teacher positions. TFA would create an American teacher version of the Peace Corps, making it cool to put in a couple of years in a classroom before heading on to your real job.

In fact, TFA 2.0 came fairly quickly on the heels of Original Flavor-- logging some time in a classroom as a TFAer was a good stepping stone into the education management industry, a nice supplement to your business degree and a nice resume builder for people headed for government work or the ever-growing field of edubusinesses (charters, etc).

But that Fill in the Classroom Blanks mission was over. In Vox last week, Dana Goldstein was even giving Wendy Kopp credit for helping solve the teachers shortage crisis. You remember the teacher shortage crisis that happened...um... some time?

At any rate, the crisis was averted. But TFA did not announce "Mission Accomplished" and head off. No, instead they morphed into TFA 3.0, which on reflection was probably their least nimble move. The organization was already losing its pretty shine as people realized that, in places like Chicago and New Orleans, TFA wasn't merely filling teaching positions, but shoving the original actually-trained-in-teacher-school occupants of those positions aside.

The message of TFA 3.0 was that they were here to save education. The crisis was no longer a shortage of teachers, but a shortage of teachers who didn't suck. In ways that began to leak regularly as disenchanted recruits dropped out of TFA, the organization was pushing the message that public school teachers had just failed miserably to do their jobs and what was needed was a cadre of the Best and the Brightest to get in there, to rescue the children that nobody but TFA teachers could rescue.

TFA 3.0 was not a winning marketing strategy. The organization looked like a bunch of drive-by do-gooders, at best charity tourists heading uptown for a resume and self-esteem boost, at worst condescending White Man's Burden colonizers. TFA 3.0 was what the Onion famously lampooned in a piece that continues to be passed around on twitter.

TFA read the writing on the wall and started morphing into TFA 4.0.

They would try to be less arrogant. They would entertain the possibility that five weeks of summer camp were not sufficient for prepping inner city teachers. And they would identify a new problem to address-- minority teachers.

Somebody did their homework on this one. This is the year that white students make up less than half the student population nation wide, and yet, the makeup of teaching staffs have headed in the other direction. Some of the stats are mind-boggling-- California has a 73% non-white student population, but teachers are only 29% non-white. And no state comes close to coming close. 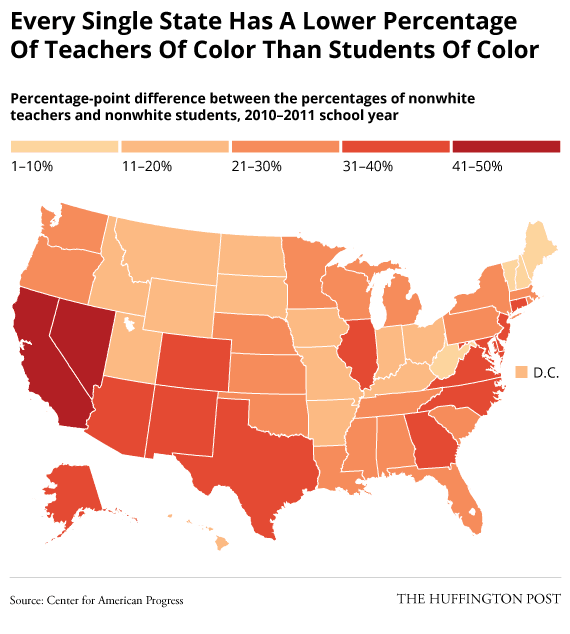 This counts as a real issue. Students ought to see some people who look like them in their school buildings (and the issue extends to gender-- the US teaching force is now overwhelmingly female).

And so TFA 4.0 is now a group devoted to the mission of getting non-white teachers into the classroom. They have promoted the new version of themselves well. In fact, the Southern Poverty Law Center Teaching Tolerance project has hired on a TFA grad to praise the new TFA. You can read the article here, but read the comments as well to see just how spirited the defense of TFA 4.0 gets.

Teacher diversity is not a bad cause to fight for. But it underlines the true nature of TFA. This kind of shifting about is not what a service organization does. If cancer is cured today, the American Cancer Society does not announce tomorrow that they will now lead the fight against obesity. No, this kind of shift is what a business does. If the product stream from our old merchandise starts to dry up, we find a new thing to sell so we can stay in business. If TFA wants to be a business, that's fine. Just don't pretend to be anything else.

The other problem with TFA and its spirited recruitment of non-white people to teach is that it addresses the wrong part of the problem. Minority teachers are actually entering the profession at a higher rate than white teachers-- but they are also leaving at a far higher rate. Nobody really knows why, though guesses include the idea that non-white teachers choose poverty-affected schools and the general chaos, lack of resources, and absence of autonomy to deal with their work all combine to chase them away.

But the big takeaway? Recruitment is not the problem. Retention is.

Unfortunately, retention issues have never been part of TFA's business model, which is centered on the Just A Few Years model of a teaching career. Given their model, TFA would be the absolute last people we would want working on the problem of retaining minority teachers. Emily Chiariello, the Teaching Tolerance TFA hire says this

More recently, TFA has focused on diversity and made deliberate changes to its recruiting techniques. First on their “who we look for” list as characteristic of successful teachers and desirable in applicants is “[a] deep belief in the potential of all kids and a commitment to do whatever it takes to expand opportunities for students, often informed by experience in low-income communities and an understanding of the systemic challenges of poverty and racism.”

But changing recruiting isn't the issue, other than it might help to start tweaking the system so that it's checking for people who will be lifetime teachers instead of two-year temps. And that's teachers-- not educational paper pushers of some sort.

If TFA wants to really make a go of helping to solve this problem, they need to look at preparing and supporting those teachers so that they can build a foundation of success that will carry them into a teaching career. But that would make the distance from TFA 1.0 to TFA 4.0 an awfully huge gap.

The lack of non-white, male teachers in the teaching force is a real issue, and it demands attention. But TFA 4.0 is not the answer.
Posted by Peter Greene at Sunday, September 07, 2014