This old piece of reformster wisdom has been popping up again in the wake of Vergara. 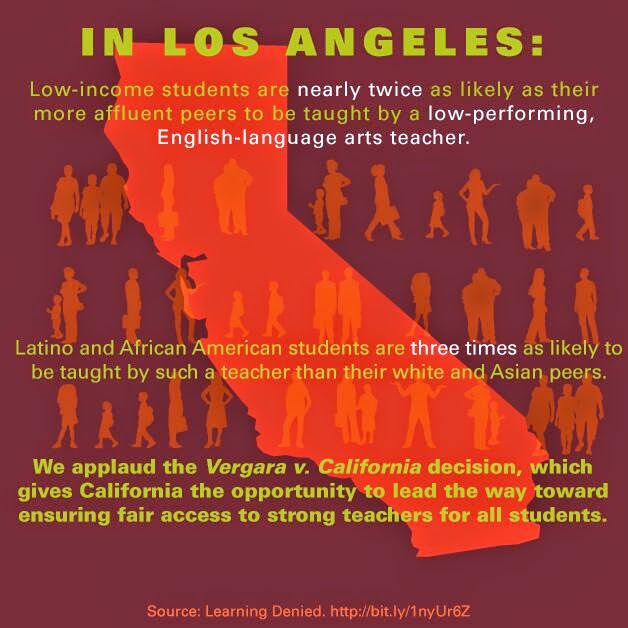 I've explained this before, but let me lay out for you once again how the new interpretation of "ineffective" or "low-performing" guarantees that there will always be an endless supply of ineffective teachers.

The new definition of "ineffective teacher" is "teacher whose students score poorly on test."

Add to that the assumption that a student only scores low on a test because of the student had an ineffective teacher.

You have now created a perfect circular definition. And the beauty of this is that in order to generate the statistics tossed around in the poster above, you don't even have to evaluate teachers!

Look, I don't know what methodology these guys used. It's entirely possible that they inserted the extra step of doing actual teacher evaluations. It doesn't matter. As long as you don't consider the possibility that low-income students do poorly on standardized tests because they go to schools with chaotic administrations, high staff turnover, crumbling facilities, lack of resources, dangerous neighborhoods, and backgrounds that do not fit them for culturally-biased standardized tests-- as long as you don't consider any of that, one thing remains certain--

Low-income students will always be taught by ineffective low-performing teachers.

If you define "bad teacher" as "whoever is standing in front of these low-testing students," it doesn't matter who stands there. Whoever it is, he's ineffective.

You can have people trade places all day-- you will always find roughly the same distribution of slow/fast, wet/dry. good/bad vision.

It is literally--literally-- like drawing an X on a classroom floor and saying, "Any teacher who stands here is an ineffective teacher."

How do reformsters think this approach will affect their stated plan of putting a great teacher in front of those low-income students? How many teachers (or TFA temp bodies) do they plan to run through that meat grinder before they admit that other factors might be in play? And how do they plan to recruit teachers to stand on that big X, to volunteer for an "ineffective" rating?

So am I saying the poverty and chaos and crumbling building and all the rest is an excuse?

I am not. In fact, once we realize it's not an excuse, we can start to see that for those schools, the situation is actually worse than what I've described so far.

Because that allegedly ineffective teacher may be, by virtue of connecting with students and hard work and love and, yes, even grit, may be accomplishing great things in the face of tremendous odds-- just not super-duper standardized test scores.

Because I've talked so far about all these people as if they are easily interchangeable when in fact they are not. A teacher who is awesomely effective in one school setting might be meh in another. That teacher you've rated "ineffective" because of test scores might, in fact, be the most awesomely perfect person for the job. They might have accomplished great things in spite of the chaos and crumbling and underfunding and lack of admin support and resources, and if you had just fixed any of those things, that teacher would have accomplished miracles for you. But instead you want to fire her and replace her with someone who may have no idea how to face the specific challenges of that classroom.

In other words, by focusing on a bogus definition of effectiveness, you actually have no idea of which teachers are great for a particular classroom. It's not just that the reformster definition of effective is unjust and unfair; its innate wrongness will actively thwart any attempts to make anything better. It's almost-- almost-- as if reformsters actually want public schools to fail.
Posted by Peter Greene at Thursday, June 12, 2014
Email ThisBlogThis!Share to TwitterShare to FacebookShare to Pinterest
Labels: equity, Evaluation, poverty, testing