Joel Greenblatt is a hedge fund guy from NYC who, like many hedge fund guys, has it All Figured Out and occasionally writes books to share his insights with rest of us.

Of course, that includes education. It was Greenblatt and fellow Rich Guy John Petry who recruited Eva Moskowitz to take their little charter school, Harlem Success Academy, and turn it into the Success Academy juggernaut. They even came up with some creative means of paying her huge compensation.

Greenblatt's new book of wisdominess resulted in an interview with Michael Cannivet, a "markets" contributor at Forbes.com in which he explains the various topics he writes about ("I thought I could bring a fresh perspective to certain issues I care about"), and one, of course, is education. 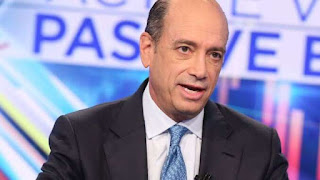 In discussing his book of "common sense," Greenblatt includes some standard bromides, like "The biggest factor that unleashes upward mobility is education" which is a good example of conventional wisdom that isn't actually rooted in facts (I'm no Raj Chetty fan, but he has tackled the issue of mobility pretty effectively). Also, college grads earn more than high school diploma folks "so we've got to do better," and while the interview doesn't get into details, I'm guessing he doesn't mean "we need to unrig the system so that people on the bottom are better paid."

But when it comes to education, there are lots of things that Greenblatt doesn't know. His idea is workaround solutions. He illustrates this with a riddle-- How do you beat Tiger Woods? Don't play him at golf.-- which is a pretty clever idea unless your whole point is to become a better golfer. I mean, this is a glib answer to the question "why is educational reform difficult," but I'm not entirely sure what it's supposed to mean. Education is hard, so do something other than educate students?

But his idea is to do a "roundabout" when encountering certain roadblocks.

For instance, we know certain things do improve educational standards, like some of the best charter schools. I was one of the co-founders of Success Academy run by Eva Moskowitz. The results for the 20,000 kids in that program are phenomenal. As a group, their test scores exceed even the wealthiest districts. That’s a really good sign, because it says that with the right kind of supports, these kids can compete at the highest levels.
Well, no. Greenblatt surely must have read Robert Pondiscio's book about SA, but he may need to read it again, because it shows pretty clearly that one of SA's biggest secrets is creaming for families that are highly motivated and willing to comply with the charter's demands. Also, it's not clear which test scores he's referring to, because the Academy's students do well on the test they're prepped for, but tend to bomb all other exams. The few students who finally emerge from the heavy-attrition program actually haven't competed very well at the highest levels at all. Success Academy has accomplished some things with some students, but it's not the simple picture that Greenblatt draws here.
But Greenblatt is going on to note that charter schools serve a limited number of students, and the public schools have so much money, "it creates a maze of entrenched interests." That old argument. So Greenblatt wants to "an end-around the current system" and his idea is alternative certification.
He seems to mean some combo of competency based education and microcredentials, where you get little badges indicating you've proven you possess Skill X, having picked Skill X from a list of things that corporations want in hirees. The goal, as with many such systems, is to replace the public education system with a system for manufacturing worker bees and meat widgets made to corporate specs:
The best way to kickstart alternative certification would be getting top companies onboard. Major firms like JPMorgan, Amazon, and Google could help create more opportunities for high paying jobs by simply making public new hiring criteria they will use in lieu of a college degree to screen candidates for high paying jobs. They can come up with whatever certificates, courses or tests make the most sense for them and the positions they aim to fill.
And if you think I'm excessively snarky with my "manufacture meat widgets to specs" description, here's how Greenblatt responds to the question of how much this would cost government:
It wouldn’t cost the Federal government anything, because once a “buyer” is established for the people taking the certification tests or for those passing certain courses or receiving specified certificates, a natural ecosystem would begin to grow. Things like tutoring services and online resources would emerge and the network effects would snowball.
The free market would make it work. Of course, just like Success Academy, it would leave behind everybody who wasn't a good fit for this meat widget marketplace. But he's sure it would work, just like in that book by Clay Christensen, the disruptive innovation guy.
There's more about other topics in a similar hedge fundie vein (social security should be replaced with individual accounts). There may be more subtlety and nuance to his education ideas, but he doesn't need my money and I don't want his book. There needs to be some sort of special name for Rich Guy Dunning-Kruger, where someone doesn't know what he doesn't know, doesn't feel the need to learn, and still gets to throw money around and write books like he's an expert. Greenblatt's a special case because his connection to Success Academy has given him the chance to learn a lot of useful things about education and apparently he just hasn't. That's unfortunate, particularly if he decides to launch another project.
Posted by Peter Greene at Saturday, November 21, 2020