Over at Red State, a site that leans just a bit to the right with articles like "Milennials Get Classes on Basic Adult Skills, Still Act Like Children," (but not "So Get Off My Lawn),  Joe Cunningham is impatient. "It's Past Time We Tackled Education Reform" he insists. 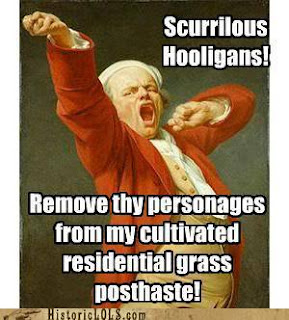 He notes that despite early controversies, Betsy DeVos's education department really hasn't done much and "aside from her rolling back Title IX memoranda for colleges going after sexual assault, there has been little to celebrate." Because the only thing worse than sexual assault is universities trying to do something about sexual assault. Sigh.

But like many DeVos backers, Cunningham is sad. "Frankly, it appears as though the faith we had in DeVos to be a driving force behind education reform was for naught." Dude, I wouldn't say it was so much ":for naught" as it was "based on naught." What gave you that faith? Her complete lack of experience in running any sort of large organization? Or the way that she kept indicating that she thought the department should be doing pretty much nothing?

He notes that Congress hasn't done much about education, either, which is also unsurprising because A) Congress doesn't do much about anything and B) Congress mostly ever discusses education in vague platitudes, and the last twenty years have made even that route a risky one. Better to just not talk about it at all. It is, he notes, "is the topic of conversation that always gets left for when there seems to be nothing else to talk about," which is a pretty good line. Cunningham says he wants to have that conversation; I don't know that he really does.

We should be having the conversations. We should be working to improve the education system, public and private, so that we provide our children with the best possible education we can offer them.

That means we have to talk about private school vouchers, school choice, public school funding, free pre-Kindergarten and college, and every other issue in between.

See, he kind of skipped over the whole conversation about what improving the education system would actually look like. And his "have to" list? We really don't have to talk about vouchers, but we really have to talk about things a little more specific. DeVos supporters thought we would talk more about choice, and as evidence of the alleged popularity of choice, he cites some "research" by American Federation for Children, a dark money group founded by DeVos. Is it some kind of political tautology when a politician creates an advocacy group to push that politician in the direction they already want to go?

Course, he says, it doesn't have to be school choice. It could be any old thing. "What kinds of reform can we push that really only require local and state input or are teacher-centric?" Stem, maybe? That we do somehow?

I can help him out a little on this. He might want to look into a reform program that I like to call "Shut Up, Sit Down, and Let Teachers Do Their Jobs." It's local, it's cheap. and it's very teacher-centric.

But Cunningham is just sort of flailing now. People should care about this stuff. After all, they care about child separation, because children. Well, education, too!

Cunningham identifies himself as a conservative, parent and educator-- I have no idea how true any of those are. But plenty of conservatives saw DeVos as an antidote to a department that was too "proactive," a quality Cunningham says he hopes for. He's also hopeful about the proposed Laborducation merger, even though some conservatives aren't at all. And despite her pledge to be inactive in DC, DeVos has started to show some signs of the same meddling that conservatives hated in Arne Duncan.

Cunningham wants the department to be "more proactive in seeking and implementing good reforms that benefit our students, not just one type of school over another." First, that flies in the face of most charter school programs, which privilege charter schools over public schools. Second, he sounds like some "let's get help from DC" Democrat. Third-- and this is really important-- what exactly does he think could be done from Washington? Because he has one other correct point in his piece-- going back twenty years, we have repeatedly implemented bad, even destructive, education policies because a bunch of amateurs were in DC jumping up and down and yelling, "We have to do something RIGHT NOW!"

We don't need any more impatient reformsters-- not political ones, not business-oriented ones, not philanthro-capitalist ones. The educational system includes millions-- literally millions-- of trained, experienced professionals who have committed their entire lives to making US education better. Betsy DeVos is not one of those people. So sit down, drink some lemonade, and catch your breath. If you let the professionals work, we'll even promise to get off your lawn.