Michigan, having gutted its public school system and repeatedly mistreated its teachers, is reaping the consequences in the form of a teacher shortage, which is of course not an actual teacher shortage, but rather a failure of the system to make the job attractive enough to draw people to it.

One legislator had a bright idea about how to fix this-- get rid of one particular requirement:

The bill, approved unanimously by the House Education Reform Committee, eliminates the requirement that new teachers pass a basic skills examination - currently the SAT - before earning a teaching certificate. 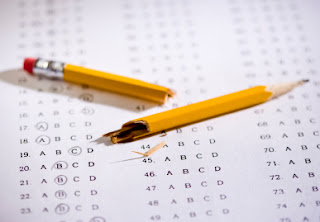 There a couple of things to unpack here. One is the notion that the SAT can somehow be used as a "basic skills examination." How does the SAT in any way shape or form resemble such a thing? It's moments like this when I wish the College Board was run by people who were so ethical that they said things like, "No, you can't use the SAT for an exit exam or a basic skills examination because it was never designed for such things. Therefor, we won't give you permission to do it." Instead, we've got the College Board of this world which says things more along the lines of, "Super! Just make the check out to 'College Board' and you can use the SAT to test first grade reading comprehension if you want to!"

But what also jumps out of the coverage of the bill is one particular piece of language:

Sen. Marty Knollenberg, who sponsored the legislation, said requiring prospective teachers to pass the SAT is a burdensome requirement.

Pass the SAT? What does that even mean? The SAT gives you a score, which as I told my students every year, is neither "good" nor "bad" until the college you're applying to says so. I talk to someone on line with ties to the testing and data biz and she absolutely hates it when people talk about passing or failing test. And yet, here we are, demonstrating once again that civilians (even elected ones) don't understand that tests are produced for very specific purposes and can't just be swapped to whatever purpose you like as if all tests are fundamentally the same. And instead of seeing some rich source of nuanced data that can be carefully decoded for a wealth of information, these citizens just see a thing that you either pass or fail. No more nuance or richness than a light switch.

And these are the people who legislate how tests must be used and what rewards and punishments will be doled out because of them. Yes, one of the biggest problems with modern ed reform is that it's amateur hour in education. Knowing what the heck you're talking about-- that's the test that people in power keep failing.
Posted by Peter Greene at Friday, June 15, 2018