So here's the story. A Secretary of Education becomes frustrated with Congress because the august body of legislators can't get its act together to reauthorize/rewrite a major piece of law that governs an entire sector of education. So the frustrated secretary digs into their bag of tricks and decides, "Hey, by using my control of certain regulations, I can basically implement the rules that Congress won't." 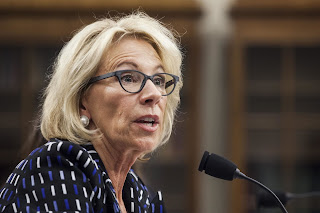 This, of course, is the Arne Duncan story. Congress wouldn't get off its collective keister to fix up the Elementary and Secondary Education Act known, at the time, as No Child Left Behind (and several other less friendly names). So Duncan leveraged the penalties that states faced under NCLB, held some money hostage, and used his agency's regulatory powers to legislate new rules for ESEA, an act that, ironically, united Congress in a bipartisan desire to spank Duncan and that desire, in turn, led to the reauthorized ESEA/NCLB, now known as ESSA.

Many conservatives, including the DeVosian ones, were pretty angry at Duncan for trying to legislate from a department in the executive branch, but now they face a conundrum.

Because that story is no longer just Arne Duncan's story. It's now the story of Betsy DeVos.

The top Republican on the Senate Education Committee effectively killed on Thursday all hope for a highly anticipated overhaul this year of the law governing the nation’s 4,000 colleges and universities, paving the way for Education Secretary Betsy DeVos to wield her deregulatory power

Lamar Alexander blames the Democrats. Patty Murry says, no, the Dems want to "reauthoirize the Higher Education Act as soon as possible."

Virginia Foxx (let's not get me started on Foxx right now) has a nifty version that gives for-profits and religious institutions free rein, but even though the bill has passed the House Education Committee, it will never survive the Senate. The GOP only has a one-vote lead, so a pandering-to-the-base bill won't pass. See? Elections do matter.

Since Congress can't get their act together, DeVos is simply going to go Full Duncan and obtain the results she wants through regulatory power.

She has announced a sweeping regulatory agenda that seeks revisions to key academic measurements in the existing law, as well as changes to eligibility requirements for nontraditional programs like “competency-based education” to obtain more federal financial aid. Competency-based education makes the acquisition of specific skills — not just test-taking and attendance — key graduation requirements.

The department has also proposed to review what defines “regular and substantive interaction” between faculty members and students in programs where students are not physically present in classrooms, and to review the “credit hour,” which is used to measure progress toward completing a college degree. Colleges have complained that the credit-hour rule is too prescriptive.

DeVos will also delay by two years the rule that says online programs need approval from the states in which they enroll students.

This is all an extension of what DeVos has been doing and has been saying she will do. What's novel is that she has decided to use Duncan-style tools to get the job done. This has been one of the Big DeVos Questions since day one-- would she hold true to her promise to keep USED's hands off the levers, or would she be unable to resist the temptation to use the power she has to get the results she wants.

Now we know the answer.

Arne Duncan was wrong when he tried to legislate by way of department regulations, and lots of people called him on it. Now let's see if they'll do the same for Betsy.
Posted by Peter Greene at Friday, June 01, 2018
Email ThisBlogThis!Share to TwitterShare to FacebookShare to Pinterest