NV: Their Money and Their Mouths

So let's say you're home to the fifth largest school district in the country. Let's say your teacher shortages are legendary. Let's say they're so bad that you hire recruiters and mount a national ad campaign. Let's say your state has implemented the loosest voucheriest funding system in the country so that your funding is, you'll pardon the expression, a crapshoot. Let's say your legislators are in a legal battle with your school board because your legislators want to slap your schools with a "reorganization" plan that might me mighty pricey. Let's say that your school funding is kind of a nightmare that shells out less than $6K per student and depends on revenue that's tied to tourist business via a hotel room tax. Let's say that you have managed to out-Mississippi Mississippi so that you now command the bottom ranking spot for education in the USA.

Let's say all that. What do you do?

Did you say, "Why, build the world's most expensive sports stadium?" 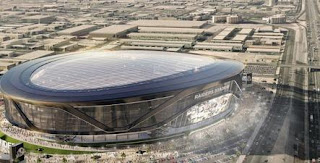 If you did, you're a winner-- probably the only one in this sad tale.

Las Vegas made what is being called "the worst stadium deal" ever to lure the Oakland Raiders to Sin City. The stadium is reportedly projected to cost $1.9 billion. Billion. With a B.

While come of that money is coming from rich people who have presumably run out of ways to waste money and the Bank of America, who have-- well, I can't figure out what's in it for them. But the city itself is kicking in $750 million. $750 million. Some or most of that will come from an increased hotel tax applied to a new influx of almost half a million new tourists who will presumably be flocking to Las Vegas to see the Oakland Raiders, a team that people won't walk across Oakland to watch now. Fans of the deal insist that the combination of the Raiders and Las Vegas will be unstoppable ("Pittsburgh isn't Las Vegas," says one article, and thank God they're correct).

And if the imaginary tourists don't swell the tax coffers, who else is dipping out of that pool of money? Who else might get squeezed aside? Who, did you say? Yes-- the schools.

Opportunity cost is a way to look at an expenditure. You see a scarf and it looks so cool and it's only ten bucks, so it's a great deal. But the opportunity cost angle is to ask, "Well, what else could I do with the ten bucks if I didn't spend it on a scarf?" If the answers are things like "Food for my children" or "Outstanding parking fines," you should probably pass on the scarf. At the very least, buying the scarf will make a statement about what you really value.

So, if we look around Las Vegas, what's our opportunity cost. Is there something else that we could do with $750 million? Anything? Anything at all?

Perhaps the stadium will benefit some other teams. But the actual research on stadiums done by actual economists (working, for a change, in their actual area of expertise) is that stadiums are not investments:

Las Vegas has decided to put both its money and its mouth somewhere other than its schools. Mississippi has a chance to stay out of the very lowest part of the US education basement only because Nevada is intent on going down to the basement and digging a hole.