How Not To Teach Writing

Imagine how crazy it would be.

An English teacher stands in front of a class and explains, "For every thought you have about the prompt, there is only one correct sentence that can use to express that thought. I'll be grading your essays based on how many of the correct sentences you use."

Nobody teaches writing that way. Nobody says, "Okay, if you have an insight about Jake's injury in The Sun Also Rises, there is on correct sentence for expressing that thought" or "On today's essay about parenting, I'll be looking for seven particular correct sentences that should be used to express these thoughts." 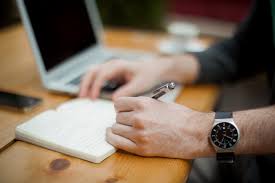 Certainly nobody approaches the use of words in real life in this way. Nobody says, "No, you can't be serious about this job because you didn't even try to say the right sentence," or "No, if you really loved me, you would have said the correct sentence for expressing it."

No, the entire history of human expression, human literature, human song-- it's about finding new and interesting and surprising ways to say what we have to say. It's about finding ways to express a thought that are perfectly suited to that particular person and time and place and circumstances. We are moved, touched, excited, and enlightened by those who can string words together in completely different and yet completely appropriate ways.

Certainly some of these verbal inventions are better than others. Shakespeare's plays are echoes and imitations of other versions of the same stories, and yet four centuries later his Hamlet and his Romero and Juliet endure because, although he was saying what many other playwrights were saying, he said it better. We admire (at least we should) Shakespeare not just for what he did with the language, but for his rip-roaring robust rearrangement of the language, his willingness to take his tools and hammer them into new shapes that served his needs perfectly. Shakespeare did not get to be Shakespeare by imitating everyone else. He found his own way, and found things that were so much better.

But there is a huge difference between "better" and "the one right way." Shrimp salad with a light dressing is better-- healthier-- than a thick steak with french fries. But it does not follow that I should eat shrimp salad for every single meal. We should not all be wearing exactly the same clothes, driving in exactly the same car, and living in houses with exactly the same floor plans while we listen to bands that sound the same play identical recordings of just a few songs.

This is all obvious-- as obvious as not teaching students to write by demanding they spit out the One Correct Sentence for whatever thought they're having.

And yet  much of writing instruction and assessment assumes a One Correct Sentence model. Error-centered instruction, where we focus instruction on all the mistakes we're supposed to root out and avoid, seems to assume that if we slice away all the Bad Things, we'll be left with the perfect sentence for our thought, and not just some sad, filleted dishrag of a sentence.

This is why, frankly, so many teachers either avoid teaching writing or just do it badly-- it cannot be reduced to a formula and it does not involve a single correct answer for each problem, so it's hard to teach and hard to assess. Even the giants of literature cannot agree on what would be a good way to express a particular thought. Mark Twain loathed James Fenimore Cooper's classic American novels, Faulkner thought Twain a hack, and some of the greatest literary insults have been delivered author-on-author:

On Jack Kerouac: “His rhythms are erratic, his sense of character is nil, and he is as pretentious as a rich whore, sentimental as a lollypop.” — Norman Mailer

On Mark Twain: “[A] hack writer who would not have been considered fourth rate in Europe, who tricked out a few of the old proven ‘sure fire’ literary skeletons with sufficient local color to intrigue the superficial and the lazy.” — William Faulkner

On Hemmingway: “I read him for the first time in the early Forties, something about bells, balls and bulls, and loathed it.” — Vladimir Nabokov

On Jane Austen: “I am at a loss to understand why people hold Miss Austen’s novels at so high a rate, which seem to me vulgar in tone, sterile in artistic invention, imprisoned in their wretched conventions of English society, without genius, wit, or knowledge of the world. Never was life so pinched and narrow. The one problem in the mind of the writer … is marriageableness.” — Ralph Waldo Emerson

More than necessary to make my point, but as a genre, author-on-author insults are kind of fun.

The giants of the writing field cannot agree on with any narrow clarity what constitutes good writing. The closer we get to nailing that elusive beast down in one single, specific spot, the more likely we are to kill it dead. Pinning down writing to one specific answer is like deciding that dogs look best in one pose, so you have yours stuffed and mounted in just like that. What you have is not a loving, living animal, but a dead thing trapped in a sad, inadequate simulation of life.

What we have are choices. In seeing choices, we are often victims of success, because a well-written sentence or essay or story or even just a phrase leaves the reader feeling, "Well, of course. I can't imagine any other way to say it." But there were and are other ways to say it, and some of them, in other circumstances or in the hands of another writer or even just in place of what we see-- those could have been great choices too.

There are always choices.What we need to teach our students is how to see the choices, and then how to decide which choice best serves her purposes, which choice best fits her own voice, what choice best achieves her goals. Instead of looking for the One Right Answer, she needs to look for Her Right Answer, and we need to help her learn to be comfortable with the fact that there are many Perfectly Good Answers available (and she may need to stop stressing about trying to find the One). She needs to find her own voice, her own path, her own way. And there's just no way to standardized that, nor any value in trying.