Burn And Churn McModel Is Failing

To launch the fast food industry, owners and operators refined and adapted an industrial model, with every kitchen an assembly and every employee an easily-replaced meat widget, performing unskilled labor on a job that was employee proof. In the last couple of decades, some education reformsters have tried to adapt that McModel to education, creating teacher-proof content delivery systems that would allow schools to be staffed by easily and swiftly replaced low-cost meat widgets (if you want to talk about the industrial model in education, that's where it really is).

But we've had the McModel of churning turnover in place for it decades, and it turns out there are problems with it. 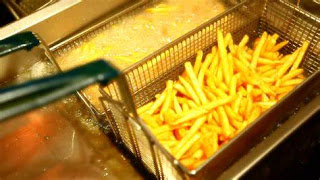 The headline of this piece hollers that Panera has worker turnover of 100%. But read the article and you discover that 100% employee turnover is actually pretty good in the industry. The industry standard is 130%, and some places run much higher. (That's mathematically possible if you lose workers and their replacements within one year). And--

The turnover-proof model, considered essentially cost-free, has been in place for years, but now burn-and-churn is showing signs of trouble. Batt says that some chains are starting to figure out the costs of turnover.

The actual costs. Batt says the rule of thumb is the time it takes a manager to hire, the time it takes to train, and the time it takes to become good at the job-- during that time, half the pay is considered a wash. And that's before we start talking about the disruption to the team and the organization. According to one authority, Burger King figures it costs about $600 per employees. Batt's survey suggests more like $1,600. The National Restaurant Association says about $2,000. The industry research firm TDn2K says $2,100 to $2,800.

You've probably already seen one of the industry responses-- automation, from the kiosks at McDonalds to the do-it-yourself pads on the table at fast casual spots. Meat widgets can be replaced by software that never quits and doesn't need to be paid.

Does any of this sound familiar?

Beyond robots, what other views of the problem and its solutions are there?

Well, some experts observe that fast food work has become a job that nobody wants, and some think no improvement of pay, benefits, training or culture will fix that. And Abraham Pizam, dean of the Rosen College of Hospitality Management at the University of Central Florida has a statement that would look good on a Teach for America t-shirt-- "No one who thinks of a job as temporary is motivated." But yeah-- when a job becomes hugely unattractive, finding people who will work it is hard.

Jordan Boesch actually started a company, 7Shifts, to help restaurants manage and plug holes in their work schedules. He has a couple of interesting observations:

“I don’t think training can be a game-changer,” Boesch of 7Shifts said. “The bigger determining factor for someone to stay with you is if they see a future there.”

Boesch said the big food chains are overly confident: They think they are better at training than they actually are, and as a result, they recruit and hire the wrong people. Citing Jim Sullivan, a well-known restaurant consultant, Boesch said hiring is 90% of the equation and training only 10%. “There is no way to develop the wrong person.”

In other words, the model is fundamentally wrong-- you can't just plug any meat widget into the job. You need someone who has the skills and tools to do it well, and then you need to provide them with an environment that helps them thrive. For employees who deal with customers, a toxic culture that doesn't care about people will be a huge turnoff, regardless of money. All the training in the world will not make them happy in a toxic work environment. So the whole "We just need to give teachers better training" plan might have a flaw.

Some experts have doubts about the all-robot fast food joint-- that human beings still want even the most basic contact with human beings when buying food. Nobody in the article mentioned the other elephant in the room-- computer-driven tools fail a fair amount of the time. Both points are worth noting when contemplating personalized [sic] algorithm driven computerized learning.

One other interesting point-- some experts suggest that a rise in minimum wage will motivate employers to hire better and train better to better protect their meat widget investment.

At any rate, the McModel that some Reformsters have been pursuing has turned out to be unsustainable. We already knew that it was incompatible with quality, but it turns out to cost a lot more than promised. As far as the bar has been lowered for restaurant work skills requirements, there are still plenty of people who can't clear it. There aren't enough people to create an endless supply of meat widgets, and that supply is further reduced because in attempting to degrade the job as much as possible-- thereby making it all the less attractive. Which in turn requires hiring people who aren't really qualified, which further degrades the workplace culture, because who really wants to work side by side with a bunch of folks who can't really do the work, and so on. And that's before we even start to talk about the impossibility of reducing the work of teaching to the point that any unskilled, barely trained meat widget can do it.

The McJob model isn't even really working for the people who McCreated it. One more reason among many for education reformsters to stop pursuing it as an ideal.
Posted by Peter Greene at Friday, August 30, 2019
Email ThisBlogThis!Share to TwitterShare to FacebookShare to Pinterest