Kids these days. They just can't be trusted to do anything on their own. We've done our best to structure the hell out of their day, making sure that every answer, every move, every activity is built around a specific uniform required response on their part. By controlling every classroom moment, right down to what books they're allowed to read and what they're supposed to say (stick to the script, kid), we've managed to suck all of that damaging fun out of school.

But what about recess? Granted, some schools have solved the problem by simply getting rid of recess, but what about schools where students just go out there are and run around and interact and play games like Tag or Jumprope or Climbing Dirt or How Fast Can I Run With My Tongue Hanging out. Is there some way that we could step in to make recess less fun and more in keeping with the goal of Making Kids Do What We Want Them To?

Turns out there is. Meet the recess consultants.

Playground consultation has hit the internet lately because of this story from Minnesota in the Star-Tribune. Two schools in Edina are trying out the program from Playworks that replaces all that sloppy, disorderly free play with structured activities and offerings like the "Game of the Week." Not everyone was exactly digging the new structured "adult-facilitated" activity time.

On a day last week, a kindergartner said he wanted to play basketball. A recess coach explained that wasn’t a choice at the time; he decided to play another game.

Playworks can be hired for varying levels of meddling with children's playtime, from a "coach" who "operates" recess to an occasional drop-in meddling coordinator down to training staff how to meddle with recess on their own.

The Star-Tribune piece was followed up by a response, direct from the PR Department of Shut Up You're Not Really Helping. Here are some of the things Shauna McDonald says in support of Playworks' program:

Playworks is the leading nonprofit in our community leveraging the power of play to transform children’s social and emotional health.

Playworks has found that the best way to get all kids in a game or in a variety of games is to create an environment where all participants share the same language, vocabulary, understanding and strategies that they can use to solve conflicts on their own.

It’s about helping schools create an environment where every child has a supported choice and is empowered to be a contributing member of their community.

And I actually find this one the creepiest:

If a child is happiest at recess while engaging in imaginative or free play, this play is encouraged.

It just conjures up visions of the recess consultant asking a six year old to stop and consider, "Is this running circles really making you happy, Chris? Could you please rate your happiness on a scale from one to ten?"

Playworks wants you to know that their program has been studied by Stanford and Mathematica, and those studies have determined that students learn more, have fewer discipline problems, less bullying and "a greater perception of safety." And there are plenty of schools that say they are happy with how the recess consultants have brought order out of chaos and helped with bullying and inclusion issues.

Maybe I'm just naive. After all, I'm a high school teacher, not an elementary one (I'm not remotely tough enough). I know that bullying and getting left out can make recess suck. But am I supposed to believe that there are elementary staffs out there that don't know how to handle those issues without turning recess into one more adult-controlled part of a kid's day?

Sure, no kid should dread recess because he'll spend it all alone or be the target of bullying. And some of what the Playworks site describes sounds suspiciously like a plain old phys ed class. I'm just not sure this sort of exercise in Borgian assimilation into the adult-facilitated hive mind is a good answer. The Playworks website is loaded with this sort of language:

At Playworks, our goal is to create an environment where safe, healthy play is accessible to everyone. To achieve this, we train adults to create fun, safe, and inclusive playgrounds through games and positive group management techniques. At a Playworks recess, children enjoy fun and interesting games playing alongside engaging adult role models and often student leaders.

That's from a blog post in which Playworks insists that they aren't structuring some sort of robotic playground hell. Just a place where adults call the shots, design the activities, make sure the kids don't play on their own, and talk about "positive group management techniques" like that's a good thing. Where do these people come from? At which college does one get a degree in playground consultancy, and do they also offer degrees in walking in the hall supervision and note-writing oversight?

Maybe we just need helmet cams for every kid, so that monitors can watch the child's every move and make sure nothing goes wrong. "Alert! Alert! Chris is about to pet an unauthorized puppy!" "Call in the napkin consultants-- Pat just drank from the water fountain and left some water dribbling chinward"


At this point I almost looked up some links to research showing the free play is good, but no-- it just depresses me to imagine that we've reached the point where we have to make academic and research-based arguments to support the notion of letting children play, on their own, doing whatever-the-hell they want, free of any adult intervention except when they are veering toward Really Wrong Stuff. Granted, this is not just a school problem-- parents increasingly schedule their children into adult-directed sports and activities for a zillion hours every week. Is it any wonder that by the time they get to me and I ask them to do things like pick an essay topic, develop their own argument, and write about it in their own voices, that some of my students look at me like they've been asked to sing a few choruses in "Puttin on the Ritz" in Sanskirit?

And just in case you think this is some strange Minnesota thing, here's a map of where Playworks has already landed: 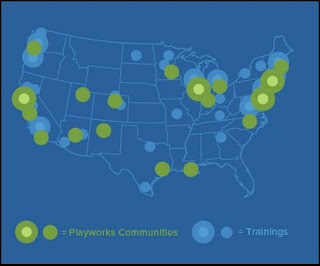 So there may be one near you. In the meantime, you may want to set your school up with a recess consultant, as well as a lunch-eating consultant, a nap consultant, and a shoe-tying consultant. If we want to grow the leaders and independent thinkers of tomorrow, we'd better start supervising their every waking moment today.
Posted by Peter Greene at Wednesday, October 07, 2015
Email ThisBlogThis!Share to TwitterShare to FacebookShare to Pinterest
Labels: Minnesota