It's hard to read about the history of education and then in the same mindset say, "yay, I want to be a teacher!" Figuring this all out.
— Mel Katz (@mel_katzz) September 6, 2015


Man, it just sucks to be a young person contemplating teaching these days. It's not just that so much of the news about the profession, or that states are crying about shortages while districts say they're not hiring, or that so much security is being stripped, or that so many layers of crap have been dropped on the classroom, or that poverty has become so widespread in the nation, or that looking closely at our institutions reveals embedded layers of racism and classism, or that education has so few attackers and so few supporters, or even that so many old farts will tell you, "For the love of God, young'uns-- don't go into teaching! It's a terrible idea!" 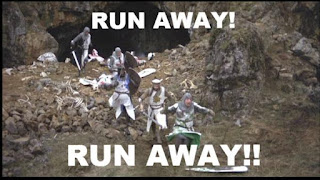 First, I want to apologize on behalf of Old Farts everywhere. We should really knock it off with delivering Discouraging Words, which are at best annoying and at worst disrespectful, as if Kids These Days are incapable of making their own career choices.

Second, I want to be clear that I teach in a rural, small town setting where we are not very wealthy, but don't have the heartbreaking level of poverty found in some parts of the country. There are hundreds of thousands of teachers who have a much harder job than mine.

There are many reasons to stay away from classrooms these days. Lack of resources, but an excess of blame. Low levels of pay, but high levels of disrespect. Large challenges to overcome, but tiny tools with which to tackle them. Many people who want to tell you what to do, but few people who want to actually help you do it. And when you start to peel back the educational onion, layers of institutionalized racism, classism, and decisions driven by politics, greed, power-- everything except the needs of the children.

So why step into a classroom? I've taken up a few miles of bloggy bandwidth considering all of these questions, but I think the bottom line is simple--

Teachers step into schools for the same reason fire fighters run into burning buildings-- because that's where you find the people who need the help.

If you want to help young humans grow and strengthen and learn and build themselves up into their best, most human selves, then you have to go into the school, into the classroom. Not that there aren't other ways and places to help, but if you want to help young humans learn to read and write and think and understand and build a greater vision of themselves, then a school is where it's at.

That school might not be in the best of shape. It may not be run by the best of leaders. It probably isn't fully funded. It may be twisted out of shape by the flames of testing and the heat of political games. And the people who are supposed to be helping you, supporting you, may be throwing flaming molotov cocktails at your head.

But all of that is background noise. The only question that matters is, "Do you want to teach students, and can you do it here?"

The answer to the second part might be no. Your tank might be empty, or the obstacles at your particular school might be too great. I'm not going to judge. You can only do what you can do.

But there have always been obstacles in the culture and problems baked into the system. I'm not saying don't fight them-- I'm saying someone who waits for perfectly calm educational seas to set sail will never get out of the harbor.

So we go into school because that's where we find the people who need us. That's where we can do the work. The obstacles aren't what keep us from doing the work-- they're the reason the work needs to be done in the first place. Let's go teach.