In his excellent look at the value of teacher coaches, Peter DeWitt drops this line with an important embedded assumption:

In order for coaching to work properly, the school has to have a climate conducive to learning, which means that there needs to be a balance between risk-taking and rule following.

A climate conducive to learning has to have a balance between risk-taking and rule-following. That notion really resonates with me, because I see teaching as an ongoing balancing act. And some of that balance is between risk and rules.

I spend a lot of time railing against rules and restrictions and oppressive demands for one-size-fits-all conformity, but my first published education rant was a letter to the NCTE (National Council of Teachers of English) journal complaining about the loose foolishness of whole language approaches. I'm a lot less tightly wound than when I was younger, but I really don't have much trouble understanding the point of view of conservative commenters on education.

Larry Cuban captures the age-old tension in a recent post.

Two traditions of teaching have competed with one another for millennia.  Each has had a grab-bag of names over the centuries: conservative vs. liberal, hard vs. soft pedagogy, subject-centered vs. child-centered, traditional vs. progressive, teacher-centered vs. student-centered, mimetic vs. transformational.

Each tradition has its own goals (transmit knowledge to next generation vs. helping children grow into full human beings);  practices (teacher-centered vs. student-centered); and desired outcomes (knowledgeable and skilled adults ready to enter the labor market and society versus an outcome of moral and civic engaged adults who use their knowledge and skills to help themselves and their communities). No evidence, then or now, has confirmed advocates’ claims for either tradition. These are choices anchored in beliefs.

Cuban goes on to suggest that the best teachers use a blend of both, but while I don't disagree with that notion, I don't see an equivalency between the two schools. The mimetic tradition is a very useful tool in achieving transformational teaching, but ultimately they are no more equivalent than a hammer and a house built with it.

The mimetic tradition is all about rules, about content set in concrete. By itself it is lifeless and inert. This is the sort of thing that Emerson railed against in "Self-Reliance"--  The ultimate traditionalist mimetic subject is Latin, a language dead and fossilized. I occasionally talk to someone who studied it and found the experience wonderful-- and invariably they are people who took the dead, dry stuff and made it transformational through their own use of it.

And yet there can be no transformation of a student into someone more fully human and completely themselves based simply on air, any more than you can build a blazing fire without anything to burn.Without the glass, the glass is neither half empty or half full-- it's just a puddle. Luke shuts down his targeting computer, but not his X-wing fighter. When I'm playing a jazz solo, I can play whatever I feel or want, but it lives or dies against the background of the chord structure. 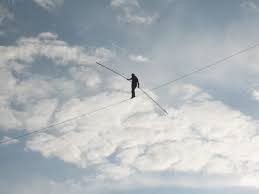 Balancing rules and risk remains a challenge. The reformster program is all about rules-- rules piled on rules governed by rules enforced by more rules, based on a belief that we can just rulify education into a state of perfection. But perfection, like balance, is not a state-- it's a process.

Education is a balancing act performed by a teacher on a unicycle juggling twenty bowling balls with her hands while holding a long balance pole across her knees while a pack of squirrels chase each other back and forth across the pole while a flock of geese keeps flying through them all. Reformsters and other rules fans think the way to fix this system is to weld the parts of the unicycle together, put the teacher in  straightjacket, and crazy-glue the pole to her knees. And if it doesn't seem to work, they think they just haven't done the welding and gluing in the right position-- but their premise is wrong.

The dynamic tension between rules and risk cannot be "settled," and more than we can devise a one-size-fits-all formula for transforming children into more fully realized grown humans. It's an ongoing process, and endless act of balance best managed by the person there on the high wire and not the clowns down on the ground.
Posted by Peter Greene at Thursday, February 11, 2016