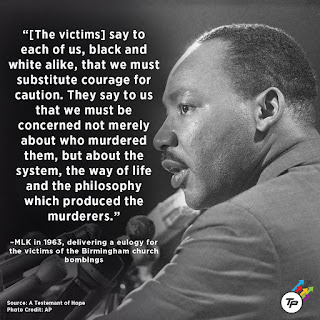 When somebody does something awful, my most immediate response is to wonder what was going on in their head that made that action seem okay. See, I believe that the vast majority of people try to do what they believe is right, what is in line with the rules for how the world is supposed to work. Even the most horrible acts are somehow, in their perpetrator's mind, okay.

Sometimes it's because that person's mind really is broken. When someone starts taking orders from the voice of Satan speaking through a dog, his perception of reality is so twisted that it's hard to imagine how he ended up in that dark and distorted place where it's okay to kill people you don't even know. But Son of Sam type killers are not the norm.

I don't think I believe in monsters. At least, I don't believe that monsters are somehow fundamentally different from the rest of the non-monstrous population. I think monsters are people who have found a way to see doing something monstrous as okay. And while I believe that each of us is ultimately responsible for our own choices, I also believe that as a culture, we grease the downward path to certain dark conclusions.

Humans are hardwired against killing other humans, and so the first step toward killing someone else is to see that person as not-a-person, not really human. A person, of course, is someone like me, someone who thinks, feels, reacts, believes as I do. Not-persons act out of some other set of impulses and motivations that I cannot comprehend.

Our culture is depressingly adept at labeling not-persons. Our entertainment narratives repeatedly hammer home that persons are white guys, and women and not-white guys are persons to the extent that they come close to the white guy. Our politics have become heavily infected with the idea of Betters and Lessers, and the notion that poverty is simply proof that some persons are less person-like, less possessed of the qualities that Real Persons have for rising above. "If I had been born into poverty," goes the formulation, "I would have just worked hard and pulled myself out of it. The way Those People are acting just goes to show that they lack some of the basic qualities of Personhood."

But when we add the view of not-person to a sense of grievance, bad stuff happens.

Slate's Jamelle Bouie has a piece about the history of rape accusations as justification for racist violence, both inside and outside the halls of justice. But while grievance can attach itself to the belief that there is some clear and present threat, it can also attach itself to the idea that I'm being kept form getting what I deserve.

Murder by Angry White Guy has its own set of common characteristics. And it's worse than you think, because even as various outlets are putting up galleries of White Guy Murderers from the past few decades, there are I-don't-even-want-to-think-about-how-many more.

You've probably don't recognize the name George Sodini, but in 2009, he walked into an LA Fitness in a Pittsburgh neighborhood and killed three women, including one of my former students. Jody was in my honors class as a junior. She was a standout basketball player, smart, and very personable. She could have been a standard-issue high school Queen Bee, but she had a warmth and kindness that most people responded to. She played ball in college, became first a physical therapist, then a medical equipment saleswoman. She was 37 when Sodini ended her life.

Sodini killed himself that same morning. Afterwards, his online journal was discovered, and it was the same old damn shit. On Obama's election, he wrote "Amerika has chosen The Black Man" and bemoaned how "dem young white hoez dig da bruthrz." He complained how he hadn't had sex in nineteen years and women just kept rejecting him, which was their fault. He planned the shooting for months, but kept losing his nerve. There was a life he was supposed to have, but somehow these Not-Persons were keeping him from it. So he went to the gym and killed three of them.

And that's just one of the however-many of such Angry White Men that didn't quite score big national press.

Should we call them terrorists? The word itself has a relatively short history. Run a search on google ngram, and the word barely appears before World War I, takes a small jump at World War II, then starts to climb through the sixties until it leaps upward in the late seventies, drops in the early eighties, and then begins a roar to prominence in the late nineties.

We haven't really had a lot of time to think about what we mean when we use the word. The connotation is often something along the lines of "A not-person who wants to hurt me for no good reason." Which would explain why we rarely call Angry White Men murderers terrorists. But if a terrorist is someone who strikes out at members of a group, treating them as proxies for the larger group-- particularly if his goal is for the members of the larger group to live in fear-- then these guys qualify. Dylann Roof is a terrorist.

I'm not sure what that designation gets us, exactly, other than forcing folks to question why some killers are "troubled" and others are "evil" or "thugs."

I don't mind if we want to call them "monsters" as long as we ask ourselves some questions about what laboratory hatched them. This does not not not NOT excuse someone like Roof from responsibility for his actions. But in the wake of this terrible act, we need to ask about "the system, the way of life, and the philosophy" that made these murders seem okay to Roof. Ironically, that requires us to see him as a person in the same way that he evidently would not see Black persons.

As teachers going forward, this is a reminder of why we have to call out any and all actions and attitudes that foster a view of some human beings as not-persons. We have to charge our students to see other people as fully human. It is one of the most fundamental purposes of education-- to become fully human ourselves and in doing so, to see what is fully human in the folks we share the planet with. Where the system treats anybody, any group of people, any category of human as less-than-human, that system must be called out. Treating people as not-persons is not wrong just because it opens the door to murder-- it's wrong for so many more reasons-- but the fact that it opens the door to murder is a sign of just how wrong it is.

Email ThisBlogThis!Share to TwitterShare to FacebookShare to Pinterest
Labels: Charleston