At the NPE luncheon, I asked this room full of people how many worked in a small town school setting. 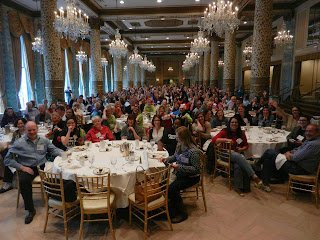 Only a few hands went up. Since then, I've been thinking about how to address the unique concerns of small town and rural schools in this space.

Then this morning an article from Dan Fishman popped up. Writing for Education Next (the more journally outlet for the Fordham-Harvard Kennedy School- Hoover Institution axis of reforminess), Fishman directly addressed "School Reform for Rural America." In some respects, he hit the nail on the head. In others, he didn't even hit the board.

Fishman starts by painting a picture of rural horror and despair. More meth abuse. Of the fifty counties with the highest child-poverty rates, forty-eight are rural. Rural people between 10 and 24 are twice as likely to kill themselves as their urban counterparts. And rural folks are more depressed. Fishman doesn't offer sources for these factoids, but he does have a chart for showing that the further you get from large population centers, the worse your NAEP scores look.

Such complex and socially entrenched ills require a proportionate educational response. Owing to a number of factors, such a response rarely occurs.

Well, yes. Fishman has a list, and it's partly correct. Let's check it out.

For every federal and state regulation, there is an equal and onerous report that has to be filed. Large urban districts can hire Assistant Administrative Assistant to the Director of Inane State Paperwork. In a small rural, these duties fall on administration desks. Just to meet the state requirements for full-on teacher evaluation process would take my building principal half of the school year. Meanwhile, he has a variety of other reports to file, meetings to attend, mandates to follow and, oh yeah, a couple of kids got in a fight on the bus this morning and it will take all day just to sort that out and head off any possible repercussions.

Fishman asserts that rural schools have trouble hiring staff. But this is just another way of asserting that certification requirements should be dropped so that schools can hire anybody off the street.

Often, the most qualified community members are barred from educating students by certification rules. A seasoned musician or painter in the community may be kept from teaching art or music by licensure requirements, even if no “highly qualified” teacher can be found and classrooms lie fallow.

Pennsylvania addressed this years ago in response to crisis-level shortages of substitute teachers. "Come be a guest teacher," the state said. With less training than a TFA temp, anybody with a college degree can become a substitute, and perhaps, eventually, a full-on teacher. There was a wave of substitutes who thought this sounded like a great deal. They arrived. They tried it. They ran away.

I can't speak to the state-wide figures, but locally about 60% of the guest teachers bailed within the first year. Within two years it was closer to 95%. This included ex-corporate and ex-military who were shocked and dismayed that a roomful of fifteen year olds did not automatically follow orders.

Meanwhile, rural areas are being forced to downsize by financial strains created on the state level, so most districts in my neck of the woods have few-to-none first year teachers, let alone positions that they need to have filled. When Fishman tells me that the world is filled with empty classrooms and gifted non-teachers being barred by dreadful requirements that they be trained and certified, I am unconvinced.

Federal grants for rural education offer jack. This is not surprising. Whether you're talking about the legislature, the union, the association of school boards, or a state principal's organization, the majority of the people in the room are there with urban concerns. And so that's what programs address, and that's how programs are designed, and every once in a while somebody tosses some crumbs to the rural folks. And as Fishman correctly notes, competitive grants are non-starters for rural schools (when, exactly, would the principal be working on that).

Online resources strike him as a good fit for rural schools, and it's true that some online resources can be helpful (though they all require reliable, powerful internet access, which is yet another rural school problem). We are a one-to-one school, and have been one for several years, and while it has been helpful, it is more evolutionary than revolutionary. The limits of the tech, the expense, the requirement for school filters, the fact that so much of what's available (including large chunks of the beloved Khan Academy) is just crap-- all of these limit the transformative power of technology.

Fishman thinks non-tech reforminess like KIPP and TFA can be great, and I'm disappointed here because it's hard to believe that anyone can still expect me to take TFA seriously. Fishman blames the rural problems of such initiatives on the lack of major philanthropy, which leads me to wonder how any program can be useful anywhere when its sustainability depends entirely on the kindness of rich strangers.

Fishman offers some examples of rural charters that work, but he devotes a whole section of the article to rural school choice.

Rural school choice? Can that be a thing?

It makes little sense to create additional schools of choice, and thereby add to the supply of school seats, when the population of an area can barely sustain one academic program.

That's probably the smartest sentence in the whole article. He follows it up by observing that rural schools haven't embraced charters with gusto because they fear consolidation. And that's not false-- one characteristic of rural school districts is that there's a high degree of identification with the community school. In many rural PA areas, the three pillars of the community are the local church, the local firehall, and the local school.

Fishman dances around another part of the problem-- charters financially brutalize the schools that they draw from. In Pennsylvania, much of the death and consolidation of local schools can be linked directly to the money-sucking vampires that are PA cyber-charters. If a small community can barely support one school, adding a charter simply means that one school or the other must die.

And while Fishman is dancing, let's note another step he's quietly ignoring-- the kind of charters that he's talking about would be set up, developed and run by people from outside. The number one reason that local rural communities don't open charter schools is that nobody in that community can think of any reason that they need a charter school. What Fishman is obliquely discussing here is whether or not rural communities offer growth opportunities for charter operators.

Add all this together and the charter scenario in rural communities is some slicker from the city driving up and saying, "Howdy, folks. I'm here to kill your beloved local school."

Fishman says "it would be wise to reconsider the purpose of charter schools in rural areas" though by "purpose" I think he means "rationale" or "marketing angle." But he's got nothing here. Maybe "to escape the oppressive hand of state regulations"?

I can offer him an example here. Up the road (in Tidioutte, PA) the local community school fell victim to financial issues in a larger district. So the local folks figured out they could keep a local school going if they just started it up as a charter. But it was a local idea, mounted and run by local people, and I don't think any investors are making money from it.

Fishman sort of half gets this as well. Those of us who teach in small town and rural settings have a fundamental question to wrestle with daily-- are we educating students to escape this area or to come back and improve it? The correct answer is, I believe, to help them do whichever they're inclined to do, but that doesn't make the larger question go away.

There are limited opportunities here for students who return, and many of those are blue collar jobs. We have a strong vocational-technical school in our county, and many my students end up with great jobs in fields they enjoy. College really isn't the solution for everyone, and it creates problems of a sort for us in that our college-educated students often can't come back here-- not and find work. The College for All push does add to a local degreed-person drain, but if you think Lack of Degrees equals Lack of Brains, you do not spend enough time talking to welders and farmers and machinists. There's an issue in here somewhere, but Fishman does not yet have a handle on it.

Fishman leads off his conclusion with a paragraph that captures most of what he gets wrong.


Large swatches of rural America are struggling to educate children effectively, develop strong economic engines, and preserve communities. An education system that is lackluster in urban America is perhaps even more so in rural areas. It fails both to educate students for college and to prepare them for post–high school careers that allow for individual flourishing without draining out a community’s highest achievers. Under the current education system, it is not surprising that so many ambitious, talented individuals leave their hometowns in order to seek more engaging and remunerative job opportunities. This need not continue to be the case. Political, philanthropic, and education leaders should focus on creating the policy conditions, supporting the entrepreneurs, and more fully integrating the industry opportunities that can best address rural education improvement.

Let's check off the embedded mistakes

And the usual huge omission-- there's no suggestion here that these philanthropic political entrepreneury education thought leaders need to involve, consult with, or amplify the voices of the people who actual live and work and lead and pursue lives that they find full, rich and rewarding in these rural spaces.