Wondering if FEE has been up to anything since Jebmaster Bush took off his FEE leader hat so that he could put on his Help Me Further a Presidential Dynasty Hat? Well, today they released the grand-daddy of fake research report position advocacy papers.

If you thought that there were some connections in the pursuit of school choice that were a bridge too far, Dr. Matthew Lardner, Senior Adviser at FEE and Senior Fellow at the Friedman Institute for Educational Choice is here to sing a few choruses of "Ain't No Mountain High Enough."

The new report-like paper product is called "Turn and Face the Strain: Age Demographic Change and the Near Future of American Education" and it is a symphony in baloney, an epic exercise in polishing the living daylights out of a weak argument that could only have been the product of a writers' room meeting that started with, "Who can come up with the most outlandishly ridiculous argument for more school choice?"

It's the little things

Okay, we've got large fish to fry here, but there are so many moments of delicious dopiness.

For firsties, the title is a misquote. The actual line from David Bowie's "Changes" is "Turn and face the strange," but Lardner can be excused because even Bowie's background singers originally messed it up. I just wanted to set the record straight. Also, the real line from the song makes an awesome title for this reporty paper-thing.

Also, there is this cool graphic to go with the report. 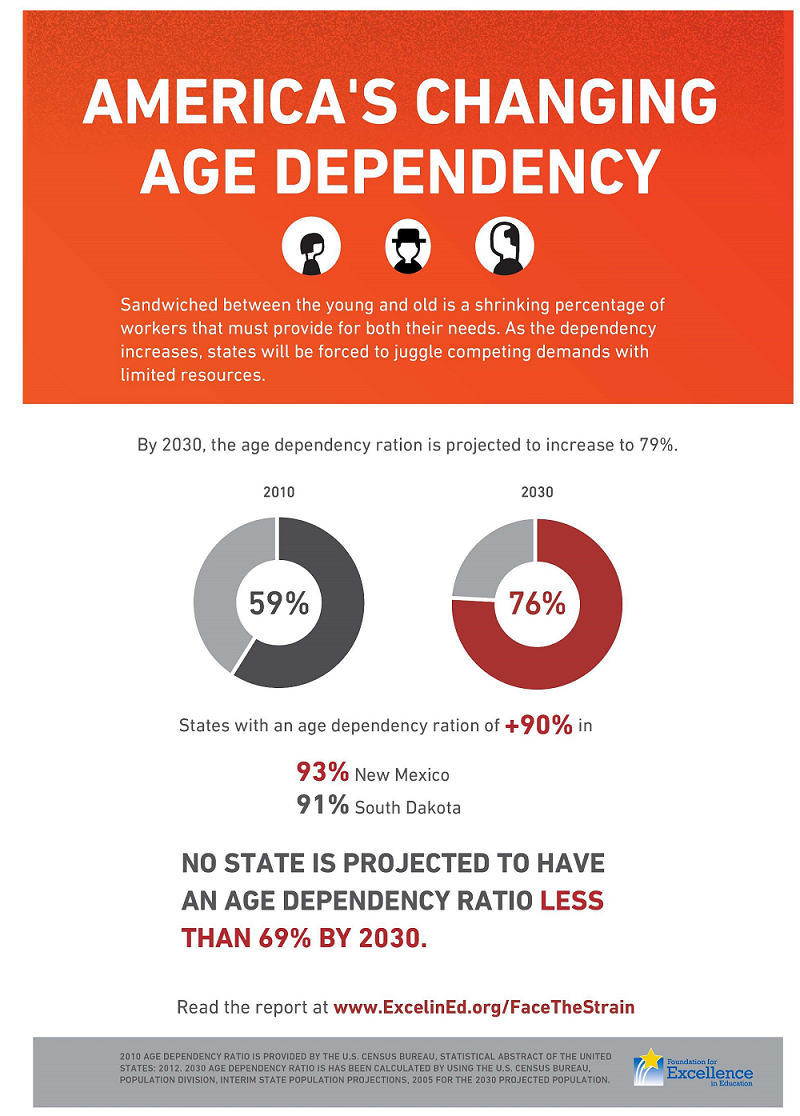 My esteemed colleague Edushyster (we while away some twitter time poring over this thing) pointed out that A) the affected parties are all white folks and B) some Amish appear to be involved. I think I'm offended that the artist decided to use baldness as a signifier for aged.

There's also a policy brief (kind of like the book jacket for the report paper thing) which warns that Hurricane Gray is going to make landfall, so I guess we need to board up the windows before we are hit by an onslaught of geeezers. I am wondering what the storm surge is in this metaphor; I'm also wondering if it's a good metaphor for a group headquartered in Florida.

Perhaps that's why FEE declares "We need policymakers to be more daring." What does that mean? Does this mean that Senators should be BASE jumping off the top of the Congressional dome? Should they drive around DC without seat belts? Should they spit into the wind and pull the mask off that old Lone Ranger?

Well, as it turns out, they should be daring and support choice, and by that FEE means a woman's choice to control her own reproductive options. Ha! Just kidding. Of course the only choice that matters is school choice, which, as it turns out, is the magic solution to everything.

So how did we get from a geriatric avalanche to school choice? Let's back up a step and look at the full report and see if we can piece this together.

Watch out for old people and babies.

"Boomers retire and send their grandkids to school" reads the headline, and that's pretty much the upshot of Part I of this argument.

Lardner introduces us to something called Age Dependency Ratios. This is the ratio of able-bodied working age folks to the combined number of slacker old people and wussy children who insist on living on some version of the dole. Lots of folks appear to compute this just using the oldsters, although most also seem to base the computation using 64 as retirement age, and I'm pretty sure that the real retirement age for my cohort is more like 82-- more if our pensions and social security are scarfed up before we get our hands on them.

Projects call for that ratio to tilt toward the slackluster old-young group, with fewer people pushing a cart full of more retirees and school children. That will probably be expensive.

Now, the reporty paper thing spends a lot of time (over twenty-five pages) establishing this, and we could spend some time picking at the numbers and how panicky they should make us (I've lost the link, but one on-line source I read showed that the projected sky-is-falling ratio for the US is lower than the ratio in Japan right now today-- update: found it).

But I'm not going to argue the point. I'll stipulate that baby boomers are getting old and retirey and that will make us collectively what I believe the economists call Pretty Damn Expensive.

And this relates to school choice how, exactly...?

The connection seems to rest on a couple of pieces of reformster baloney.

Part I is that the current generation entering their thirties are mostly dopes who did poorly on their standardized reading tests, and if they didn't get good reading test scores, then we know, somehow, that they won't be able to pull their weight in society and make sure that my cart is comfy with maybe bucket seats. At least they don't try to back this "connection" up with the fully-debunked "research" by Chetty et al.

They do note that the Age Dependency Ratio depends on the assumption that work age people are working, but this does not lead them to the question of where the jobs went for those folks to work at. Like all problems, this one has nothing whatsoever to do with a fractured economy and rampant poverty. Nor does it suggest that the 1% might want to get off their mountain of money and th9ink about how to put America back to work. Nope. That has nothing to do with it.

Also, throwing money at education hasn't helped anything. Again, don't ask them for a research back-up to this idea. Everyone, you know, just knows. But education the way we do it costs too much and makes the cart too big and heavy.

Now, they will try to back up this next action plan portion with some research because we get to school choice by referring to a study called "The Productivity of Public Charter Schools" by Albert Chang et al. This study "found" that charter schools are much more productive (assuming, as usual, that the only thing anybody wants a school to do is get students to pass a standardized math and reading test).

I have not had a chance to read this study, but Gene V. Glass of Arizona State University did take the time to review the report. We don't have to get into the fine points-- I think a couple of sentences from Glass's review will give you the drift of his gist:

Not reported is the fact that the demographic differences between the two sectors are highly correlated with the estimates of different effects; the sector with the higher percentage of poor pupils scores lower on the NAEP test. This failure alone renders the report and its recommendations indefensible.

But it's part of the foundation of FEE's argument. Education is costly, so we should use more efficient providers aka charters. Or we could have schools powered by cold fusion generators carried on the backs of hippogryphs.

Test question. The above four are:

Did you pick D? Congrats-- you are proficient! And since you have been scored proficient, we can confidently say that one less old person will die in poverty.

And just for kicks

The report also throws in a quote from Friedman right next to a photo of him looking all thoughty and heroic, like he is considering the best way to go kung fu on some accountant's ass. Are you convinced yet?

I have seen choice fans stretch to make their case, but this is going to Siberia to get a bagel. On the back of a unicorn. Edushyster challenged me to sum up the whole program in one tweet, and this was the best I could do:

@EduShyster Going 2be many poor, lazy geezers and infants; only solution is more school choice. Also, a bicycle, becuz a vest has no sleeves
— Peter Greene (@palan57) February 4, 2015


This is a monument of incoherence, the grand-mac-daddy of non-sequitorial arguments. We will have more old people, therefor we need more school choice. Because reasons.

So, twenty-some pages establishing a problem before setting up a bogus and unsubstantiated connection to their proposed solution. It's slick and pretty and well produced and one more graphic artist staved off starvation for another day, but in the end, this is 100% grade-A nonsense. Good to know FEE is able to carry on without Candidate Bush.