Let me be clear up front-- I reject the use of standardized tests to measure the education of students, the effectiveness of teachers, and the quality of schools. The best predictor of student results on standardized test remains their socio-economic class.

Oh, no, wait. In Pennsylvania, there is apparently one other factor that can predict how poorly a student will do on the Big Test.

Whether or not he attends a cyber charter.

Here's a chart that tells the story 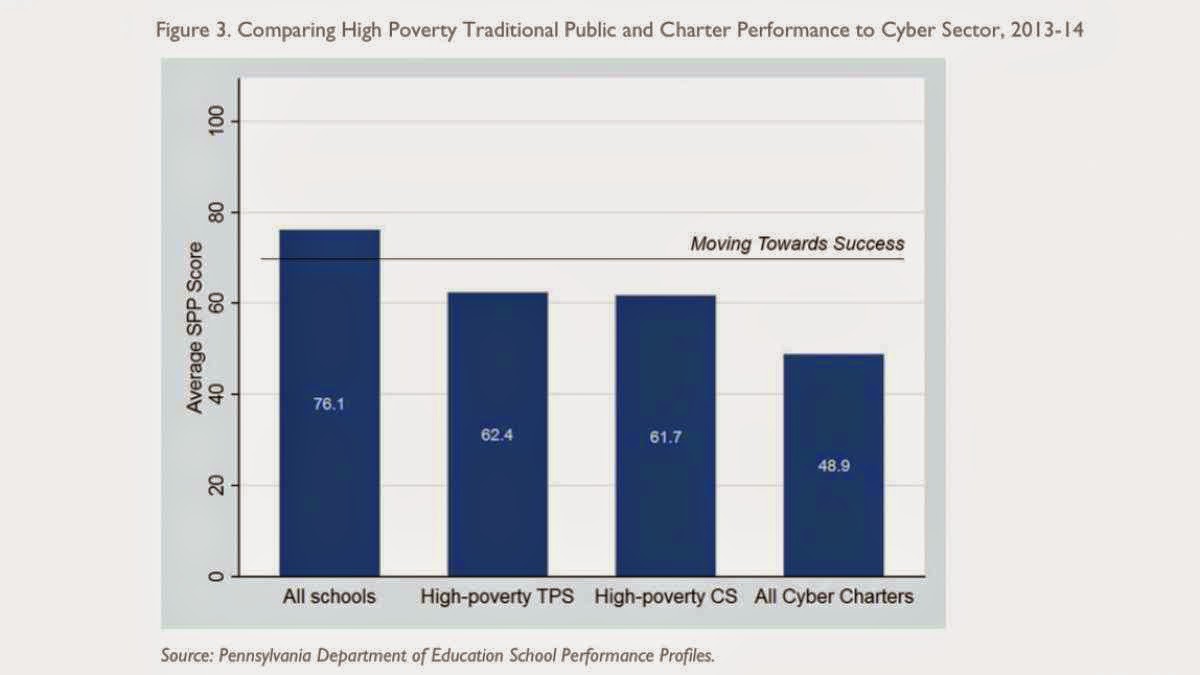 SPP stands for School Performance Profile, the data that the state keeps to judge the schools within the Commonwealth. The "quality threshhold" is 70 or higher.

Research for Action did some number crunching for a report about charter performance in PA.

The validity of SPP as a measure of school quality is suspect due to its heavy reliance on test scores that are highly correlated with socioeconomic characteristics of students that are beyond the control of schools. Indeed, RFA’s analysis of the 2012-13 SPP scores revealed that SPP scores were heavily correlated with the percentage of economically disadvantaged students in a school building.

The RFA report notes that while cyber-charters hit low percentages for English Language Learners, they have grown significantly in special education population. Perhaps that is related to the fact that cyber charters get about $8K for regular students and $23K for special education students. Do you suppose that has affected their marketing and recruiting at all?

Data is no longer available on turnover rates at cybers in PA, but the RFA report concludes that given cyber-charter's consistently terrible performance by the state's standards, the state would be crazy to authorize further cyber charter operations in the state. As I said, I reject SPP as a true measure of education quality, but if that's the rule we have to play by, then cyber charters have earned a severe benching.

The report is a good one, with more charts for those who like such things. Follow the link and read the whole thing.
Posted by Peter Greene at Tuesday, November 18, 2014