As is typical in the early stages of these things, the main news being reported from the third day of the Pennsylvania strike by college and university faculty is that this is the third day of the strike by college and university faculty. I have heard numerous reports of students joining faculty on the picket line and attempts by schools to keep students going to classes-- even if nobody is teaching them. Opponents of the faculty are trying to paint the strike as greedy teachers and evil unions, but the actual issue are far more fundamental than who gets paid what. 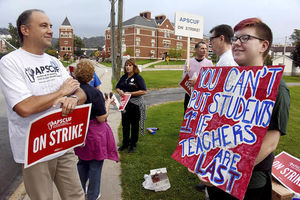 There is also the intriguing question of what, if anything, Governor Tom Wolf is up to. Prior to the strike he had some even-handed words of encouragement for both sides (Go fix this), but there's been nothing much form him since the strike broke.

However, regular reader Seth Kahn is a co-chair of the strike committee at West Chester University, and he had this to say in the comments section of my previous post about the strike:

As far as we're concerned, the most problematic proposals left on the table are these--

1. While they've withdrawn (under pressure from us, by the way) the crassest proposals about how to exploit adjunct faculty even worse, there's still one that would lower the pay scale for part-timers. The idea is to split even the ranks of the non-tenure-track faculty into full-time and part-time. No.

2. Their claims about the health care proposal (that we won't accept what everybody else has) is literal BS (not Big Standardized--the other kind). The state system *imposed the package* on their managers (who obviously don't collectively bargain because they're managers) and now are blaming us for not voluntarily accepting a package NOBODY HAS VOLUNTARILY ACCEPTED.

3. The salary proposal has been obvious since AFSCME settled a year or more ago (the system engages in pattern bargaining, so once AFSCME settles we always know what's coming). But now, the system is trying to pretend like what was always obvious is somehow super-ultra-generous, and that we're jerks for not giving them everything else they want in return.

There's no question whether Frank Brogan is trying to build a system or break a union. He doesn't give a flip about this system or the people in it. He wants a union-busting line on his resume.

There are numerous rumors out there that backchannel attempts to reach an agreement are going on, but on the record, few facts to report. Let's hope this gets settled soon.