On his blog yesterday, Bill Gates made his pitch to get more our of our tax dollars. 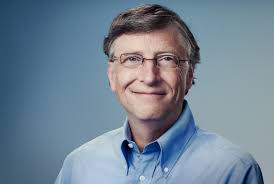 Gates notes that the Presidential campaign hasn't touched much on innovations (which I guess is true if you don't count innovative ways to repackage reality).  Invoking the 1961 moon-shot declaration of John F. Kennedy, Gates wants to make a case for four areas in which the government can spur innovation. With money.

He tries to frame this as a centrist idea by creating an imaginary extreme on one end of the debate:

I’ve heard some people argue that life-changing innovations come exclusively from the private sector. But innovation starts with government support for the research labs and universities working on new insights that entrepreneurs can turn into companies that change the world. The public sector’s investments unlock the private sector’s ingenuity.

If he means, as his essay suggests, that some people argue that the private sector does these things while refusing any dirty government money, well, I haven't heard anybody argue that. Have you heard, for instance, of any charter schools that have insisted on finding their own funding and have refused any solitary cent of government support? No, me neither.

Gates is arguing for the same old, same old-- private corporations getting their hands on that sweet, sweet pile of tax dollars to fund their enterprise. Gates is arguing that we need to elect leaders who see that the government can make progress on the issues that face us by unlocking innovation with a big fat key made out of money. He cites the space race as one of the great public-private partnerships, but what he doesn't discuss is the manner of the partnership and the rules by which it operated. It's almost as if he thinks that just throwing money at private companies will automatically fix the problems of our world.

Well, four problems of our world.

Provide cheap, clean energy to everyone (without harming the environment).

Develop a vaccine for HIV and cure neurodegenerative diseases

Again, I applaud these goals. But medicine is a great example of how public-private partnerships have come off the rails, as witnessed by medicines like the epi-pen, developed with the support of public tax dollars, and yet manipulated by private interests for maximum private profit. The world of medicine already has a very productive public-private partnership-- the private corporations reap profits and the government keeps rules in place that protect those profits, even when the profits are indefensible and involve drugs that the public already paid to develop.

Well, you knew this was here. Gates calls for "personalized education" with every child hooked up to a computer that will dispense and education. Oh, and teachers can just upload videos of themselves, because technology is never boring and students love to watch videos of teachers. Anyway, the private sector has started work on these things, but it would be great if the feds would kick in some R&D costs, because companies like Microsoft don't really have money for R&D either. Of course, what Gates really skips over here is that he's asking the government to fund a policy change, not a technological one. Gates is asking for funding to change the very nature of what school is and what it's supposed to do (train, in Gates world, rather than educate). Gates isn't just asking for federal help for private companies to create new tech; he's asking for federal cooperation as private companies set new national policy.

What is notably lacking?

You know what would help the government provide funding for all this private innovation? Tax dollars to hand out. You know who's gotten really good at not giving the government tax dollars? Private corporations.

For instance, Microsoft reportedly keeps almost 100 billion dollars in off-shore accounts, allowing it to avoid paying several billion dollars in taxes. They certainly aren't the only company doing this, so we can only imagine the amount of funding the government could provide if it had billions and billions more tax dollars with which to do such funding.

A good step toward that public-private partnership that Gates envisions would be for the private folks to do their part by helping fund the government so that it could unlock innovation with piles of money. Or they could acknowledge that they have held a bunch of money out of government reach and that money constitutes a federal tax rebate.

Mind you, I think public-private partnerships, properly maintained and managed, can be a great thing. But the whole business could start with an honest conversation. And if private companies want to be partners, they could start by acting like partners.


Posted by Peter Greene at Friday, October 07, 2016
Email ThisBlogThis!Share to TwitterShare to FacebookShare to Pinterest