Are your students worried about big stupid standardized tests? Well, Jeb Bush's shiny ed initiative has some help for you.

You may recall that Jeb Bush has been scaling up the Learn More Go Further campaign. The educational reformy initiative has been scaled up for a national audience-- it's almost as if Jeb is trying to prepare for some sort of national campaign of some sort. Learn More Go Further is what you would get if you set out to collect every bit of numbskullery ever said about the Common Core. You can read about this nifty initiative here, and follow it up with this account of their sad attempt to make use of that twitter thingy all the young folks are talking about.

My earlier attempts at shaming them notwithstanding (it's almost as if they aren't really worried about what some D-list blogger says about them), the LMGF folks have continued to crank out educational whiz-bangery including this-- a special printout guide for students who are concerned about whatever cockamamie test they are about to be subjected to.

Page one has a header of two chipper young (10-ish) students holding their bright yellow pencils-- wait! what? Are they not getting ready to take their FCATs on line? Are we not all planning to take our Big Tests on line? Maybe our intent is not to scare the children, but if that's the case, we run into trouble in the very first paragraph, which is this:

Over the past 15 years, Florida has successfully taken steps to implement policies to
increase the quality of education for students. This has resulted in vast academic improvements, made evident through the state surging upwards in national rankings.

Yes, I'm imagining the conversation between millions of third graders on their way to school on test day.

Chris: Hey, are you ready to do some surging upwards today?
Pat: Yeah, baby! Watch me take some successful steps to implement this policy!

Okay, so nobody talks like the ad copy on this flier, but you know who especially doesn't talk like that? The students that these fliers are theoretically aimed at. Perhaps it gets better, you say? Oh, honey.

Along with the hard work of teachers, students and parents, Florida’s transformation is largely rooted in accountability and assessments. A commitment to higher academic standards and aligned assessments are the next steps. By creating smarter, more efficient tests that push students to apply knowledge, students will develop greater critical thinking and analytical skills to prepare them for life after high school.

Two paragraphs in and we still haven't said a single thing that would be spoken by a real live human being, AND we've managed to wrap this verbacious gobbledeegook around utter bullshit. The impressive achievement here is that there isn't a single verifiable, supportable, non-baloney claim in this paragraph. What transformation? How do you trace the cause and effect? What is a smarter, more efficient test, and how exactly does it make students better thinkers? And why is any of this on a flier whose intended audience is students?????

And then-- oh, dear reader, oh sweet lord in heaven-- there is this. In the flier version it's just text, but Kris Nielsen located this awesome suitable-for-hanging poster version 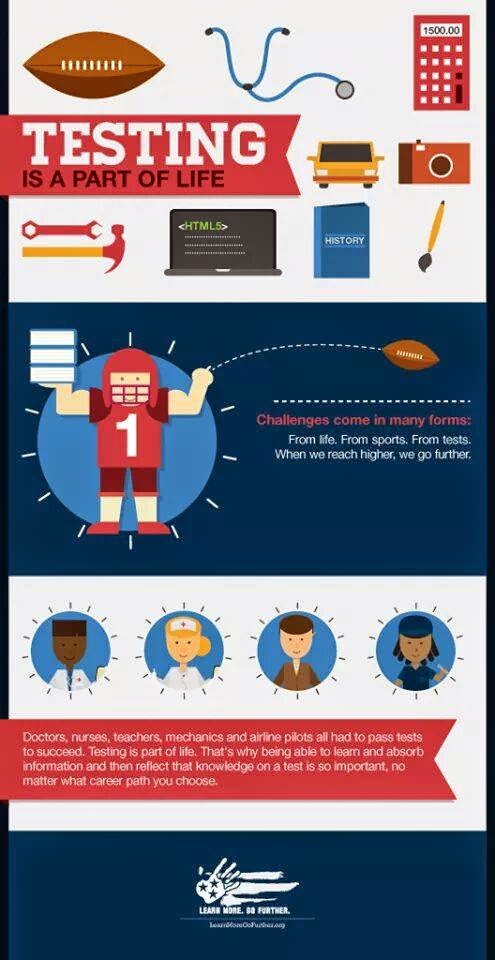 I give the LMGF folks credit for just one thing-- it looks like they might have recognized that one of the great giant gaping holes in the narrative of test-based accountability is that students can't see any earthly reason to give so much as one half of a gluteus rattus about testing.  But hey kids-- testing is a part of life! All these professionals-- all they do is just take a test and pass it and they are ready to fly a plane into surgery.

Well, that's page one. Page two has the actual tips for students facing a test. And first, to remind you that this whole thing was written by someone who has never met an actual child, we start with "While tests may seem scary, and some associated nervousness is normal, there are ways you can properly prepare to reduce stress." Yes, many's the time that teachers all the way from K through 12 have sat their students down and reassured them by looking them in the eye and saying soft, soothing tones, "Some associated nervousness is normal." I think Teddy Ruxpin used to have a chip programmed with that line.

Before the test, approach the test with confidence. Get a good night's sleep. And-- as God is my witness I am not making this shit up-- "Strive for a relaxed state of concentration." Perhaps the writer chose the elevated diction to hide the ridiculousness of the advice-- work real hard to be relaxed. And also, don't take the test on an empty stomach. Fresh fruits and vegetables help reduce stress, so pound back some broccoli for breakfast on test day. (We'll ignore the traditional advice, which is don't eat out of the ordinary because it will make you drowsy).

After the test, check your answers and make sure you didn't make any silly mistakes. Then celebrate your achievement. I'm not sure if that means on the spot, like dancing in the aisle, or after school, when you try to share broccoli farts on the bus.

What about during the test? That's the biggest list. Read and follow the directions. Don't get frustrated and/or quit. Skip hard ones and come back. Use process of elimination (which it goes on to explain, as if this specific technique isn't routinely drilled into students' heads during the weeks of test prep prior to the test). And this-- "Don’t panic when other students appear to be finished. There’s no reward for finishing first." This is true; there will, however, be punishments for finishing at the bottom of the pack, so think about doing what you can to distract and sabotage your classmates, because their success will be your failure thanks to the magic of test results stack ranking.

Presumably LMGF envisions this handout being given to every testing student in Florida. It underlines, once again, twice, how much groups like this are envisioning imaginary children taking tests under imaginary conditions that will produce results of imaginary validity.
Posted by Peter Greene at Sunday, May 18, 2014