CA: Is the Fox Guarding the Henhouse?

The Los Angeles Unified School District put away their charter rubber stamp, and it has touched off a wave of hand wringing and baloney shoveling. 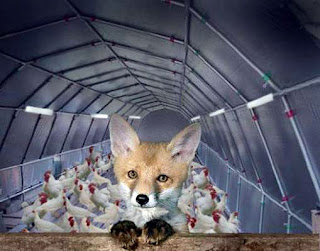 Earlier this month, the LAUSD board pulled the plug on five charters. Three of them were Magnolia schools, part of the Gulen charter web of schools allegedly tied to the reclusive cleric who is also an exiled political leader from Turkey allegedly tied to this year's coup attempt. The Magnolia chain has been accused of significant financial shenanigans, The other two were Celerity schools, a chain that has such a spotted record that even reformy John Deasy has cast a wary eye in their direction. Oversight and transparency, two important qualities that charter schools generally do very badly, were cited as issues with the five.

But the unexpected move by the board to hold any charters accountable for anything ever has stirred some folks up.

Here's a charter-friendly look at the "issue" from KPCC, the Southern California Public Radio station, that opens with the exactly wrong question:

Is the Los Angeles Unified School District able to give a fair shake to the charter schools it authorizes and oversees even though the district loses money every time a student leaves to attend a charter?

And follows it up with this mis-statement of the issue:

On Tuesday, board members addressed the underlying concern the California Charter Schools Association and others have raised in the wake of their vote: that letting L.A. Unified review such requests from charter schools — especially in an environment where the district and charters compete for funding — is letting the fox guard the henhouse.

Emphasis mine. Because I wouldn't frame the situation by suggesting that the school board is somehow out to steal money it's not entitled to.

Instead of "letting the fox guard te henhouse," let's say "requiring the elected representatives of the taxpayers to oversee how those taxpayers' dollars are used."

Some members of the board expressed frustration that the California system  allows unhappy charters to next ask the county to authorize them. Board member Richard Vladovic noted that the district would save a lot of money if charters were authorized and supervised by the state. He neglected to add having the charters financed by the state as well.

Other board members clearly get the backwardness of the system:

Charter school petitioners “who are turned down will always have a complaint,” said school board vice president George McKenna. “Their opinion will always be that they were wronged, that we weren’t fair, that the burden is on [L.A. Unified] to prove their guilt, not on them to prove their innocence.”

Yes, in California (and several other states), we've got a system in which charters feel entitled to open and stay open, drawing on public tax dollars as long as they're inclined.

There really isn't anything like this. If I want to pave the driveway to my private business, I can't demand state highway tax dollars to finance the driveway and expect to get those dollars unless someone can prove I've done something really terrible. If I want to start my own private security force, I can't bill the Department of Defense and expect them to shoulder the burden of proving why I shouldn't be paid public tax dollars.

But somehow California charters feel entitled to public tax dollars and will hold onto them until someone can pry the pursestrings out of their chartery fingers. This is not the fox guarding the henhouse; this the fox moving into the henhouse and getting indignant when the farmer shows up with an eviction notice.
Posted by Peter Greene at Friday, October 28, 2016