The Wealth Gap: Worse Than You Think

How much is whiteness worth? The answer turns out to be "a whole heck of a lot."

A new report with the unsexy title "Asset Value of Whiteness" has been released jointly by Demos and the Institute for Assets and Social Policy (Brandeis University), two left-tilted thinky tanks. The researchers used the Survey of Consumer Finances, a tri-annual data crunch sponsored by the Federal Reserve and the US Treasury Department-- so not a bunch of amateur data creators. The report is brief and in plain English and I recommend you read it, but let me hit the highlights here.

The basic message is right there in the table of contents:

Attending college does not close the racial wealth gap.

Working full time does not close the racial wealth gap

Spending less does not close the racial wealth gap


What's striking-- even shocking-- about the report is not just that these things don't help, but how huge the gap remains in the face of these.

Look at this graph: 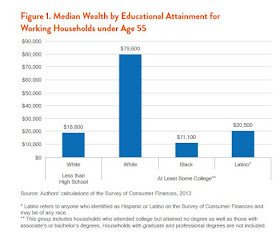 Add this data to the stack. The Brookings study that shows that a college education creates a smaller "earnings bump" for kids from poor family of origin. The Johns Hopkins 25-year study of children in Baltimore that found family background is the important predictor of future fate. Robert Putnam's entire book about the impact of social capital.

This new report considers many possible explanations for the gap, which is only fair since they've disposed of the four explanations beloved by policy makers and casual kibbitzers. Entrenched systemic racism seems like a good bet. They also suggest that white families have generations to build wealth that becomes a safety net and backstop for new generations, while black and Latino families have not had many generations at all to accomplish a similar feat.

It's also worth noting that all of these figures are medians, which means anybody who wants to cherry pick exceptional outliers can do so, thereby "proving" their own thoughts about this study. Let's just agree that it's messy, and your mileage may vary, and there will always be specific cases where these four factors are either useful or worse than useless.

That said, the overall picture is hard to explain away.

So if these four factors won't bring equity and wealth, what do we try? We've just spent years working on the theory that if we just got non-wealthy non-white to score well on a Big Standardized Test, the gates of success would fling open for them. That's baloney.

In fact, what all four of these theories of action have in common is that they place all responsibiity squarely on the individual. If you're poor, it's because you didn't go to college, didn't get married, didn't get a full-time job and didn't properly save your money. You're poor because you failed. It's your personal problem. What do you want the government to do about it?

It's not an easy question. We don't really want a government policy that makes individual responsible choices irrelevant (although, we're living through proof that if you're rich enough, you can make every irresponsible choice imaginable to humans and still end up in the White House). But it's an important question because we know that wealth is its own open door-- to everything from high test scores to a good job, and certainly to college success.

So what do we do?

One of the first steps is for lots of us to recognize that we are not nearly as self made as we like to imagine, but that we are standing on the shoulders of our families and ancestors and a system that doesn't drop a lot of onerous extra weight on us. We need to recognize this not so we can just feel guilty all the time, but so that we can A) stop repeating the fairy take that we don't owe anybody anything and so Other People should just step up and grab their bootstraps and B) start figuring out a way to provide that kind of shoulder-standing platform for people who don't have one.

We can stop imagining that a good school fixes everything, and we can stop imagining that student success is a personal problem for the student and her family. The absolute very least we can do-- must do-- is make certain that schools are not making matters worse by providing less for non-white, non-wealthy communities, by treating these communities like marketing opportunities or communities that must be saved by Better People. We can stop approaching non-wealthy and non-white families as if the fact that they have less means they deserve less-- an attitude that leads to either trying to keep them from getting things they don't deserve (oh, Those People act so entitled) or to acting as if we're so awesome because we gave them something they didn't really deserve (how generous of us to give this gift to those who haven't earned it).

I'm pretty sure we're past the point where concerns about social justice are going to drive federal education policy; I expect we'll now err in the direction of bootstraps. We'll talk about "opportunities" and "access" and declare that we gave non-wealthy non-white kids the same chance to succeed as the rich kids. We opened the door and if they didn't walk through it, well, hey, that's on them. We may even hear complaints about how "entitled" and "uppity" them poor folks are acting.

So it's important that those of us who work in school, those of us who have to make choices about how to blunt the impact of policy-makers' bad policies-- it's important for us to remember that it's not just about individual choices. You can be the hardest, fastest runner of them all, but if you have to run barefoot and start a half mile behind the starting line, it's not going to be enough.
Peter Greene at Friday, February 10, 2017
Share